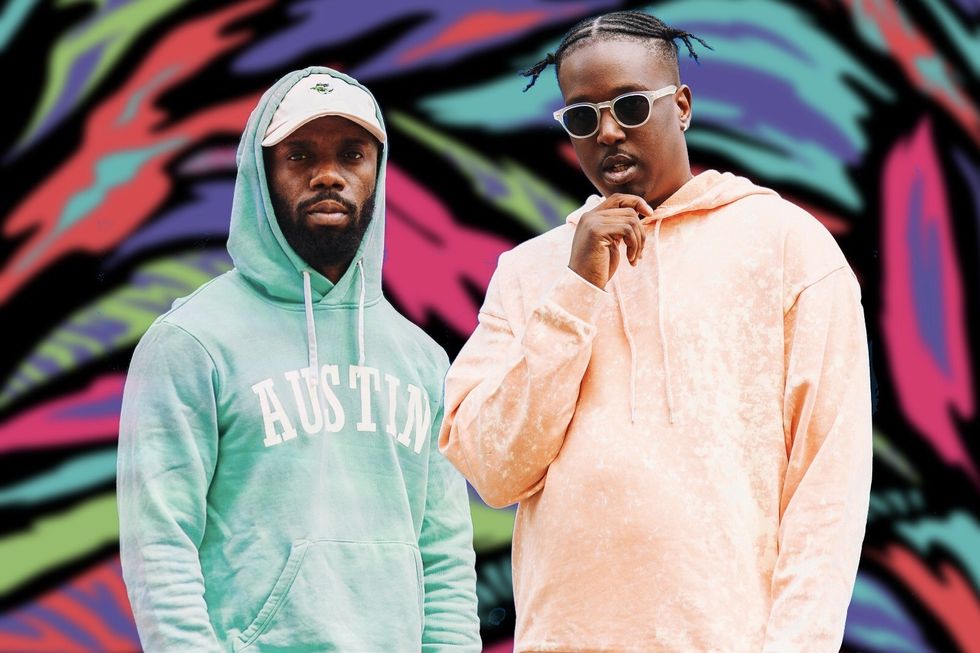 We talk to the production duo behind massive tracks like "Drogba (Joanna)" and "Vroom."

Team Salut is the sought after producer-artist duo made up of GPK and Mr Wood.

The group has made some of the biggest hits in the UK's afrowave scene that include "Vroom" for Yxng Baneand "Drogba (Joanna)" for Afro B. They have also carved out a solid reputation for remixing popular hits like "Babe" by Emeli Sande—their own remix of "Drogba (Joanna)" featuring Wizkid has become one of the smash hits of 2018.

OkayAfrica sat down with Team Salut before a studio session in London to talk about their growing fame, the influence of afrobeats and their new direction as artists since the release of their new single "Drive and Motion."

You've just returned from a music camp in Sweden. What exactly was the purpose of the trip?

GPK: We're at a point where we're really interested in getting some artist that you may not suspect we'd worked with, for example, Team Salut featuring Zara Larsson. That's kind of where we're heading now so in order for us to get the pop record itself we went to Sweden to source the pop writers.

How did "Drogba (Joanna)" for Afro B come about?

Mr Wood: Before "Drogba (Joanna)" we were working with Afro B for four years just developing. He was doing more of the UK stuff. He had a huge success with "Juice and Power" with Yxng Bane. There was something in us that said we need to go back to afrobeats because that's where we met and that's where his energy is. I mean his name is Afro B, so it makes sense. Making "Drogba (Joanna)" couldn't have taken more than 3 hours, start to finish. Afro B reached out Didier Drogba's family, they played it for him and he loved it.

You've done house, afro-swing and many other genres. Why have you come back to afrobeats?

GPK: I don't think we ever left it. We move between the two. If you hear some of the remixes that we do like "Babe" with Emeli Sande and Afro B, you can hear the African guitars, the drum pattern. It's just certain rhythms that we choose to bounce to. For instance "Chance" by Davido and Eugy. Those drums were heavy and you even have a lot of the Nigerian artist saying we don't do drums that heavy back home. We don't go away. Sometimes we choose when we go hard with it or move along and come back to it.

Explain how exactly you work together while in the studio?

GPK: If I get to a certain point and say I'm happy with this and maybe Mr Wood has an idea for how he can improve it or change it or maybe even take something out. We're always open to exchanging ideas.

Of the three big singles you've produced—"Vroom," "Drogba (Joanna)," and "Drive N Motion"—which has brought your more success and how do you define this success?

GPK: They're all big in their different ways. "Drive N Motion" is more significant for me because I've been looking forward to putting something out just to show people what we're about vocally and production wise, and "Drive N Motion" demonstrates that. "Vroom" is an anthem locally, whereas "Drogba (Joanna)" is an international anthem; it's in Canada, Sweden, France and even Panama, Tanzania and obviously Nigeria.

Mr Wood: The great thing is that we're part of the same team, same management (along with Afro B) and we grew up together. "Drogba (Joanna)" is growing very very fast. It's not stopping, it's everywhere. It's carried the Team Salut name further. Sometimes that can benefit in the grand scale of things better because you don't want a quick hit and you're gone. You want something that keeps going and goes further .

There's been a lot of debate about whether the music you make is "afro wave"or "afro swing." Which one is it?

GPK: We probably need to clear that up. The term "afro," when to comes to music describes a vast range of sounds. It could be a tribal sound, it could be afrobeats. There's so many genres. Once you start to mix them with your contemporary mainstream sounds then you've got a different sound in itself. It will then be even difficult to give it a new name. Because there's so many ways a hybrid can go. You'd have to have so many different genres. I don't feel like it's always necessary. It's like when I hear people say "neo-trap-dubstep." I get that it's hybrid, just say that. You don't have to say everything that inspires you. I guess that why the "afrowave" makes sense because it encompasses all the inspirations into one but I guess the main inspiration is "afro."

But that's being too clever because you get to be "Afro" and you also get to change whenever you want and never be recognised for one sound or era.

Mr Wood: (Laughs) As it goes on, people will get to know the brand rather than trying to pinpoint us. Even with our unreleased music we're fusing things together. As we go further people will just get used to us being able to switch it up.

You're both raise in London to families from Sierra Leone and Ghana and will have been exposed to highlife as well as contemporary black music. How much did your background play in your music today?

GPK: I think it's a merger of different things. When we were in college and we were in the choir and parties and stuff, afrobeats or highlife was what you heard at hall parties and community centres—but it wasn't as if we young people played Daddy Lingo at home or something like that. We listened to maybe dancehall at the time because it wasn't cool to be African. It was dancehall and hip-hop and later on we got into garage, till later on when the music became cool in Africa and as it went on, it drew our attentions around the time we were making music and that kind of influenced what we do today.

We've seen Wizkid sell out Royal Albert Hall and O2 Academy in London. We've seen Davido sing to packed stadiums in Suriname and win numerous international awards. How much bigger can "afrobeats" and "afrowave" get?

GPK: I think it's only due to grow. It's the beginning. The way we make music and the way i intend to make music is to make borderless songs."Drogba (Joanna)" is known in Panama, a whole stretch way in South America. And we also have an entire continent in Asia which has most of the world's population. I see the sound spreading far and beyond.

You're no longer a trio. Why is Side Chain Manny no longer part of Team Salut?

GPK: We were together for four to five years. Some issues happened and we reformed to two. Now that things are about to bubble and boil, it's at a good stage where we've figured ourselves out.

Will Side Chain Manny be fine?

GPK: As long as he puts in the work, and gives it the passion it requires.

What are the forthcoming releases you have planned?

Mr Woods: There's the Tion Wayne "Loverman" single that dropped in late August and we've also got a double release with Afro B "Shaku" and "Melanin" coming soon.