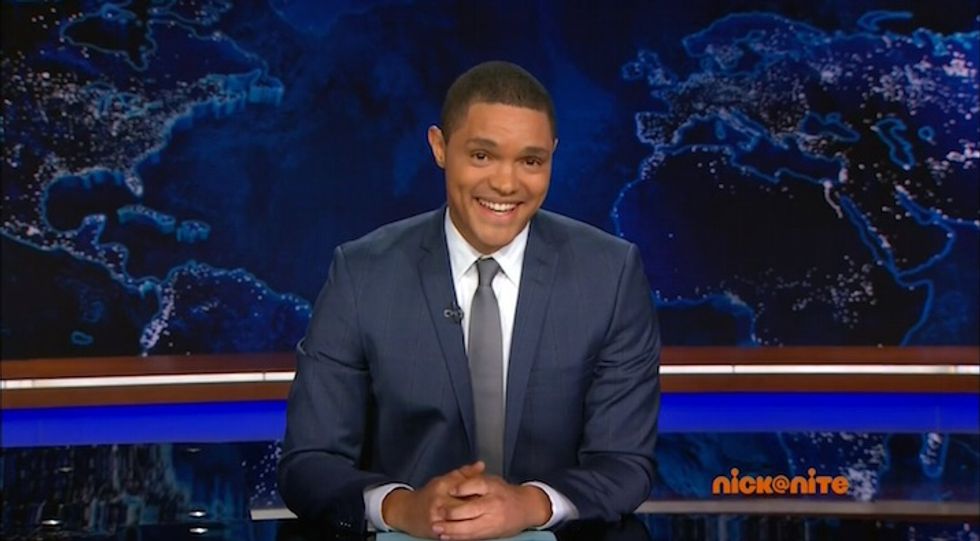 Trevor Noah officially began his tenure as the new host of The Daily Show tonight with special guest Kevin Hart.

"Before we get started, I just wanted to say a few things," began the 31-year-old South African comedian in his opening monologue. "First of all, this is surreal for me. Growing up in the dusty streets of South Africa, I never dreamed that I would one day have two things really: an indoor toilet and a job as the host of The Daily Show. And now I have both, and I’m quite comfortable with one of them.”

Acknowledging his predecessor's legacy, Noah referred to Jon Stewart as "more than just a late night host." "He was often our voice, our refuge, and in many ways our political dad," he said. "And it’s weird, because dad has left. And now it feels like the family has a new stepdad, and he’s black. Which is not ideal.”

He also addressed concerns as to why Comedy Central didn't select a female host. "Well it turns out that Comedy Central did ask women to host," he noted. "The women they asked turned the job down, because they all had better things to do and clearly knew something I didn't." He continued to speak on how the network also attempted to hire Americans to host. "Again, Comedy Central tried, and those people also declined. And so once more, a job Americans rejected is now being done by an immigrant." Noah joked.

In a nod to Stewart's closing remarks as The Daily Show's host, Noah thanked returning and new viewers alike for joining him as he continues "the war on bullshit."