'The Gaze On Agbogbloshie,' Misrepresentation At Ghana's E-Waste Dumpsite: 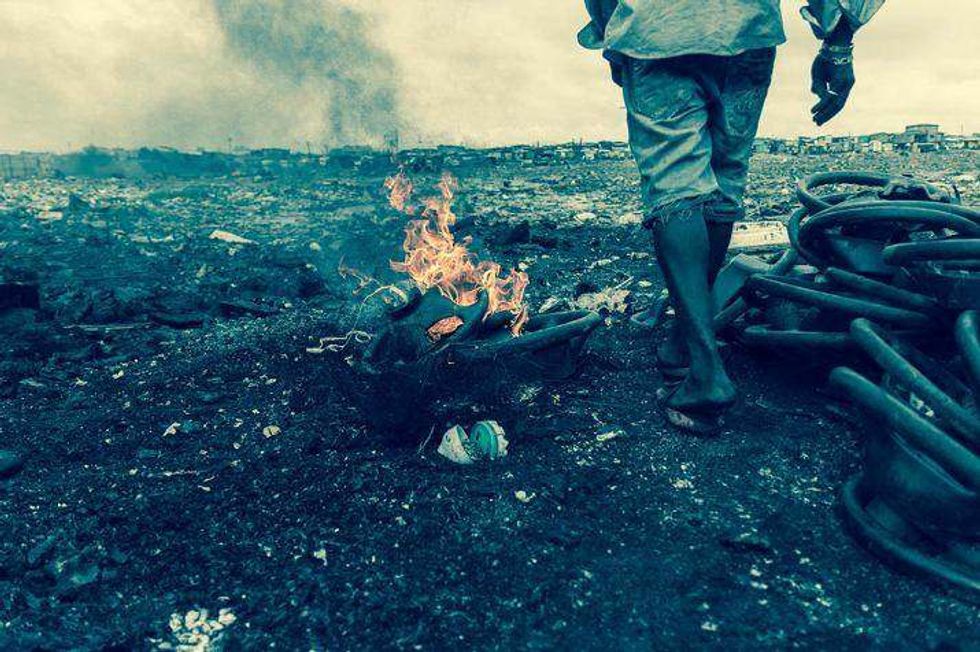 Heather Agyepong explores misrepresentation at Ghana's e-waste dumpsite in her photo series 'The Gaze On Agbogbloshie.'

Ghana's Agbogbloshie, the notoriously large e-waste dumpsite, has become an increasingly popular site for journalists over the last decade. Consequently, it's also been a source of deep misunderstanding, according to Ghanaian-British photographer and visual sociologist Heather Agyepong. Her photo series The Gaze On Agbogbloshie explores the misrepresentation of Agbogbloshie and its socio-economic reality. We spoke with Agyepong, who is currently studying for an MA in Photography and Urban Cultures at Goldsmiths College, about her work in Agbogbloshie as well as the "western gaze" on African issues. Read on for the full Q&A and see a series of images from the project in the gallery above. Agyepong's photos will be featured in Habitus, an upcoming exhibition showcasing the work of MA Photography and Urban Cultures students from Goldsmiths, University of London, October 20-25th at the Menier Gallery in London.

OKA: How would you describe Agbogbloshie to our readers?

Heather Agyepong: Agbogbloshie was declared as the world’s largest e-waste dumpsite in 2014. The area is approximately four acres and is home to 30,000 Ghanaians. Agbogbloshie is located around the banks of the Korle Lagoon and close by to Accra’s Central Business District. The majority of its inhabitants are from the northern regions of Ghana who have a significant history with the land. Prior to the influx of e-waste, Agbogbloshie was a wetland known as Old Fadama. Between the 1980’s and early 90s, northern Ghanaians migrated to Old Fadama in search of refugee from war and tribal conflicts. During the late 90s the landscape began its transformation as western countries started sending second hand electronics as donations to assist their developing economy, however the turnover rate of electronics began to accelerate faster than ever before and these donations eventually materialised as e-waste.

OKA: Why has it been a site for European journalists, researchers and photographers?

Heather Agyepong: The area receives regular visits from European journalists, academic researchers and photographers who frame their works according to a historical distortion of the African identity. The young boys who reside on the site are the most exploited group in the informal hierarchy of the recyclers. Images, interviews and even blood samples have been obtained in exchange for help. However, the majority of these researchers do not return or contact the boys after the data has been collected. European visitors seem to be drawn to Agbogbloshie as its initial aesthetic depicts the stereotypical narrative of the poverty stricken Africa. Visions of child labour, dirt and disease are reported back to a western audience, adding to their one dimensional understanding of Africa.

Okayafrica: How did you get into your research on Agbogbloshie?

Heather Agyepong: As a second generation Ghanaian, I have always felt a personal and moral obligation to challenge our current understandings of Africa. In a way this project is one aspect of a life-long research. Growing up, I often felt a slight sense of shame about being an African as the connotations of Africanism attributed to poverty, humanitarian intervention and disorder. Until I visited Africa for myself, I too believed there was no hope for the land and that they would continue needing western aid to prolong its survival. The e-waste dumpsite illustrated the west’s direct production of economic and social crisis in Agbogbloshie which exemplifies the west's contribution to the problems faced in Africa. However, the current framings of this issue are far more long lasting and thus damaging to our ideas of Africa and to further its detriment. These implications urged the importance of this enquiry; a motivation to uncover a voice that I believe is widely ignored in our relationship with African issues. This personal connection was both beneficial and difficult as it gave me a strong work ethic regarding the ethnography but left me emotional effected by the discrepancies in what I discovered about life in Agbogbloshie.

OKA: What were your findings?

Heather Agyepong: Agbogbloshie is portrayed as the continent’s largest electrical wasteland; in truth it is a functional, profit-making recycling network. The conditions are harsh and pollution is rife but its inhabitants manage to live, work and save money for their families. There is an increasing tension amongst the inhabitants of Agbogbloshie about how they are being represented within western media. They have seen images and interviews of themselves which they feel have been misused for financial gain. The people who live in Agbogbloshie are angry and frustrated with the constant broken promises from western visitors and want to tell their story: the site is not a wasteland but a functional, sustainable, recycling network where obsolete and broken commodities from the West are rescued and reused in Agbogbloshie.

OKA: What was your editing process like for the photos?

Heather Agyepong: The images were manipulated digitally to exaggerate the dystopian aesthetic. I wanted the images to represent how the western gaze distorts the representation of Africa and how particular scenes are appropriated. It was very much a collaborative approach to the visual work as I ask the inhabitants what images they wanted me to capture and what they wanted people in the west to see. Any images that they did not agree with were not used in the final set.