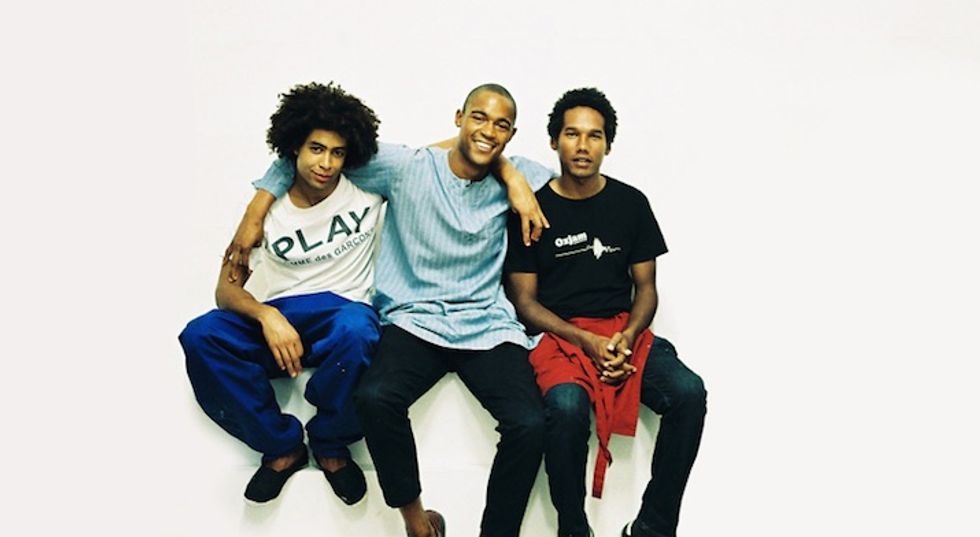 Photo courtesy of The Groundnut

Anyone who saw the online reaction to Jamie Oliver’s Jollof Rice last year will know African cuisine is not something to be trifled with. Despite its devotees around the world, African food has been curiously absent from restaurant menus and bookstores in the UK. Even in London, where you're just as likely to find maggi and shito sauce on the supermarket shelves as you are bisto and marmite, the boom in food festivals and supper clubs has favoured North African tagine and East Asian fusion.

Drawing on their individual backgrounds, Duval Timothy, Folayemi Brown and Fodio Todd started The Groundnut as a supper club in South London serving up their own unique recipes and cocktails alongside old favourites like mandazi and plantains. Having convinced Londoners to travel south of the River for their events, the trio are now sharing their recipes in a self-titled cookbook of contemporary African recipes. Okayafrica caught up with The Groundnut guys before their official book launch at the Brixton Cultural Archives.

Seonaid Weightman Murray for Okayafrica: What brought you all together and why did you decide to start The Groundnut?

The Groundnut: The three of us are old friends and we’ve known each other for ages. After studying at university we decided to put our minds together and after a few meetings The Groundnut was born. We haven’t looked back since.

OKA: How were your recipes received by people at the supper clubs?

The Groundnut: People love the food and overall experience at our dinners. We serve everything banquet style so everybody shares the food amongst themselves which contributes to the warm atmosphere at the table.

OKA: Your supper club menus have included sweet Yorkshire pudding and ugali noodles as well as jollof rice, salt beef and injera. Did you always intend for The Groundnut to present so many diverse flavours and cooking traditions? Where do you take inspiration from for your cooking?

The Groundnut: We champion African food which offers a hugely diverse group of ingredients and cooking techniques. The Groundnut serves as a platform where we can explore and celebrate these similarities and differences. A lot of the dishes are classics such as Jollof rice, which we cook as we grew up eating it. In other cases we try to make the most of the different qualities that an ingredient has, whether it’s colourful, hard, soft, sweet, bitter, elastic or crunchy. One of the recipes that you touched on is the sweet Yorkshire pudding. When you break it down it’s pretty much like a pancake, and absolutely neutral, so why not dress it up as a sweet using mango. That same process has contributed some of the more interesting recipes in our repertoire, like a sweet pepper ice-cream and our ‘lady in disguise’ recipe.

OKA: Did the supper club set-up give you more flexibility in preparing menus and coming up with new recipes?

The Groundnut: Yeah, we often leave a little time between dinners which we prefer because it allows us to change things, both in terms of the space and the food that we serve. Developing these things takes time and we always take ours when we’re preparing for a run of dinners. Each and every dish goes before a panel - first satisfying yourself, then whatever family or friends are at hand, then the other guys - before it makes it to The Groundnut dinner table.

In between we’ve also been able to pursue different things, both individually and collectively. If we had a full-time restaurant I don’t think we could have invested as much time as we did into developing our cookbook, for example.

OKA: What have been the highlights of The Groundnut so far and do you plan to continue running supper club events after the book launch?

The Groundnut: Taking The Groundnut to Paris was a highlight. That was the first time we were officially away on business and the dinners went down well.

Yes, we’ll continue with dinners. We’ve got ‘Groundnut Season’ coming up from September onwards. We’ll be holding dinners in South London for a few nights a week through to December.

OKA: The book launch is taking place on the 2nd July at the Black Cultural Archives in Brixton. Brixton Market is one of the best known in London selling fresh produce from the Caribbean and West Africa alongside local farm produce and halal butchers. Was this tradition of kaleidoscope food cultures a factor in you picking the BCA? Do you see yourselves continuing South London’s food culture?

The Groundnut: Brixton market is full of life. We also love Lewisham and East Street markets for similar reasons. The Black Cultural Archives is a perfect fit because of the location and also what it represents. Hopefully we can go some way to contributing with a little bit of history in the making.

Naturally by living and working in the area we’re part of south London’s food culture. I know from feedback that we’ve brought a fair few people to Deptford and Lewisham for the first time.

OKA: Whats the next step for The Groundnut?

The Ground: Our cookbook launches on the 2 July. From then on we’ve been invited to contribute at the ‘One City One Day’ exhibition at the Tate Modern on July 25. Then we’re back with ‘Groundnut Season’ from September onwards. You can get tickets from our website.