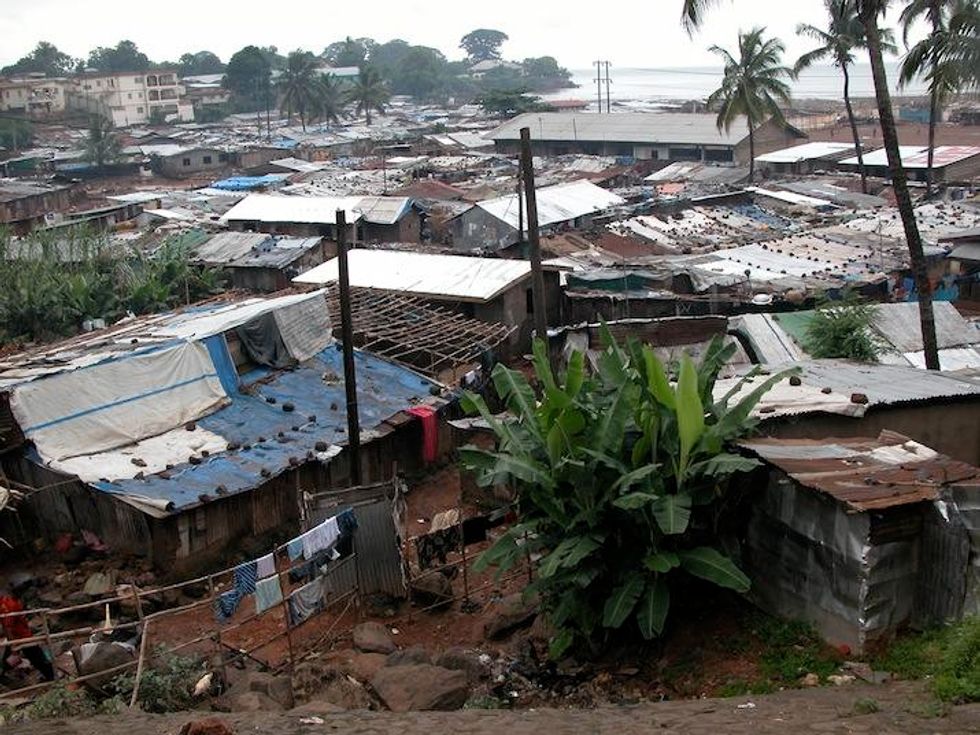 "The Incompetence Of Sierra Leone’s Ruling Class Is Destroying Our Ability To Develop," An Op-Ed By Augustine Sorie-sengbe Marrah

Sheka Forna’s op-ed, “Ebola: A Wake Up Call To Sierra Leone’s Upper Class,” is one of those brilliant yet rare writings emerging from the ruins of the Athens of West Africa –as Sierra Leone used to be known– that can inspire younger folks to spill the ink and not the bullets. On learning that the writer shares a pedigree with one of my favourite contemporary Sierra Leonean writers, the renowned novelist Aminatta Forna, my obvious conclusion was that literary artistry was infused in their veins. With that being said, it is not because I belong to “the upper classes” or “the privileged” (which I am indeed a member of) that I have risen to retort to his discourse. And my response must not be misconstrued for an ‘Us (home) vs. Them (diaspora)’ thread in terms of the superiority of ideas for our nation’s development. It is because I believe that until there is a sincere harmonization of both local and international worldviews on sustainable development for Sierra Leone, we will never be able to hoist our nation from the collective “precious little” that it now represents. The ebola epidemic currently ravaging our country offers yet another opportunity for both local and international synergy of ideas and resources.

Let me agree with the author on the categorisation of the upper classes or “the privileged” to save my response from a mere disagreement on that social taxonomy. I entirely agree that those professionals (doctors, bankers, accountants, business men/women etc.) do belong to the upper echelons in terms of the quantum of knowledge and information memorised across the years from textbooks (which, sadly, tell us little about our peculiarities as a people and the nature of our political and economic cultures). Despite their heads being full of theories from English and French to German and Italian methods, and their abilities to recite mathematical solutions off-hand, a significant portion of these categorised professionals still grab paychecks equivalent to wages of the most unskilled jobber in developed countries. As such, Mr. Forna’s piece puts forth an overly broad categorisation of the privileged or upper classes, and thus leaves open the chance for generalisations (usually committed against Africans in the pomposity of the ignorant writings of the West). This is evident in the author’s portrayal of the upper or privileged class as all living lavishly and so forth.

But has the non-ruling group of privileged citizens turned a blind eye to poverty and the absence of development in our surroundings? I do not think so. Rather, the incompetence of the political environment, created and sustained by the ruling upper class, has inserted politics into every attempt of the non-ruling class to effect change, to the point that genuine non-political efforts and interventions are frustrated with layers of unnecessary bureaucracy. Because the ruling upper class seeks at all times to score the next political point via sham development drives and the co-option of humanitarian donations, the non-ruling upper class is confronted with an overabundance of red tape if they attempt to develop an initiative on a neutral political terrain. The ruling class thus ensures that they are the sole conduit to deliver “services” and “aid” to the masses, and that the only way to grow, to develop, to think and to contribute is through a political process.

Meanwhile, the people beneath the entire upper class/privileged bracket (who are mostly under the throes of poverty) have been oriented and cultured by the ruling upper class to be receptive only to political ventures, drives, initiatives, and donations, and to be suspicious of non-political gestures. Any contributions made by the non-ruling class are overshadowed by the aggregate of decadence and incompetence of the ruling class.

Do I think the non-ruling upper class has resolved to separatism from the stark poverty and the economic predicaments of the have-nots by their high fences and thick metal gates? I do not think so. The ruling class has unconscionably purloined the meagre resources of our country, resulting in entrenched poverty, despondence, and deepening disgruntlements in the toiling masses. Ultimately this leads to the non-ruling class being forced to protect their homes and hard-earned possessions with high walls and secure gates from the brutish extremities of a disadvantaged people struggling to keep oxygen coming into their lungs. The same reasoning holds true for our educational system: the siphoning off of funds by the ruling class to fund their political campaigns (which helps to keep their children in the lavish of western education) has resulted in the plummeting educational standards of our country. Thus the ruling upper class has collapsed the educational system here (since their children are being schooled in the west); the non-ruling class, aware of the cycles of impoverishment if their children were left in the nose-diving standards, work very hard (usually paying for extra lessons for the kids at home) to educate their children at home or abroad. Are they to remain patriotic and keep them in the schools crumbled by the patent thievery of the ruling-upper-class?

Have I made a case for excusing the non-ruling class from a daily commitment to changing a nation distorted by the total embrace of political dogmas inimical to growth and development? I do not think so. While the ruling upper class has been blind to or complacent in the face of a dire poverty that chips away at our humanity with every passing day, there is so much to be done, and it takes an uncompromising spirit and a fanatic resolve to uproot the fetid politics of anything and replace it with the development of everything. We also must not disregard the small feats that people have indeed achieved within their communities by a generalization of complacencies that exist within “the upper or privileged class.” And we need to recognize that while extra-judicial executions of critics of the government have become a thing of the past in our society, individual voices from the non-ruling upper class continue to be branded opponents, brow-beaten, intimidated and cowered into silence.

I agree that we must continue in our engagements with the ruling upper class –those people who actually control the future of our country – and sow the seeds for a renaissance that can only be delayed, but not denied, the people of Sierra Leone; a people whose story is a darkly beautiful symphony of rising poverty and scourging epidemics against the horizons of growing corporate investments.

Augustine Sorie-sengbe Marrah is a Barrister & Solicitor of the High Court of Sierra Leone, an associate at Yada Williams and Associates firm of solicitors, a human right scholar and a freelance writer.