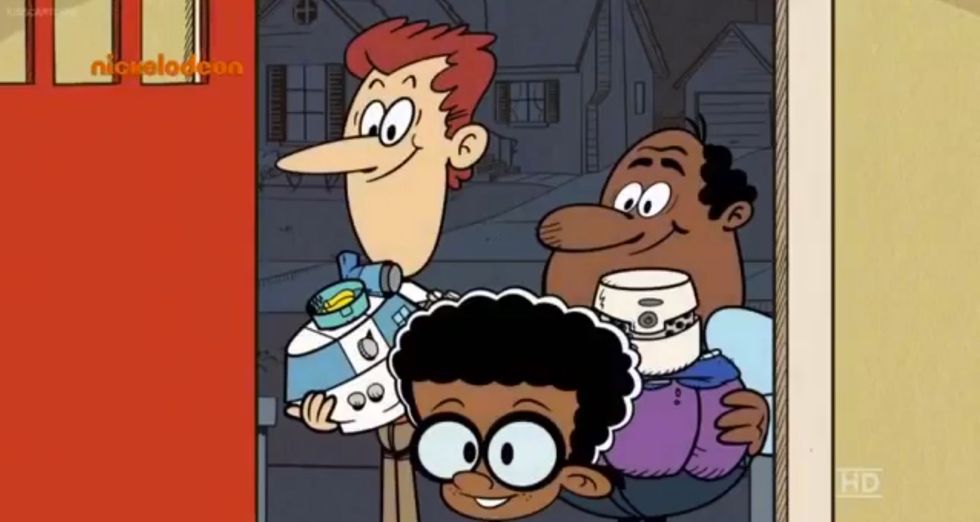 While much of the world celebrated the first LGBT couple in a Nickelodeon cartoon, Viacom Africa censored the gay dads from broadcasting on the continent.

Kids tuning in to Nickelodeon across the continent won’t get to see two gay dads on the network’s animated series, The Loud House. Why? According toViacom Africa, showing a gay couple in a cartoon is inappropriate for its Africa audience.

The episode in question features a bi-racial, married gay couple (voiced by Wayne Brady and Michael McDonald) who, in a short clip, are seen dropping their son off at a sleepover party. Titled "Overnight Success," the groundbreaking episode debuted last Wednesday. But while much of the world celebrated Nickelodeon’s historic decision to finally portray LGBT people in animation, what should have been a beautiful moment was marked by dispute on the continent.

Speaking with Channel24, Viacom International Media Networks (VIMN) explained that the episode was pulled in South Africa, where gay marriage has been legal since 2006, due to "regulatory codes in certain markets". Because VIMN has only one feed that broadcasts to the entire continent, South African viewers are being subjected to the same censorship laws of a few other African countries. As Channel24 explains, if VIMN were to air the episode, they would be breaking the law in several other African countries and risk losing their broadcasting licence.

VIMN did however tell Channel24 that the episode will be available to stream on www.nickelodeonafrica.com and to watch on the South Africa-based DStv Catch Up.

In South Africa, censorship is back in the spotlight. The nation’s public broadcaster, SABC, recently made the controversial announcement that it will no longer broadcast footage of violent protests.

In May, MultiChoice's DSTV, the same platform on which Nickelodeon broadcasts, was forced to remove the second season of I Am Cait after it was banned in Nigeria by the Nigerian Broadcasting Authority.

But the thing is, in order for progress to be made, gay visibility is the key to eradicating prejudices against gay people. We need more gay visibility in our media. It’s vital to the fight against homophobia that our media more accurately reflect our gay populations.

And while it’s true, there’s been massive progress made with regards to gay tolerance and rights, especially in South Africa, we have a long way to go. Gay parents are still being censored out of TV shows.

VIMN's decision ultimately reinforces the idea that gay parenting is not right, that it’s something to hide. As a broadcaster, they have an obligation to not simply entertain, but to inform. Gay parents are a reality. In fact, some of the children watching the show may have same-sex parents.

Broadcasters and media houses must remember it’s their duty to go beyond entertaining their audiences. Censoring gay fathers or violent protests doesn’t erase them from real life.