'Tickling Giants' Is The Powerful Story Of "The Egyptian Jon Stewart," Bassem Youssef 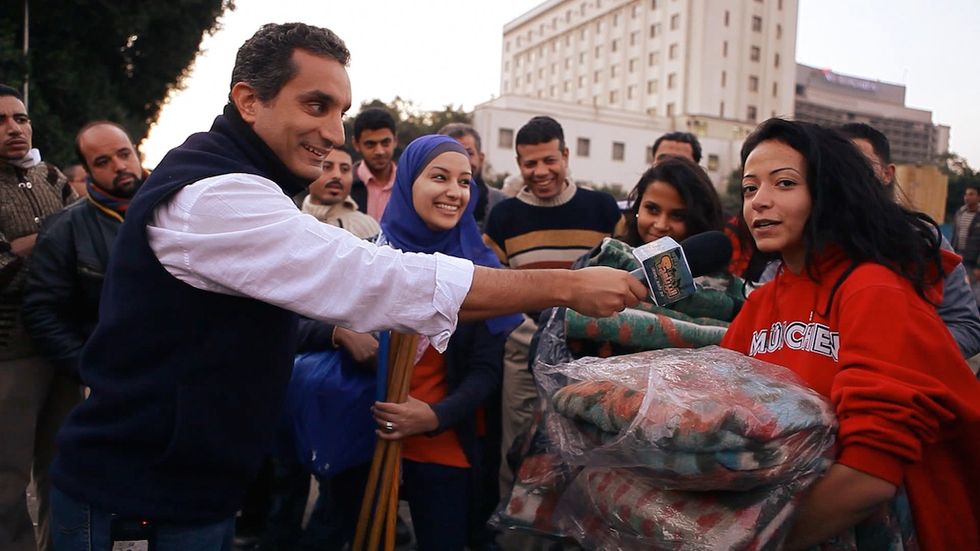 Egyptian political satirist Bassem Youssef is the subject of a new documentary by 'The Daily Show' senior producer, Sara Taksler.

For Bassem Youssef, satire is the weapon. In 2011, shortly after the start of the Egyptian Revolution, Youssef, then a heart surgeon in Cairo, was treating injured protesters in Tahrir Square. It was during this time that he and a friend started a YouTube show modeled after Jon Stewart's Daily Show.

It wasn’t long before the rookie talk show host made the decision to leave his career in medicine to become a fulltime political satirist. Comedy proved to be his ultimate remedy for the Egyptian people. With wit and humor as his ammunition, Youssef set out to challenge authorities and the state-run media while testing the limits of free speech in a post-revolution Egypt.

His weekly program, Al Bernameg (“The Show”), quickly became the biggest television phenomenon in the Middle East. The Daily Show With Jon Stewart’s two million viewers per night paled in comparison to the 30 million Egyptians who were tuning in to see Youssef poke fun at Morsi, Mansour and el-Sisi.

The series landed its host in New York City in June 2012, where Youssef had the opportunity to shadow Stewart at The Daily Show. While there, “the Egyptian Jon Stewart,” as he’s since been known, met Sara Taksler, Senior Producer at The Daily Show. Taksler, whose previous work in film included an acclaimed documentary about balloon-twisting conventions, was intrigued. She asked Youssef if he’d be the subject of her next documentary. Youssef agreed.

And so for the next four years The Daily Show producer followed Al Bernameg’s host and staff in Cairo, documenting Youssef’s divisive rise and subsequent fall in a time of political and social unrest in Egypt.

“The stakes were incredibly high, but they found a way to have their voices heard without hurting anybody else,” Taksler tells me over the phone. At the time she was filming, people were getting killed just a few blocks away at Tahrir Square. Youssef and his team continued to respond to the authorities with satire. “Their message was so much louder than anyone who was throwing a punch,” Taksler says.

The filmmaker was at Al Bernameg headquarters for the best of times––like “the American Bassem Youssef” Jon Stewart’s surprise appearance on live Egyptian TV––and the terrifying moments leading up to the show’s ultimate downfall. The end result is a brilliant feature-length film that made its world premiere last week at the Tribeca Film Festival.

Tickling Giants plays more like a gripping political-comedy-drama than a straightforward documentary. Taksler didn’t want the film to be interview-focused. “I was trying to find a different way to tell the story besides just sitting in a chair talking to the camera,” the director tells me.

For Taksler, one of the key challenges she faced was playing to two separate audiences: one already versed in Youssef’s story and the politics of the Middle East, and another that knows next to nothing about the context. She found a solution in Youssef, the film’s charismatic subject, as well as its charming narrator. Having Youssef narrate sections of the film became an easy way to tell the story. It also added humor to the film. “Everything is through his lens” she says.

Jon Stewart and I met outside the theater before the first screening of Tickling Giants . Discussing his lovely animal farm

Taksler was understandably nervous when Youssef saw the film for the first time last week, though she says he ended up loving it. TFF founders Jane Rosenthal and Robert De Niro also saw the film. They shared their excitement with Taksler when she met them at a directors lunch a few days ago.

After Tribeca, Taksler hopes to have distribution in place. At some point people will be able to see the film either at festivals or through a distribution release.

But will it ever screen in Egypt? Taksler certainly hopes to. In fact, there’s no one she’d rather see the movie and “help keep that flame ignited of fighting for free speech and using nonviolent means to be heard.” Whether or not it will be shown in Egypt––to Youssef’s fans as well as his former staff, his co-stars in the movie––remains to be seen. It seems unlikely that the Egyptian government will allow it.

Of course, Taksler’s main focus at the moment is getting the film and Youssef’s story out.

“To figure out a way of addressing abusive power” is what the movie is about, she says. “Whatever your way of expressing yourself is, if you can find a way to have your thoughts creatively come into the world, you can be so much louder than the people who just choose to hit and kill and harm one another.”

In Youssef’s case, it was using satire to fight the powers-that-be during the most precarious of situations. Tickling giants along the way. As the Al Bernameg host puts it: “When you go after a joker, the joke is on you.”