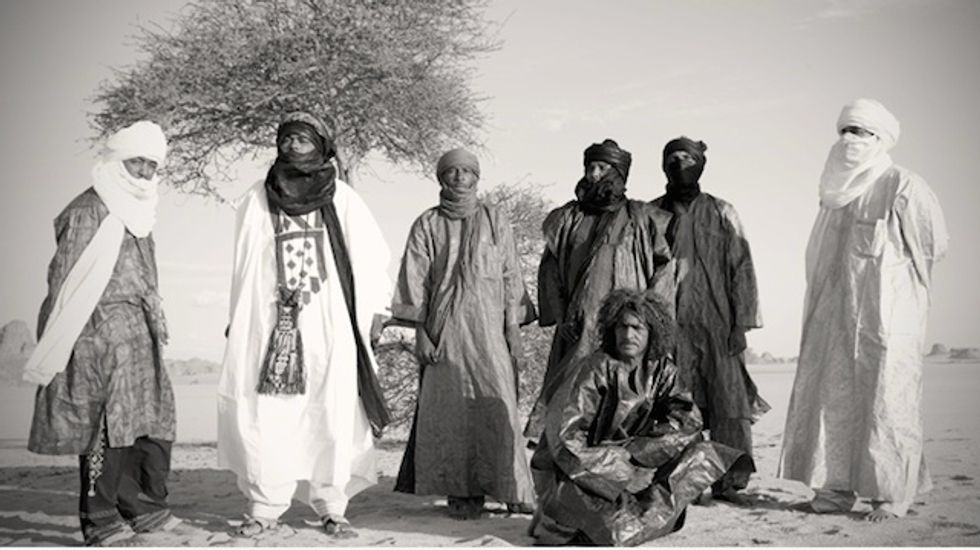 Producer/guitarist Daniel Lanois and indie trio The Antlers each recently remixed a song by Northern Malian desert blues band Tinariwen. In an entertaining video that's part road movie and part science experiment, Lanois adds electronic whirs and stretches to "Adounia Ti Chidjret," an elegantly rustic bonus track on Tinariwen's latest album Emaar. Through grainy, slightly scratched footage, the Brian Eno disciple actually remixes the song on a multi-track control panel as he sits in a 1970s Cadillac, bobbing his head with his friends. Check it out below.

With their remix of Emaar opener "Toumast Tincha," The Antlers don't simply make the track bigger or louder. In fact, they show an intriguing method of emphasis-by-de-emphasis; they muffle Tinariwen's deep voices and multi-mooded guitars but only as a means of bringing attention to those sounds. By accentuating other parts of the song — the drum taps, the sound of water — the band retains the spirit of "Toumast Tincha," honoring Tinariwen in the process. Listen below and catch the three acts tonight at Brooklyn Masonic Temple for ANTI-Thesis, an event curated by Daniel Lanois that will feature full sets by The Antlers, Tinariwen, Lanois himself, and an appearance from artist/educator Lonnie Holley.