Interview: Tiwa Savage Shows Everyone Why She's the Queen of Afrobeats With 'Sugarcane' 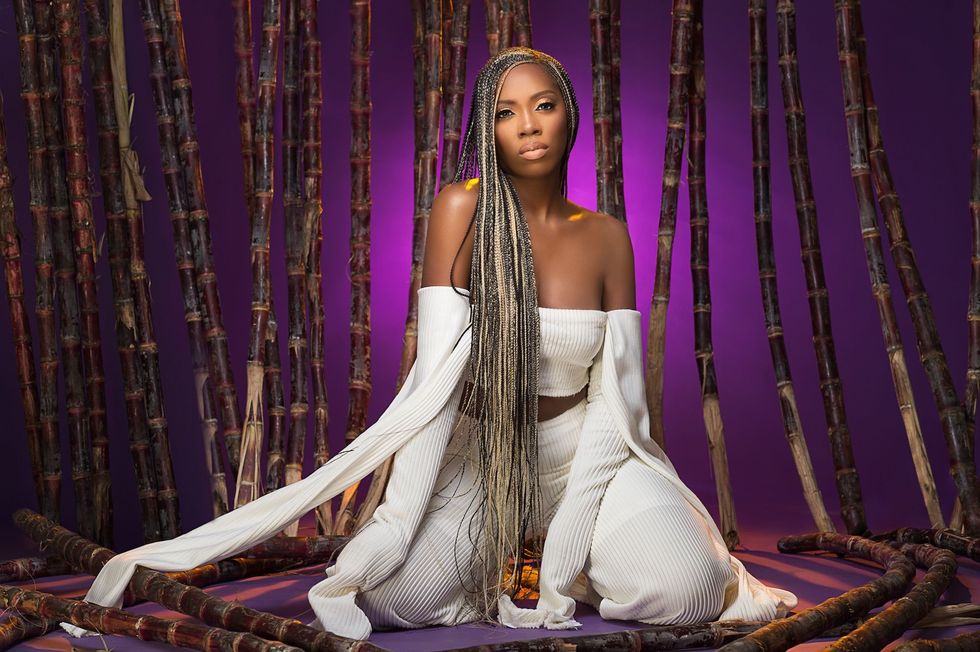 We talk to Nigerian superstar Tiwa Savage about her new EP 'Sugarcane,' having Chris Martin as a fan, motherhood and much more.

Tiwa Savage is the reigning queen of afrobeats.

The EP has since climbed to the #1 spot on the iTunes and Apple Music world chart, and it's been blowing up on social media with fans and fellow artists tirelessly posting videos of themselves dancing to the new tracks. Even Chris Martin loved it.

Sugarcane deserves all the buzz. Its six tracks—which Tiwa wrote alongside producers Babyfresh, Spellz, P2J and Maleek Berry, as well as Wizkid, the EP's only featured artist—are an infectious and impressive continuation of the afropop sound she's been perfecting over the past years.

We caught up with Tiwa over the phone to chat about her new EP, balancing her work and motherhood, and much more.

Why did you call the new EP Sugarcane?

Every single song on the EP sounds very sweet and melodic to me, even those that have a lot of rhythm. It's sweet and very magical, plus the first song is called "Sugarcane," so I went with that name.

What made you want to release it as a surprise?

I wasn't planning on dropping anything actually. I was planning for these songs to be on my album coming out next year. But I was in a really good space in the studio and I don't like sitting on songs for too long—you don't know what the wave will be next year and I don't know what kind of story I'll want to tell next year. So, I kind of didn't want to waste these 6 songs. I also had all these people I'd played the songs to constantly asking me when I was putting them out. [laughs]

How do you feel about being called the Queen of Afrobeats?

I think of Queen of Afrobeats as a compliment, I don't let it get to my head. It's not a title that I bestowed on my head and I don't take it lightly. A lot of people expect a lot from me and I thank God that, so far, my career has been growing. I'm just thankful and it just means that I should continue.

Wizkid is the only featured artists on the EP (on "Ma Lo"). Tell us about that track and working with him.

"Ma Lo" means "don't go" in Yoruba, it was a record that we did while Wizkid was in Nigeria. We were just vibing in the studio. It was a record that he and I instilled a kind of vibe into. When I decided to put out the EP, I figured "All Over" was already out, so I reached out to Wizkid and his camp to see if they wanted to release "Ma Lo." They thought it was special. You know, Wiz and I have history, last year we did "Bad" together.

While y'all are loving #SugarCane ... this ish just happened Chris Martin's fav song of the EP is Ma Lo @coldplay #Coldplay #ThisAfricanGirlConqueringTheWorld #SugarCane #WizzyStarBoyWhereYouAt #spellzjammin The EP out on all digital platforms

I saw a video of Coldplay's Chris Martin dancing to it and then shouting out your EP, how did that happen?

I was just in the studio and I believe the EP had just dropped or was about to drop, so we were having a conversation. I was like, "I'm about to drop the EP," and he was kind of enough to ask to hear it. As soon as he heard the "Sugarcane" record he got on his feet and started dancing. He's really into world music, he's so open. He really loved "Ma Lo," the one with Wikzid, he really felt that one.

What made you pick out the producers for the EP—Spellz, Maleek Berry, P2J, and Babyfresh?

I hand't worked with Maleek Berry before and I love his sound, I'm a huge fan of his. Spellz is like family to me, he's a brother to me, he's done records on my past albums. P2J produced "Bad" and "Love Me Hard" before. Babyfresh, everyone knows I work really well with him so that's why I picked him. Even though I pick producers out, I didn't specifically set out to pick them for this EP. We were just vibing, it seemed like magic.

You've been really busy this year, how do you balance your work and being a single mother?

I think as females, we're built a lot stronger than we give ourselves credit for. I have a great support system, I'm not gonna take credit for all of it. My family, they help a lot specially when I have to travel. I can't travel with my son cause he's at school. I'm blessed to have so many people that help me out and my label is really understanding.

Do you think African female musicians need to work harder than their male counterparts for the same recognition?

Me being a mother, a male artist who's a father doesn't have to travel with their kids. As a female it's a lot more tasking for me, as a mother but again like I said, that just life. I don't like to complain about it, I just get it done. If it means me working ten times harder than other artists, if it takes that, I'll get it done.

Kelechi Amadi Obi. He's incredible and works in the industry across Nigeria. He's awesome and did my first album cover also. I'm kind of a creature of habit, I like to go back to the same people and work with people I vibe with, the feeling I get from them. Kelechi is one of those people I love, he's super talented, we vibe, and he doesn't over do it. I sat down with him and told him I wanted purple-pink colors and the sugarcane aspect of it and he did the rest.

I was blessed to have the legendary @kelechiamadiobi shoot the cover of my EP God bless Nigeria, the talent and gifts we have is special Thank you Bros K for always making me feel beautiful #SugarCane out on all digital platforms

You've done a lot of international collaborations this year—with Diamond Platnumz, Emtee, Awilo Longomba, and many others. Are you trying to connect with artists outside of Nigeria?

If it happens again, it happens. It's not something we're actively pursuing, but sometimes you have a song and you might have an artist that just fits. I'm not gonna not work with an artist if he's not well known. Doing collaborations is always exciting to me and it gives me the opportunity to come out of my comfort zone and maybe spit a verse like with Emtee, or Young Paris and Awilo, it's so exciting for me to do these albums.

I think, with music, we go through a lot of phases. It's just not peculiar to Nigerian afrobeats. Now in America we have trap music. You go through stages when one sound is dominant. In Nigeria before afrobeats before galala, we had highlife.

I love it I love the Pon Pon sound and that people are incorporating it. I don't know how long it's gonna last, but as an artist I like to adapt and maybe add new sounds in.

Any plans for music videos from the EP?