Today's Election In Congo-Brazzaville Will Be Neither Free Nor Fair 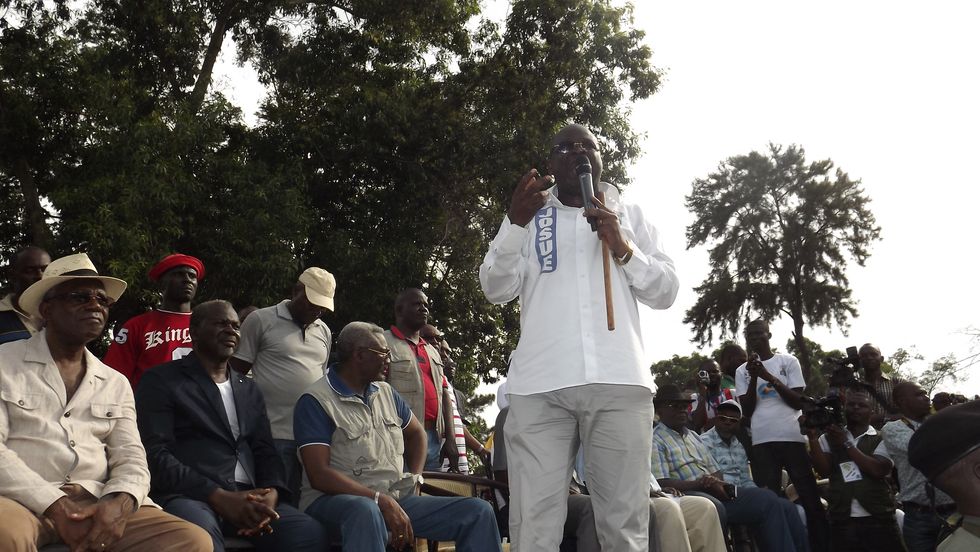 Longtime President Denis Sassou Nguesso is expected to win the poll amidst a nation-wide communications and motor-vehicle ban.

Photo of the Congolese journalist Roch Bouka. Courtesy of Bouka.

Congo Republic goes to the polls today amid a communications blackout. The almost inevitable winner will be longtime Congolese President Denis Sassou Nguesso. Sassou Nguesso first ruled the Central African country after seizing power in a 1979 coup and until 1992. He returned to power in 1997 after a brief civil war and has since won two elections.

The 71 year-old is running for a new term after voters in October approved revisions to term and age limits in the constitution that would have barred him from running again. More than 92 percent of voters in Congo-Brazzaville's referendum approved the changes despite controversy over the legitimacy of the process.

"Basically the government controls the electoral process very strongly,” Congolese journalist Roch Bouka told Okayafrica. “The 20 March election will be neither free nor fair because the 'independent' electoral commission is filled with long-time Sassou Nguesso allies”

After the October referendum, opposition groups mobilized in large numbers, staging demonstrations in Brazzaville, the capital, and Pointe Noire, the second biggest city, arguing that turnout was low and the vote should be annulled. The result was at least four deaths, as police opened fire on protesters—some of the worst violence seen on Congolese streets since the end of the civil war in 1997.

One of Congo’s leading opposition politicians Guy Brice Parfait Kolelas, the son of Bernard Kolelas the former opposition leader, has been under house arrest with about 30 of his supporters.

Western governments are torn between endorsing veteran leaders or pressing for term limits. Congo is a former French colony and President Francois Hollande said in October 2015 that Sassou Nguesso had the right to consult his people so that he may run for the 3rd term.

“The Congolese people were astonished by the French position” says Bouka.

According to Bouka, at the 2014 France-Afrique Summit held in Dakar “it was the French president himself who denounced the long-serving leaders who fiddle with their countries’ constitutions in order to hold on to power.”

This was taken as a declaration that France would support democracy in its former colonies.

“Learning that the same Francois Holland changed his position,” says Bouka “was a nightmare for Congolese people who believed in his speech less than two years ago”

For their part, the United States and the European Union strongly condemned Sassou Nguesso’s attempts to change the constitution maintain the power. According to the opposition politician under house arrest, Parfait Kolelas from the Congolese Movement for Democracy and Integral Development, the American and European Union ambassadors were pushing for a dialogue between his party and Sassou Nguesso’s. It didn’t happen and the new constitution was formally promulgated by President Sassou Nguesso on 6 November 2015.

“For now the Congolese people are divided, the majority of the population are tired of him, 32 years on power are too much” says Bouka.

In today’s race there are nine candidates including one woman. Five of these candidates on the opposition side are popular and have support among the youth from different parts of the country. According to Bouka, “it won’t be easy for him to win on the first round, this time his opponents are more determined than ever.”

The European Union says it will not send observers for today’s election citing doubts the process will be truly democratic and the insufficient organizational institutions to guarantee transparency and inclusiveness.

A local businessman reached in Brazzaville told Okayafrica under condition of anonymity that “Sassou Nguesso has the power in his hands but this time it’s not clear how he will manage to convince his population that he can win the election on the first round. The French government support made him feel like he has no pressure from western countries, but during his reign he didn’t manage to unite his population, the country is divided into the blocs of north and south”.

Oil and Natural Gas dominates the resource sector of the Republic of the Congo, with the petroleum industry accounting for 89 percent of the country’s exports. Among African crude oil producers in 2010, The Congo ranked seventh. Oil production comes almost entirely from offshore oil fields. Congo exports almost all of its oil production, and the largest recipients are China and the European Union.

Half of Congo’s people live below the poverty line. Most of the country’s poor people (64.8 per cent) live in rural areas and women are among the hardest hit by poverty. In 2006, more than a third of children under five in rural areas suffered from malnutrition.

The concentration of economic activities and investment in Brazzaville and Pointe-Noire has led to significant geographic imbalances, in particular between urban and rural areas. The incidence of poverty is 74.8 percent in rural areas, compared with 32.3 percent in urban areas, according to the 2011 Congolese household survey.

According to Freedom House “Indigenous groups are often concentrated in isolated rural areas, are not registered to vote, and are actively discriminated against, leaving them politically marginalized.”

According to human rights organizations, since reclaiming power in 1997, Sassou Nguesso has quietly accumulated one of the continent's worst human rights records.

The five "radical opposition" candidates claim membership in IDC-FROCAD, an umbrella alliance that organized the referendum boycott and have created their own electoral commission to monitor the official body, which they say answers to the president.