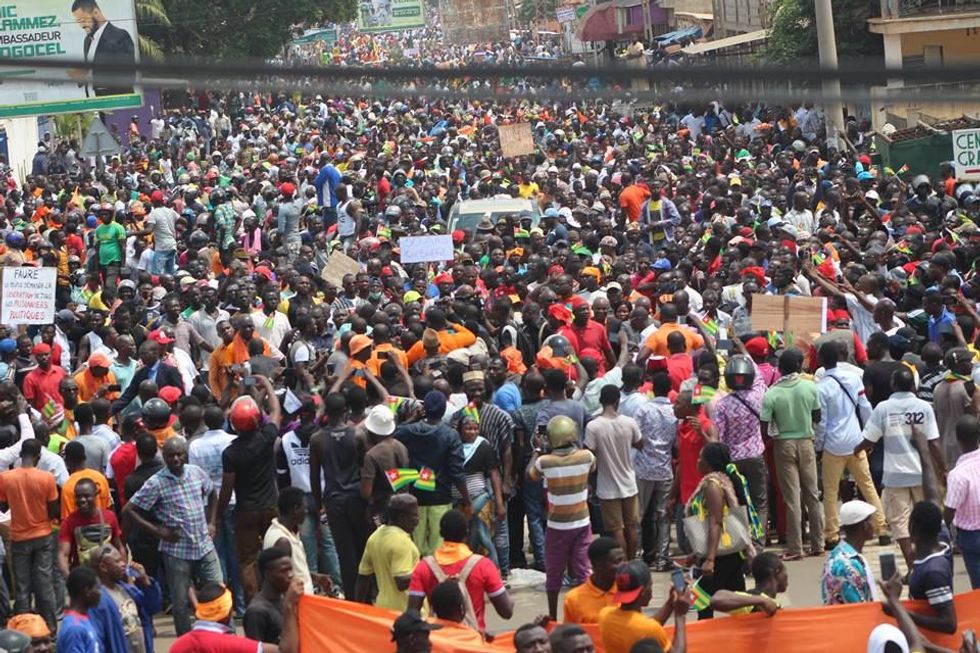 Hundreds of thousands of Togolese citizens have taken to the streets to protest the long-standing rule of President Faure Gnassingbe.

Over the last few days, hundreds of thousands have headed to the streets of Togo to protest the rule of President Faure Gnassingbe.

Gnassignbe's family has been in leadership for 50 years. Togolese opposition leaders are moving for his immediate removal. Gnassingbe has offered his own amendment in response, which would limit presidential terms to a maximum of two, however, his draft has been rejected as  most believe that it would apply retroactively, allowing Gnassingbe to remain in office till 2030.

Thousands of Togolese have expressed extreme discontent with his leadership and are demanding legitimate constitutional reform.

"The president's position is very fragile, and we do not think his peers in ECOWAS or his friends in Europe will help him if things get ugly," Francois Conradie, head of research at NKC African Economics, told Al Jazeera.

In what appears to be an attempt by the government to silence critics, the internet and SMS texting have been blocked.

Togolese activist, Farida Nabourema has shared videos and images from the protests via her Twitter page. "The millions of Togolese that took the streets to say enough of 50 years of the Gnassingbe dictatorship are just tired of the abuse in #Togo," she wrote. View the footage below.

Leave the seat. The seat is not yours." #Togo youths chant as they are rallying to the protest ground #TogoDeboutpic.twitter.com/akYgRMdqiT

Revolution loading in #TOGO. We are tired of the 50 years old regime of the Gnassingbe. #Togodebout#Togoviwofon@SaharaReporterspic.twitter.com/IbWXE8nTp5

Despite the threats of the minister of security, hundreds of thousand of people are in the street in #Togo to demand term limits. #Africapic.twitter.com/hXmqNbU1wR