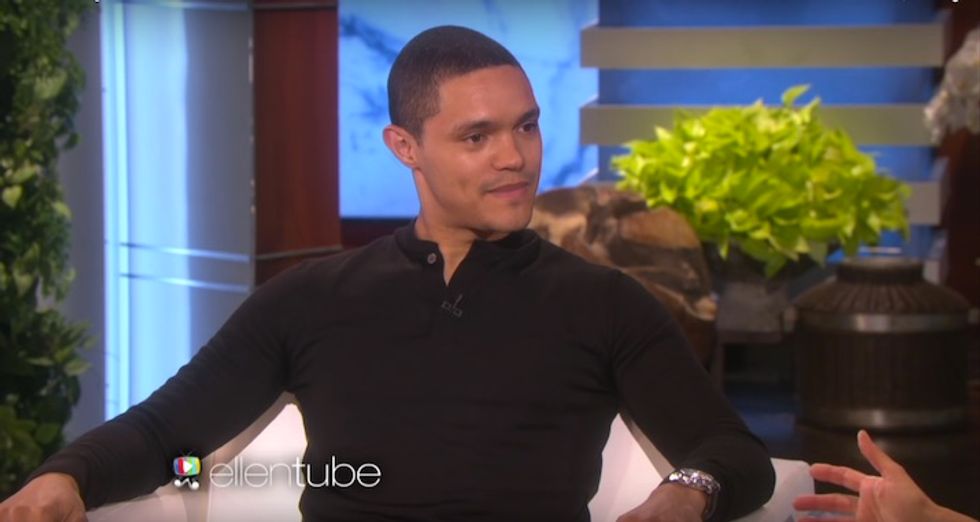 One month into his new gig as host of The Daily Show, Trevor Noah stopped by The Ellen DeGeneres Show to talk his childhood in South Africa.

Exactly one month into his new gig as host of The Daily Show, Trevor Noah stopped by The Ellen DeGeneres Show to talk his childhood in South Africa.

Ellen, who says she visited South Africa for the first time last summer, asked Noah to tell his “amazing” story growing up. “It’s weird, because when people say that, I think I grew up normally,” the 31-year-old comedian said. “And then I go home to visit my grandmother and I remember that we had an outdoor toilet, and I’m like, ‘oh yeah, seemed like a lot more fun when I was a kid.'”

When asked about growing up during apartheid as the child of a black South African mother and a white Swiss father, Noah brushed off the notion that this was a “really tough time” for him. “I always say, I grew up in a great time,” he told Ellen. “Because I appreciate what happened, I appreciate how democracy changed our lives. But I wasn’t in apartheid for so long that I can say it truly affected me negatively. I think my parents had a tougher time. My mom was arrested for being with my dad on many occasions. So she got it the worst. I was having a great time.”