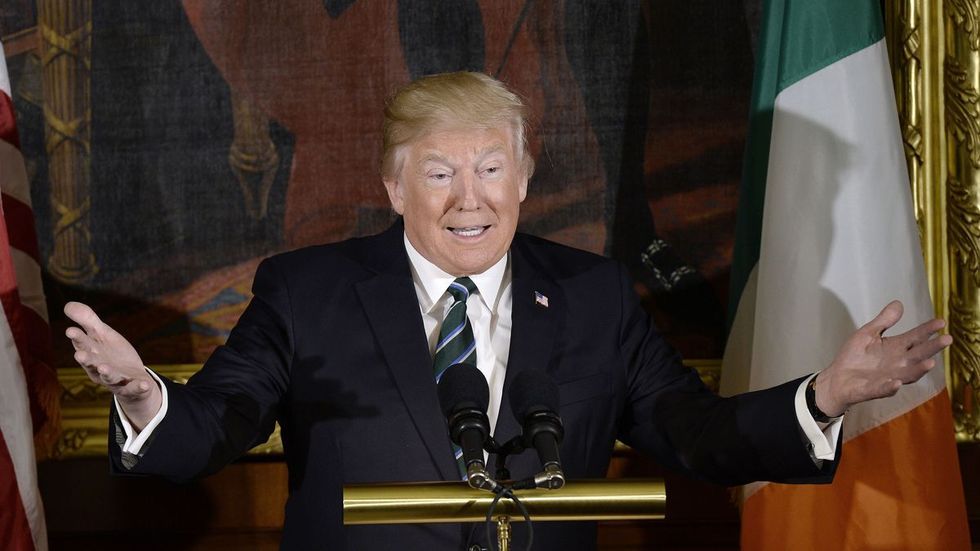 Trump shares his "favorite Irish proverb" during his St.Patrick's Day address, but it's actually a poem written by Nigerian writer, Albashir Adam Alhassan.

He began his speech by addressing the importance of America's relationship with the Irish. "As we stand together with our Irish friends, I’m reminded of an Irish proverb – and this is a good one, this is one I like, I’ve heard it for many, many years and I love it," said Trump.

He proceeded to share the following quote: "always remember to forget the friends that proved untrue, but never forget to remember those that have stuck by you."

Trump reads one of his favorite Irish proverbs pic.twitter.com/KgE5ipvepw

It turns out that this "Irish proverb" that Turmp claims to love so very much is actually a poem credited to Nigerian writer and banker, Albashir Adam Alhassan, born in Kano State, with no known ties to Ireland.  Read the alternative Irish poem below.

A White House spokesperson told The Hill that the poem was “originally supplied in an email on March 8 by the State Department via the National Security Council, as building blocks in advance of this event. These building blocks were supplied in the context of the Shamrock Ceremony and were ultimately used in the prepared remarks for the luncheon."

All of this is just too good for folks to not make fun of. I mean, where do we even begin?

Trump's favorite Irish proverb that he struggled to read aloud was written by Albashir Adam Alhassan, a Nigerian. https://t.co/sk8yIcRgiD

Trump's Irish poet, Albashir Adam Alhassan, is Nigerian. Also, a proverb is not a poem. #ArtFunding#IrishProverb#IrishLiterature

Shoutout to the staffer who gave Trump the 'Irish proverb' to read that was actually a poem written by a Nigerian Muslim. #NextLevelTrollingpic.twitter.com/ZAmBZW8Wlo

Though an opportunity to roast Trump should never be missed, there has been some speculation as to whether or not the poem is actually written by Alhassan, as it appears on a number of websites as an Irish proverb. The Guardian is reporting that the quote first appeared in a journal back in 1936. There's been no confirmation from Alhassan as of yet, but either way, we're not letting Trump live this one down that easily.