Tunji Ige Is Taking Over The Rap Game 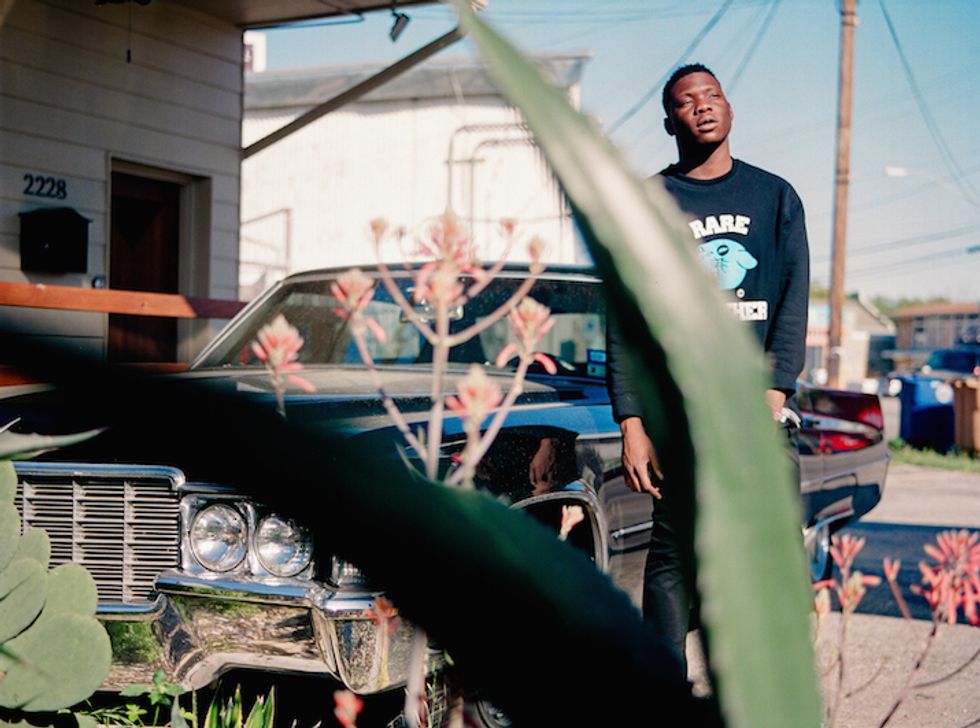 Nigerian-Philadephian rapper & producer Tunji Ige is releasing some of the most exciting hip-hop to come out in the past few years.

Tunji Ige is on a rapid rise. In the past year, the 20-year-old Philadelphia-based rapper and producer has released a mixtape and album that have the industry buzzing. Tunji’s hype is justified. His compositions are easily some of the most exciting hip-hop tracks to come out in the past few years.

Born in Pennsylvania to Nigerian parents, Tunji (Olatunji) grew up constantly surrounded by the sounds of Fela Kuti and afrobeat, he tells us over the phone. As a teenager, he started writing, recording, and producing what would become The Love Project in his college dorm room—a mixtape that he uploaded on Soundcloud and gave away for free.

Propelled by earworm singles like “Day2Day” featuring ILoveMakonnen, as well as “Ball Is Life” and “For Us,”The Love Project grew legs on its own, gaining widespread attention from music journals and racking up hundreds of thousands of plays.

Tunji has now released his new album Missed Calls, led by the booming “On My Grind.” The new project sees him collaborating with producer Noah Breakfast on seven songs that expand on his ever-morphing style, which encompasses everything from mainstream rap anthems to live instrumentation, dancehall samples and electronic beats. As Tunji raps on album cut "Fired Up," "It's the post back pack, the post swag rap, the end of trap."

We spoke with Tunji Ige about his favorite Fela records, collaborating with Nigerian pop stars and the influences on Missed Calls.

What do you like about Fela and afrobeat? How has it influenced your songs?

Tunji Ige: Fela Kuti is a huge influence. I grew up listening to him everyday because my dad would play it all the time. He’d play all of his different albums. Someone from my family drew some of the covers for Fela, I’m not sure, it might be Confusion or Yellow Fever. We’ve been to The Shrine as well, it’s a dear part of my musical influence.

I like how Fela orchestrated songs, like he’d have singing for three minutes on a song then a seven minute instrumental, then back to the lyrics. Plus, he was crazy onstage.

As far as my sound goes, Fela influenced things like the saxophones in The Love Project and the percussion on new tracks like “22.”

Are there other Nigerian or African artists that you’re currently plugged in to?

A lot of the Koola Lobitos stuff and 70s psychedelic African bands. A lot of early, early Fela. I wanna sample a lot of that stuff and make some crazy shit. I’m a huge Sunny Adé fan and definitely into some Seun and Femi Kuti. There’s so much African stuff, it’s half of what I listen to.

As far as current acts, I was just in the studio with Ice Prince. He’s just good peoples, I actually have to send him a recording right after this call. I got some stuff for him going on. I’m talking to Wizkid’s people. There’s definitely lots of Nigerian artists I wanna get with.

I have a record coming called “Pounds” that's for Africa. It's an anthem, you'll see. I wanna establish my style first, though, before really seeing what could come to life from that side of things.

Tell me about your Nigerian background. How did it play into your youth and when you started making music?

Just being surrounded by Nigerian music constantly. You know Nigerian music—it’s afrobeats, it’s lively, it’s very celebration-oriented. For the most part a lot of the songs are feel good songs, so I take that from them.

Missed Calls is a good vibes album. It’s 'feeling yourself' music that feels like part of my culture that I wanna celebrate.

Have you been to Nigeria?

I’ve been there like three times. I always go to the market or to the malls with my cousins. It’s very beautiful out there, the quality of life there is crazy good. I’m trying to go back for a trip soon, eventually to play shows, but not right now.

In many ways The Love Project was a coming of age release. Is Missed Calls a progression from that?

It’s a progression honing in that coming of age. It’s about self-acceptance. "A super star is what you’ve become," is the Vybz Kartel sample that ends the record (in "22"). It’s the full transformation and the foundation for the rest of my career.