#UgandaDecides: Everything You Need To Know About Yesterday's Ugandan Election 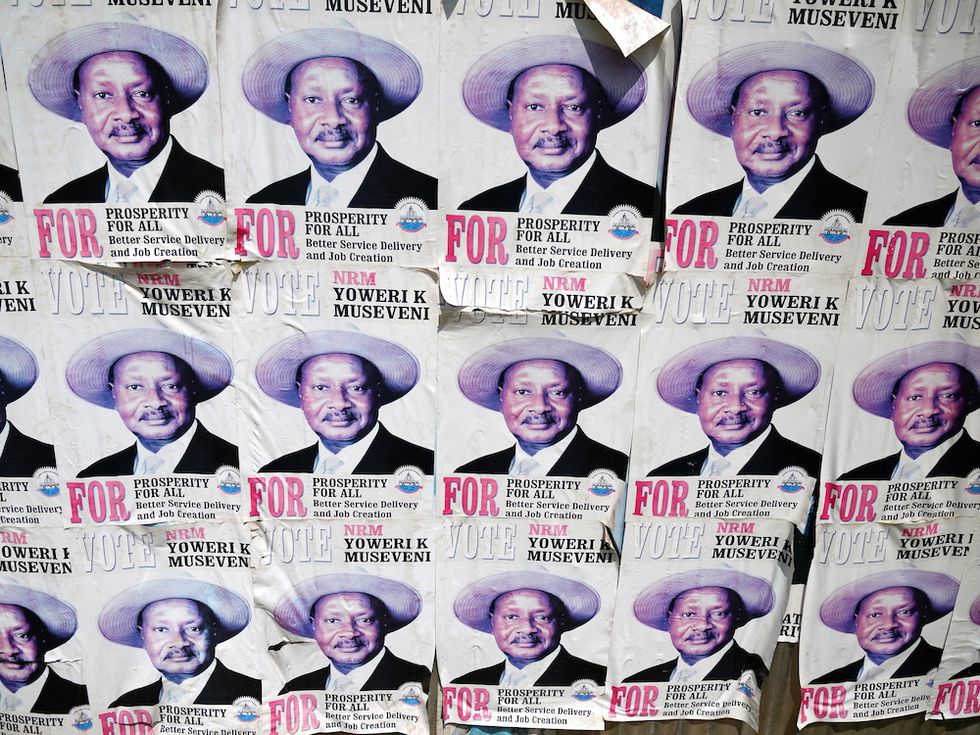 Yesterday’s election exposed Africa’s leading coffee producer as a nation led by a regime with little respect for fundamental human rights, including freedom of association.

The Twitter hashtag #MuseveniDecides, is telling of how low people’s expectations are for real political change in Uganda. Even the president’s main opposition, Dr. Kizza Besigye of the Forum for Democratic Change (FDC) party, admitted in a 2013 interview that participating in this year’s election would be “a ritual without any political significance.“ He was right.

Poll results so far show Museveni is in the lead, and on the path to becoming Uganda’s next president for five more years, which would make it his fifth term in office. Museveni is one of Africa’s longest serving presidents–35 years in 2021 if he is successful (hint: he will be). The septuagenarian follows Zimbabwe’s President Robert Mugabe, Angola’s President José Eduardo dos Santos and Equatorial Guinea’s Teodoro Obiang Nguema Mbasogo with 30 plus years of experience in the same job.

Seven presidential candidates vied for the prized seat, one of whom is a U.K.-educated lawyer and the daughter of a former politician: Maureen Kyalya Waluube. She is also the only woman in the presidential race.

Museveni’s main opposition Dr. Kizza Besigye faced arrest three times this week, and was not spared on election day. News reports reveal that yesterday’s detainment was done to stop the opposition leader from announcing his own presidential results. There is still no explanation for the first two arrests. The politician is used to being locked up, notably for trying to organize public rallies that are not in line with the government guidelines. Besigye has lost three times in previous elections, and changed his mind about sitting out the 2016 election.

The call for change is undeniable, but every few years the world is reminded that it will be slow. In 2005, a parliamentary vote lifting the presidential term limit and the re-introduction of multi-party politics after 20 years, led to outrage across the world. History has shown that Western powers typically come out with threats of aid cuts, and in turn, accusations of “social imperialism” fly but Uganda will show signs of improved governance over time, at which point money will start trickling in again.

Museveni's popular song, "Do You Want Another Rap?" may have been a hit in 2010, but Sevo's vibrant personality and justification for staying in power is just not as appealing in 2016 despite his gains. In 30 years, Museveni’s government has curbed insecurity, and the rate of new HIV infections, as well as improved infrastructure. The country’s best economic climate was between the 1990s and 2000s, when Uganda’s real GDP averaged seven percent, according to the World Bank. However, the last ten years has seen a drop to five percent.

The president’s claim that “all Uganda’s problems have been solved by National Resistance Movement (NRM) and led by me… What have the others done for you?” are a little far-fetched. The issues of human rights violations, especially between LGBTI people and political opponents, are pretty hard to ignore and deeply problematic.

It’s time to start feeding the Ugandan people a healthy dose of transparency, good governance with a side dish of job creation. Unemployment remains a big issue in Uganda with at least 62 percent of young people without jobs, according to Action Aid although some research puts the figure at 83 percent.

A significant change during this election was the decision to block Facebook, Twitter and Whatsapp early yesterday morning, as a precautionary measure. According to President Museveni, doing so would “stop so many [social media users] from getting in trouble; it is temporary because some people use those pathways for telling lies.” To Museveni’s credit, his Twitter account remained inactive on February 18, so at least he is not a hypocrite in this regard.

For a country that is known for its heavy armed presence, including that of the somewhat vigilante community crime preventers, who are notorious for extortion and harassment, it is hard to believe that a regime that has stayed intact for 30 years would feel threatened by social media users who know better than to associate freely and plan a revolt in Uganda.

Reports of arbitrary arrest and clashes with police during the lead-up to the election are well documented. From radio journalist Jakican’s arrest in the middle of his show along with seven politicians who were discussing the presidential debate during the broadcast. Reports of intimidation and harassment surfaced repeatedly.

Frustrated voters waited in lines for hours, after it became apparent that the 7:00 am call time for voting would not happen. In a show of explicit defiance, on social media no less, former Prime Minister and The Democratic Alliance (TDA) 2016 presidential candidate Amama Mbabazi, took to Twitter to inform Ugandans of a loophole in accessing blocked sites: virtual private network (VPNs).

Political change, under a new President, might not happen in the next few days but here's hoping it develops by the time Museveni’s next rap song drops, and social media is still accessible so Ugandans can document it.