Ugandans Are Tweeting #1986Pictures As A Memo To President Of 30 Years, Yoweri Museveni 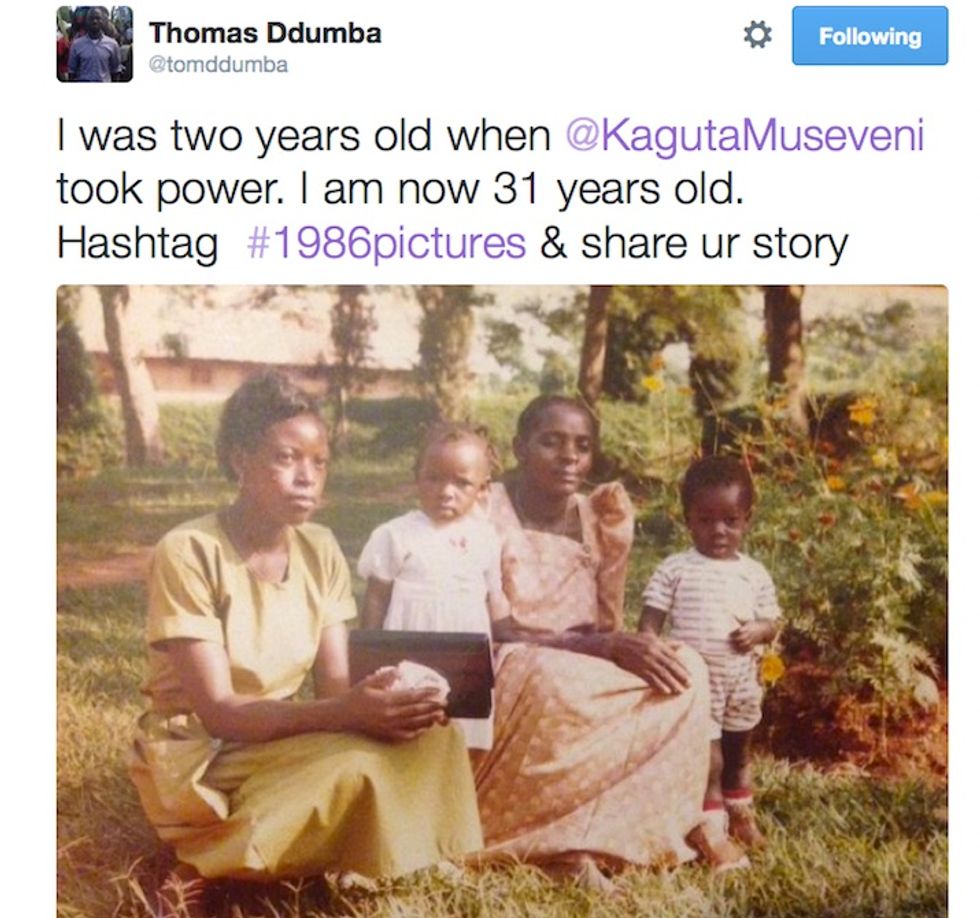 Ugandans on Twitter are sharing #1986Pictures as a memo to the country's president of 30 years, Yoweri Museveni.

Last week, Uganda had its first-ever live presidential debate, but Yoweri Museveni—the country’s president since 1986—declined to participate. While that might have sunk a lesser candidate’s campaign, Museveni is widely expected to extend his three-decade rule by another five years. Reports of harassment against the opposition and journalists is typical of his campaign style, alongside a rather commanding control of state finances and other institutions.

Over on Twitter, some Ugandans have been noting just how much has changed since 1986–everything, of course, with the exception of the country’s president.

Thomas Ddumba, 31, was just two years old when Museveni came to power. In a tweet on Saturday, Ddumba invited his fellow Ugandans on Twitter to join him in sharing their own #1986Pictures.

“[The] #1986Pictures idea came up during a discussion with a friend,” Ddumba tells Okayafrica in an email:

30 years in power is not a short time. I thought that during this election campaign, it would be good for many Ugandans to express themselves, to think deeply about Museveni’s long stay in power. In 30 years, Lee Kuan Yew had transformed Singapore. In Uganda, we are having a steady decline. It is sickening that we find ourselves in this situation.

Thirty years of Museveni’s rule is not democracy, it is a military dictatorship. This is something that I thought that many of those voting in this forthcoming election need to come to terms with. Most were not around when Museveni came to power. It is time that they too wake up from this tasteless feast of spin and deception so that we have steady progress in democracy and everything else.

I thought it is time that Ugandans look the leopard in the eyes and tell it that we are maddened by his long stay power, and that we cannot have it anymore.

There are many that were born in 1986 that are now married and have kids. An MP from Uganda also confessed that he was 10 years of age when Museveni came into power. He has worked in civil service and as an MP for 10 years now.In Uganda, I have never come across a Ugandan that has been in the same job for 30 years. It is only Museveni that has done this.

As Uganda goes to the polls, I think we need a new form of activism. We need to win on these fronts through engaging people about what is at stake as all this will add up. Without any real physical force, we shall send the message out clearly to the dictatorship.

Ugandan lawyer and human rights activist Bireete Sarah called the hashtag a “hilarious historical journal of where were you when [Museveni] came to power,” she tweeted, “The children then are parents today.”

Some were just babies in 1986. Others were school-age kids. A few weren’t even born yet, but wanted to get in on the action too.

I was one year old when Uganda's current president was sworn in. #1986Picturespic.twitter.com/yllsKjQ7BY

#1986pictures My sister @barnta and I, in Kingston, Ontario, Canada. My parents were in exile :)))) pic.twitter.com/fNF1LgtQmU

I'm now about the size (though younger than) my dad was in this pic. Mum's been resting two years now #1986picturespic.twitter.com/SmdkcBC2m6 — Tim M (@Unsincere) January 17, 2016

#1986pictures#kampala ..this is along stretcher they now store containers in the area pic.twitter.com/p0jjE2FkPz