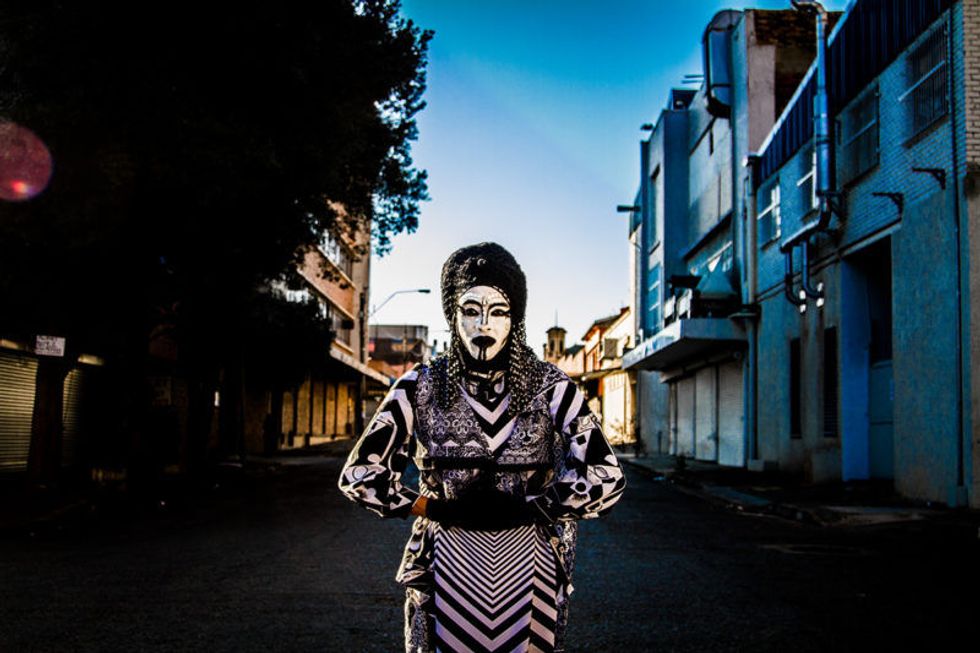 Umlilo's "Umzabalazo" video is a timely meditation on protest and revolution set in the backdrop of South Africa's #FeesMustFall movement.

I don’t want to give too much away about South African kwaai divaUmlilo’s new music video. You should probably just watch it for yourself right now.

A timely meditation on protest and revolution in South Africa set in the backdrop of the #FeesMustFall movement, “Umzabalazo” chronicles the country’s student protests through two characters on opposite ends of the South African youth struggle. Both characters are played by Umlilo.

Firstly, there’s a ‘lost soul’-type from what appears to be a wealthy suburb in Johannesburg. A press release refers to him as an “everyday slacktivist.” He’s disengaged from the struggle, opting instead to watch the protests from his computer.

The second character is a more revolutionary alter ego of the first character, a performance artist speaking of revolution throughout Johannesburg.

“We wanted to create a unique South Africa story that reflects the existential crisis and bewilderment many South Africans feel as a result of these oppressive structures that continue to dominate our everyday lived experiences and our collective future,” says Umlilo.

The video’s director, Odendaal Esterhuyse, was away in India at the onset of the #FeesMustFall movement last October. “It added a lot to the concept of this video,” explains Esterhuyse. “I felt this weird tension because I wanted to be a part of it but I couldn’t. In retrospect, I don’t know if I would have been a part of it even if I was in SA… maybe that was just a fantasy. That’s where the idea of the two characters in Umzabalazo originated… the one is the reality, the other is a digital projection of the fantasy.”

The actual video shoot was livestreamed on Periscope as Umlilo performed at a number of historical sites of struggle around Johannesburg. A 360 image was taken at each location and added as permanent spot on Google maps. You can check out a story map from the shoot via Umlilo’s website.

“Umzabalazo” is the fourth single off Umlilo’s Aluta EP. The video that’s out today is the first of two parts. An interactive second part is due to launch during Umlilo’s TEdxWomen performance on October 29.