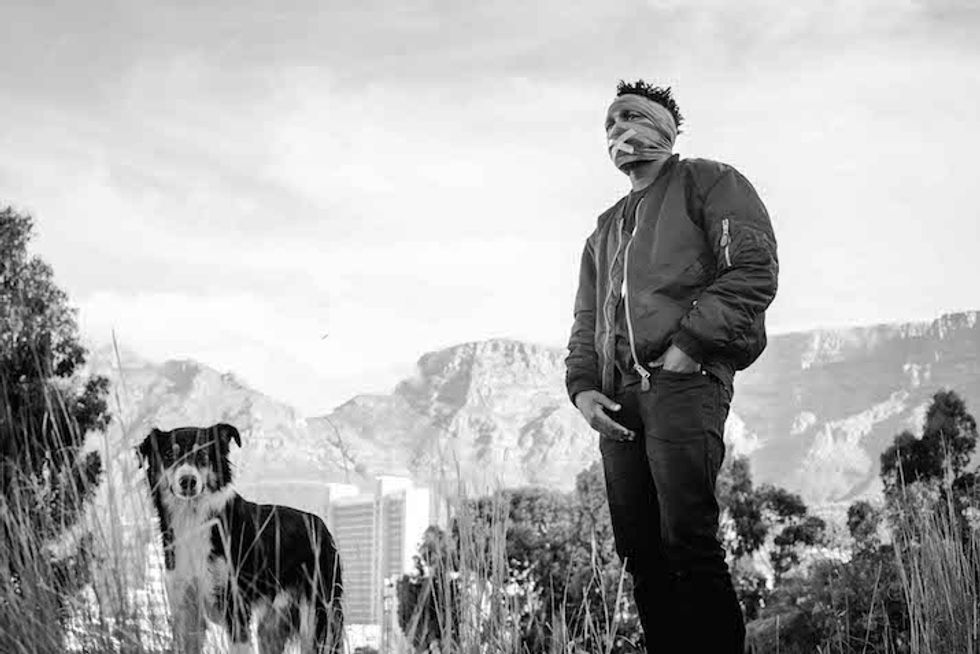 Uno July has served as one-half of golden era revivalist hip-hop duo Ill Skillz (alongside Jimmy Flexx) for over ten years. This year, the Cape Town-based rapper is stepping out on his own to release the 7-track Best Kept Secret EP, a project that sees July approaching the boom-bap retro sounds of Ill Skillz through what he categorizes as an avant-garde, left field approach.

"For as long as I've been part... of Cape Town's music scene, my lead has always been taken from the way paved by the likes of POC, Groundworx and 5th Floor, who pioneered our local hip-hop movement nationwide" Uno July writes Okayafrica via e-mail. "When I look back, I see how far we have come as a culture and how we consequently blended our cultures and united races through the pure spirit of music... It's exciting to see the evolution taking place which as a result birthed a culture clash which is favourably indie-orientated and allows artists such as myself to excel through it by experimenting [with] art the way I personally envision it."

On top of his Best Kept Secret EP, which includes features from past Ill Skillz collaborator J-oNE and vocalist Stan1, Uno July will be dropping the full-length Uno n Only project later this year. Below, we spoke with the South African MC to dig into the production and influences on his new sound. Read our interview with Uno July and stream his Best Kept Secret EP below.

Okayafrica: How would you describe your solo sound in comparison to Ill Skillz' sound at the moment?

Uno July: Ill Skillz has a reputation for being a traditional rap outfit mainly influenced by golden era rap. Personally I took an avant-garde approach for this project drifting towards left field from the centre. Primarily my aim was to respect the art, culture and legacy of Ill Skillz by experimenting and blending retro sounds and ideas along with new age textures. You'll also come across that the EP displays my versatility and my range musical-wise.

OKA: Where did you record the EP?

UJ: I recorded the entire project in Cape Town between Red Bull Studios, SAE Institute and a bulk of them at the Bassmint Studios, engineering duties all handled by Itumeleng Matlala. I also feel the need to explain that I was in the process of recording two projects, whereby I ended up with 24 tracks as a result by the time the Best Kept Secret EP dropped. The follow up project is due on  July 1 [and it's] still currently in progress.

OKA: Who produced Best Kept Secret? What inspired the production on the EP?

UJ: J-oNE once again, who's been instrumental since we started working together on the Ill Skillz Notes From The Native Yards album, came on board. Then also a producer from Zurich, Switzerland by the name of Maloon representing Boyoom Connective.

Like I also mentioned I was aiming to display my musical range but being also minimal at the same time. I worked with a vocalist named Stan1 as well... we incorporated a lot of vocals on my songs, hoping to create music that will transcend. One must also understand that I really came from a dark place due to my personal experiences from the past three years, where most of it is shown on the NFTNY album, but now I'm recovering and I intentionally created music that I would enjoy while making and finding a rhythm and feel of enjoyment. Therefore you'll discover a contrast that all the production is groove-driven... yet the effect of the music is nuanced by dark moments of my life.

I could be also over-sharing a little but, [to] describe my ritual and habits of my recording process, I usually buy packs of Speckled Egg Sweets... because of [their] taste, effect and colour schemes [they] allude to my personal development of synthesia, whereby I perceive my music in shapes and colours patterns.

UJ: It's all in the music, my weapon. By the time the official tape is out you'll discover it between the lines.

OKA: Who's the best kept secret in Cape Town hip-hop?

UJ: I am. That was the ultimate point of the album title.

Look out for Uno July's upcoming 'Uno n Only' full-length, due July 1. For more, revisit Ill Skillz' Cape Town In Your Earbuds mixtape.