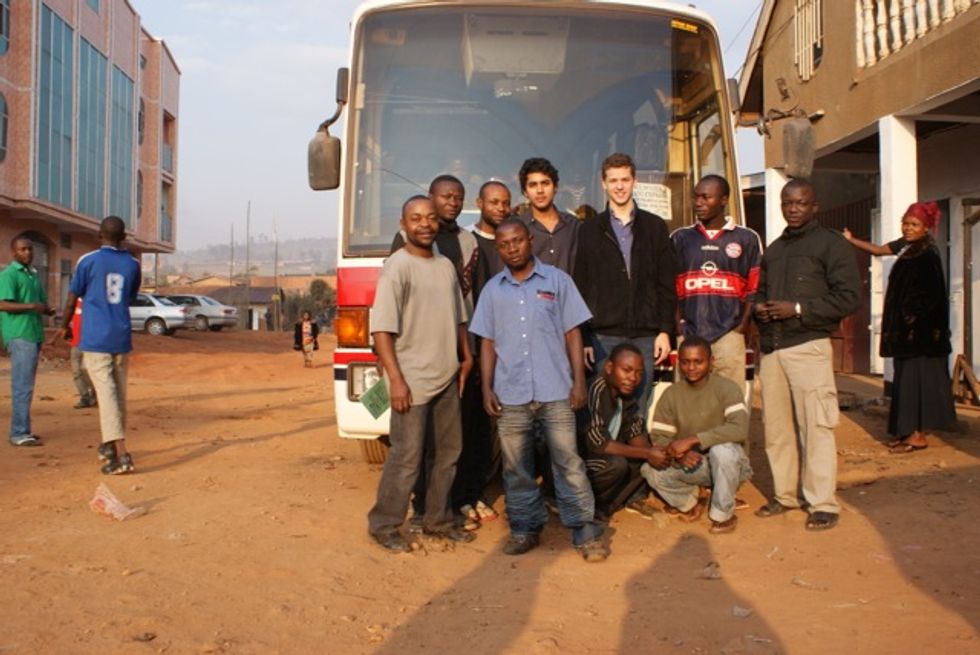 The Okayplayer fam discusses the recent VICE Africa travel section featuring an interview with a couple of thrill-seekers who set up a DRC bus company.

VICE's travel section recently featured an interview with a couple of thrill-seekers who set up their own bus company in the Democratic Republic of Congo, AKA "the 6th most corrupt country in Africa." We generally take pleasure in ignoring VICE's "Africa" coverage, particularly their war-porn docu-series "VICE's Guide to Congo." But with a hurricane on our doorstep, I thought I'd send around this little gem to our respective bunkers to make sure the team is still alive and biting. See our comments on this tired-ass "Africa makes men out of boys" narrative below and read the full interview here.

B: Summed up in the first question:

VICE: What prompted you to set up your own company in the Democratic Republic of Congo?

A: Vice finds their ignorance "impressive." To me, that's impressive.

Side note: My dumbass once dated a dude who shot a tv show about driving through Africa. I can't tell you how many times I heard him tell the story of being stopped in DRC by "rebels" and getting a gun shoved in his mouth until he and his crew produced enough goods and money to be let off the hook. He told the story with such a fiendish glee for war and violence - now that's some savage sh*t. Same thing here. Lines are blurred - who's more savage? Warmongers, war-chasers, or war-porn purveyors?

B: Do we really need to assign levels of "savageness" though? it's all despicable, to me at least.

D: These men picked themselves up from…wherever they were… to go become the intrepid entrepreneurs they were no doubt bred to be, and are now using their moment in the spotlight to whinge. They are treated with strange respect and admiration because of their ‘skin color’, business ‘suffers from corruption’, and nasty Africans shove guns in their faces. Poor bazungu! Seriously. If DRC is anything like Liberia (it is, isn't it?? that's what the pic of four dead children is about, no?) they should shut up and be grateful they haven’t been eaten.

M: Ditto everything said. According to them...only "reverse racism" and being "taken advantage of" for being white can get you your own successful start up company in Africa.

Scene: 2 dudes sitting at a loft in williamsburg having a conversation

G: These kids have no sense of their own privilege if they are making remarks like "we wanted to settle in a hostile environment and live an extraordinary adventure." Imagine how people who actually grew up and live there, who's families go generations back, who call it home, must feel to hear how 3 entitled kids "wanted to settle in a hostile environment." I'm sure they want nothing more than to NOT have their environment be hostile. The way this article is framed, it's as if these kids think this place exists in all it's "hostility" to provide a dangerous and exciting adventure just for them - much how the colonialists must have felt on their "great adventures." At least they didn't show up with bibles (or did they?).

V: I'm interested in why they felt it was important to mention that the genitals were cut off from the dead bodies on the road. If they were looking at wounded American soldiers, how would they have described their injuries? My guess is in broader terms - "his head was blown off…he was shot and bloody" etc etc. The genitals detail feels like war porn to me. It sets in motion both a natural disgust but also a fascination with violence and death. That's something we'd find much harder to stomach if they were describing the deaths of our own soldiers. We might even find it unspeakable to talk about dead soldiers that way. A kind of code.

Mentioning this detail – the ability to say it casually as part of a story – is part of the dehumanization of "the other" that's implicit in these kinds of stories and relationships.

Listen, tho, I'm not completely blaming them. Dehumanization is like racism in that it's systemic and taught to us at a very young age as a way to be able to subjugate others.

A: These dudes are the reason I got into this business.