This Somali Farmer Wants To Harvest Her Culture in America's Midwest 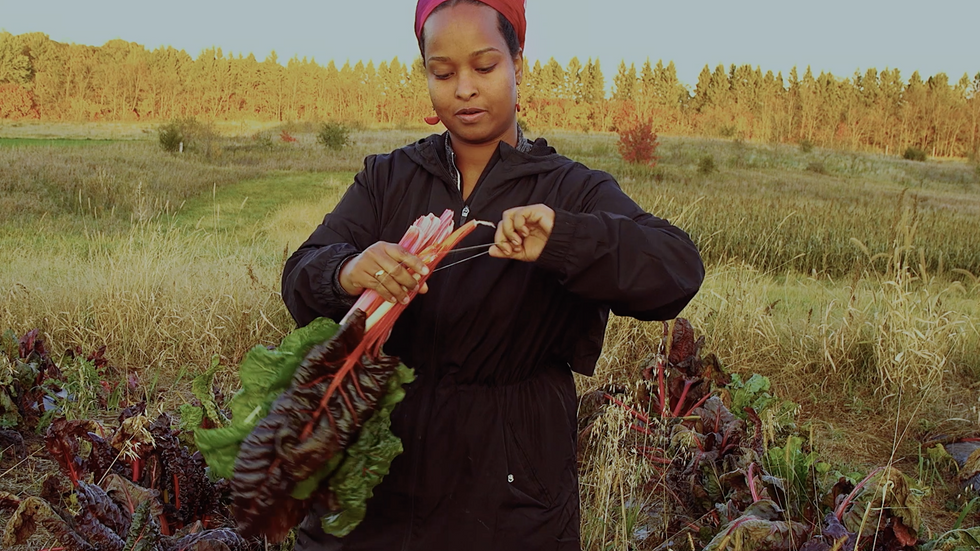 Naima Dhore is working to introduce subsistence farming to the Somali community in Minnesota.

Naima Dhore sits on her couch staring at her cellphone. Her son, Warsame, 6, rolls around on the carpet close by chattering about his day.

She's watching an old "PBS Newshour" video about Cuba's leadership in organic farming. And although she rarely denies her son full attention, she makes it clear the video is too important to ignore right now.

Dhore and her husband, Fagas Salah, are farmers from Somalia now living in Minnesota. They're in the early stage of a grand family experiment: They want to transplant some of Somali culture to a rural part of the upper Midwest, and see some important lessons in Cuban-style agriculture.

Dhore looks up from her screen to ask Warsame for five minutes of silence.

She just got back from an educational trip to Cuba. She went to learn about their food choices and organic growing methods to use on her farm.

"One thing that I take away that I think is really important is adding greens to the table and eating healthy. And that's what I'm trying to do—introduce that to the Somali community here," Dhore says. "We consume a lot of meat and bread and they consume a lot of rice and beans, so it's been really inspiring with what they're trying to do. It's community-based and that's the approach I want to take too."

Dhore and her husband consumed a lot of YouTube videos. They spent 1 to 2 days per week of about 3 to 4 hours watching farming techniques for a year. As she says, this is one of millions videos used as inspiration to become an organic farmer. Dhore hopes learning these methods will help her harvest seeds from her home country, Somalia, in her other home, Minnesota.

However, farming is also the second whitest job in the United States, according to data from a 2016 U.S. Bureau of Labor Statistics report. And in Minnesota, 99.5 percent of all principal operators in were white, and 99.3 percent of all farm acreage in the state was operated by white farmers, according to the state's most recent census of agriculture in 2012. But things are starting to change.

A 2015 demographic center report reflects the state's growth in farm operations led by people of color and women.

And in Marine on Saint Croix, Minnesota in the outskirts of the Twin Cities, there is Dhore.

Dhore, 33, is a Somali-American certified organic farmer. She and her husband first started out growing herbs in the bathroom window of her apartment. Now she has an eighth of an acre plot containing carrots, kale and Swiss chard at Big River Farms in Marine on Saint Croix, Minnesota. She and her husband are entering their third year as farmers.

She is focused on trying to grow a specific type of parsley, hot pepper, cabbage and carrot.

"Many farmers do bring seeds or have them sent by family members from their home country. I would say we have something that's brought from another country grown on the farm every season," Laura Hedeen, program manager of Big River Farms, says. "Right now, I don't think any of our Somali farmers are growing their traditional crops, but some that folks have grown in the past include hanchotte (Ethiopian root crop), Raafuu (Ethiopian green), Roselle (Karen sour leaf), Long Beans, Sticky Corn, etc."

Big River Farms offers a hands-on farming training program through the Minnesota Food Association, a local non-profit. The training focuses on supporting beginner farmers, like refugees, immigrants and people of color by providing land and equipment to start an organic wealth-generating farm business.

Through the farm, Dhore has established her own business called Naima's Farm, and has sold her crops to restaurants, in farmers markets and through a weekly subscription service through the Minnesota Food Association.

Others are beginning to take notice too.

"I have received so many calls from the Somali community, and most of them attribute their interest to Naima or one of the other Somali farmers in the program," says Hedeen.

A third of Big River's 17 farmers are Somali-American.

Out of the 74 black or African American farm operators in the state, 17 were women, according to state statistician Dan Lofthus. These numbers don't discourage Dhore from entering a field where she's historically underrepresented. She's affectionately rumored as the first certified organic woman Somali farmer in the State of Minnesota (I could not verify that with the state's department of agriculture).

"The hard work did pay off. It's beautiful to see the response and the love and support that I've been receiving," Dhore says.

Naima's farm is only a fraction of the 150 acres Big River Farm leases out to her, but she has big plans for it.

Not only does she want to work to diversify and regenerate farming in Minnesota, she wants to have a lasting impact on her community. She wants to support them by having access to healthy food through her crops and providing farming education workshops, so they could grow their own. She practices what she preaches with her two sons as well.

Her oldest son, Abduallahi, 8, doesn't know what he wants to be when he grows up. But he can admit he loves farming. He says farming allows him to make a profit (his mom gives him $1 for his help), get exercise, feel happy and have fun. He's even certain of the crops he wants to grow for the next season. He wants to have a layer of carrots, corn, onions, swiss chard, four to five apple and orange trees. But what gets him super excited is the possibility of the oats he and his father planted.

"This is want an oat looks like up close," he says, as he displayed the oat he yanked from the ground. "They're cool. You can use them for oatmeal. I just want to use them for cereal. I won't add sugar, I'll leave it this way. I'm not saying it's going to be easy making the cereal, but it's going to be fun."

She finds it very rewarding that her children understand growing their own healthy food and giving back to their community. Abduallahi and Warsame have donated food each time they have worked in the farm and they have no plans of stopping that tradition.

"My mission is to contribute something great in America. Now that I have gained new knowledge in farming, I want to encourage and empower young people to consider agriculture and increase land access for immigrants who want to farm," Dhore says.

"My hard work shows that I have a platform that I could use to motivate others to go after their dreams or goals, even if it's not in farming, but never give up and any challenges that comes your way to push yourself until you achieve it."