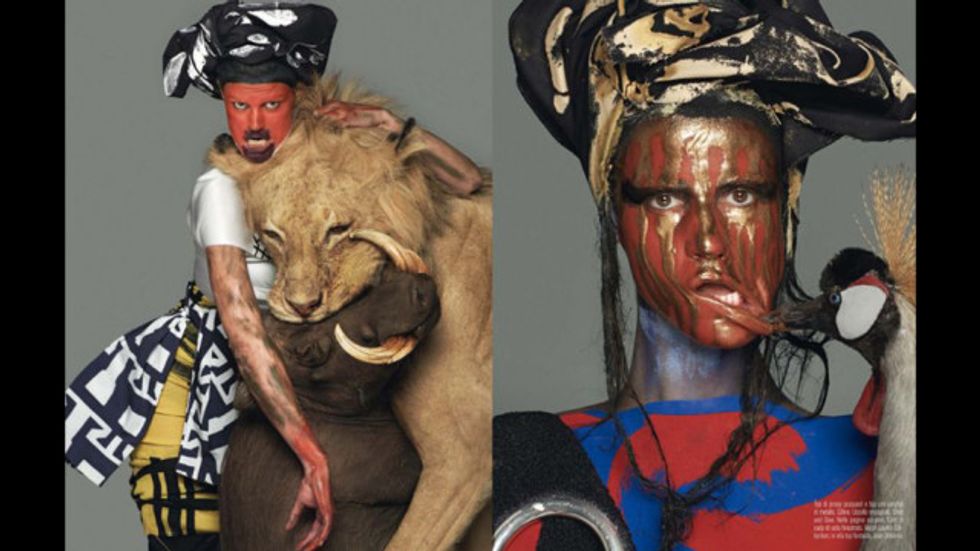 Vogue Italia releases yet another offensive and racist editorial called 'Abracadabra' for March 2014.

Here we go again! Blackface and its different shades are still trendy according to the latest Vogue Italia feature. For March 2014, the magazine released Abracadabra, an editorial featuring Dutch model Saskia De Brauw as a "primitive" wearing expensive designers garments (Chanel, Celine, Saint-Laurent) and posing with safari animals. Sigh. We still don't get how this garbage gets published.

The Vogue brand & magazine is one of the most recognized in the fashion industry, yet they continue to print racist editorials. Do you remember the Lebron James cover and the one issue of Italian Vogue featuring Slave earrings? What about the 'Vogue Black' section part of Vogue Italia? The latter is particularly troublesome. Yes, it's great to have a section featuring the black community but is it really necessary to separate all the photographs, editorials, designers, and models featured in the magazine according to skin tone and then bunch them up in a 'black'-specific site? They could just simply feature black models and celebrities in Vogue Italia without separating them from the rest.

Accountability is a major problem. Anytime Vogue publishes a racist spread like this one, they simply issue a letter of apology which gets shared all over social media — one will surely come soon about Abracadra. The issue is those letters don't erase what's been done and sold for profit. Yet the magazine always claims they don't recognize the offensive aspect of their editorials, playing the the innocent card. It's increasingly difficult to accept that they can keep repeating the same racist actions only to escape responsibility so easily.

Once again, this brings us back to the eternal struggle for diversity on the runway. When you saw these photographs, you might've thought about the cast selection. Why not hire a black model of African descent? We constantly talk about the lack of models of color in the fashion industry and many of our supermodels or veterans models like Bethann Hardison, Naomi Campbell, and Iman are fighting against it. We've already talked about this issue and its global impact. Over the years, the change is hardly noticeable and the debate is still ongoing. According to Jezebel, for this past February's New York Fashion Week, 78.69% of models were white, against 9.75% black, 7.67% asian, and 2.12% latin models and 0.45% others. It's easy to spot how ethnic models are heavily underrepresented. Looking past the obvious issues with editorials like this for a second: why are they even casting caucasian models to play 'exotic' cultures in the first place? Are the Vogue editors overlooking racism for 'cool' and 'edgy' points?

Obviously, regardless of wether it was a white or black model, Vogue Italia's editorial would still be highly offensive. The grotesques faces, exaggerate arched backs, lower lips pulled to the side, amongst other questionable artistic choices looks like 19th century colonialist caricatures.

We do have a theory, though. Guess what? Racism sells! This is not new but anytime this kind of editorial comes out, all media takes over and spreads the word about it.  Everyone will read, share, tweet and retweet the pictures, videos and pieces written about it. There will be a massive indignation campaign for a few days. What a better way to sell a cover! You'll tell us that our long-winded indignation is free promotion. But you know what, it makes us feel better to address the issue. Look at the the photos, talk about it. It has to be addressed, because if we don't we will never get rid of the little daily racism.