Wale: "I Look at Myself as a Black Man in America, But as a Nigerian First" 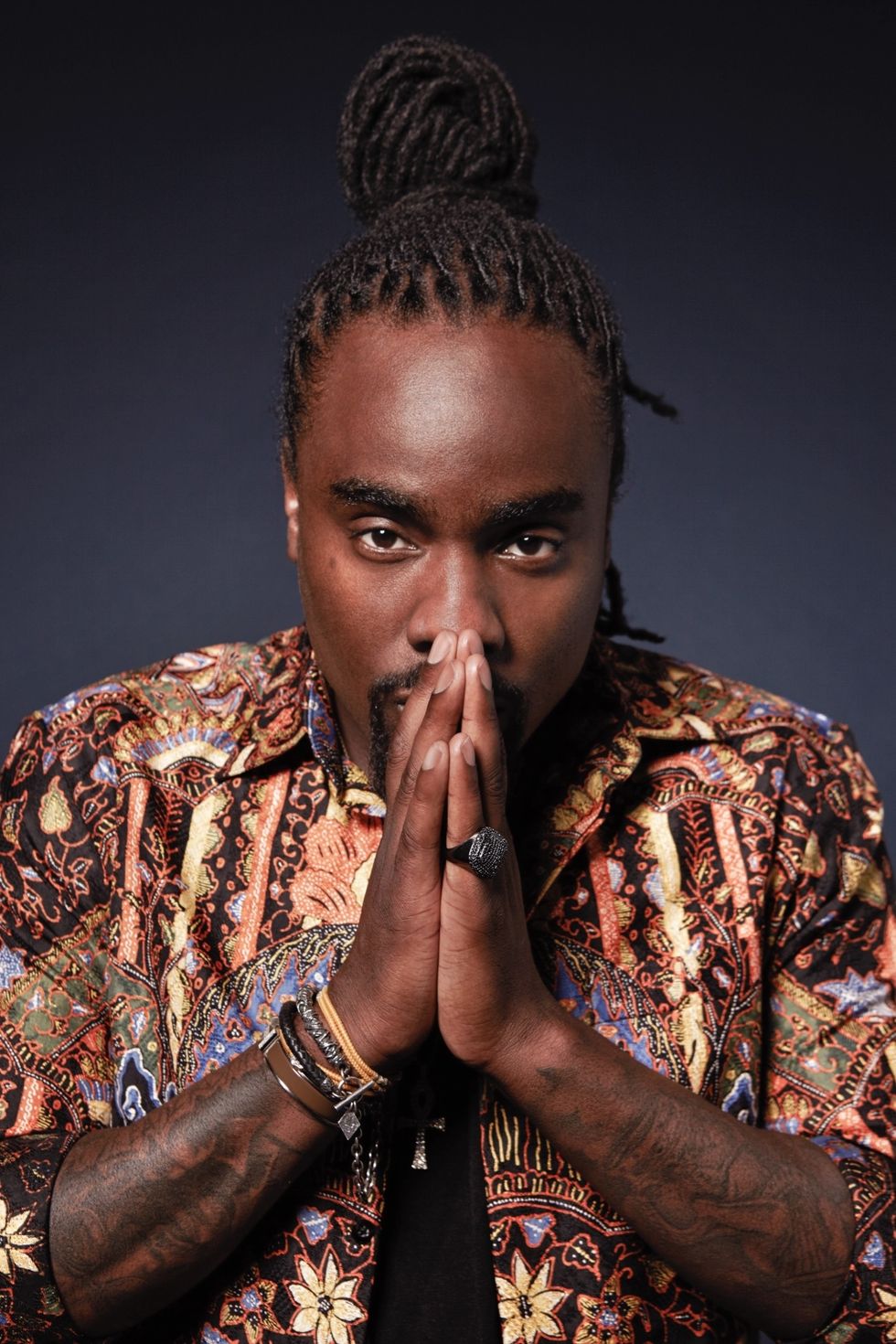 Wale sits down with OkayAfrica for an exclusive interview about his Nigerian roots and potentially leaving the rap game.

Who remembers Wale's "Pretty Girls"? Or what about "World Tour"? How about his feature on Waka Flocka's "No Hands" — one of the greatest club bangers of all-time? Or on the slower side of things, "Lotus Flower Bomb" with Miguel, which went on to win Best Collaboration at the 2012 BET Awards? And let's not forget "Bad" with Tiara Thomas, which gave him the trophy for Best Hip-Hop Song of the Year at the Soul Train Awards a year later.

Without taking into account his more recent releases, Wale is a walking catalog of hits. Having been in the game for over a decade, the Washington D.C. native is no stranger to the industry, continuing to flex his undeniable ear for what's hot and what's not.

With the difficulty that came with pronouncing his government name, Olubowale Victor Akintimehin, he took on Wale as more than just a moniker—it was his brand, his Nigerian roots. With both of his parents coming from the Yoruba ethnic group in southwestern Nigeria, Wale is a direct product of cultural diversity mixed with a heavy influence from the go-go music scene in the DMV.

Fast forward to 2018, Wale celebrates a new deal with Warner Bros. Records and releases two EP's, Self-Promotion and It's Complicated. At 34 years old, the rapper continues to live up to his stature in the mainstream and hip-hop realms alike.

We sat down with Wale for an exclusive interview below.

How do your Nigerian roots play in your life and career?

As rappers, you are who you are. That's pretty much self-explanatory. Both my parents are Nigerian. I grew up in a household of Nigerian culture. I look at myself as a black man in America, but as a Nigerian first. 'Cause that's my blood, I'm 100% Nigerian.

Who were some of your biggest influences growing up?

Mostly athletes. Michael Jordan, Barry Sanders. I played sports for like 14 years of my life. I played American football, and ran track and played basketball. As I got older, others like Michael Jackson and Jay-Z.

How has your Nigerian background shaped your sound and style?

I've always experimented with afrobeats and stuff like that. I've always been in tune with what's going on in Nigeria. I've worked with a lot of Nigerian artists.

Which Nigerian artists do you look up to?

Fela Kuti, Sunny Ade, a lot of them. We always used to dance to Shina Peters when we were young. Our parents would always play it in the house when we were kids.

You recently jumped on stage with Davido in Boston. How was that experience?

It was good. I show him love when he's in my city the same way he does when I'm on his side.

You've known Davido for a while.

I've known him for a long time. I think I met him in DC several years ago. We just always stayed in contact with each other. Obviously, Davido is in a different city every two days, maybe another country every two days. We always stay in touch. Any time we're close, we always link up.

You guys performed "Fine Girl," a standout off Shine. What was your dynamic like recording in the studio?

We were in Atlanta a lot. We were going out a lot. There's a nice Nigerian scene in Atlanta. We were just partying a lot around that time. We were in the studio and just going through beats. We got a lot of other songs too that haven't even came out yet.

Are we going to see him on your upcoming project?

You're always going to see Davido and me together. That's my dawg. Him, Wizkid, Olamide,I just did a song with Phyno. Even Kwesta and Sampha, I got love for South Africa. I spread it.

Speaking of, you have Olamide on the record also. Tell us about working with him.

He's one of the fastest workers and one of the most dynamic writers I know in any genre. He's very, very talented. I look up to him a lot in that sense.

The "Fine Girl" video is at over 4.4 million. Did you think it would blow up like this?

Yes. [laughs] I mean, we know how to make a good song. I'm not sure if my label that I was with at the time understood the influence of afrobeats on the culture, but I think the people held us down.

How was working with Wizkid on "My Love"?

Wizkid and I have been working together for maybe over six or seven years now. We have probably put out eight or nine songs together. That was easy. We were in the studio with Eric Bellinger one day, and we just cooked it up.

The music video for "Black Bonnie" is incredible. Can you pinpoint the moment you realized you wanted to execute such a tribute to black women all around the world?

I write music. I write whatever's is on my mind. If I'm looking at something, watching a movie, or whatever it was at the time, music is pieces of what you're thinking about. That's where my mind was that day. I always try to show love to our women, because they don't get as much love as they deserve sometimes.

What were the African inspirations in the video?

How did you link with Ashley Blaine Featherson?

She's from around the way. She's doing her thing on the Hollywood side. I'm a big fan of her work. She's a very, very talented multi faceted black woman. She rides for me. She rides for me like I ride for her. She's a real one.

You recently tweeted about celebrating your last months as a recording artist. Do you plan to retire from the rap game?

I've been kind of thinking about doing other things. See how it goes. Only time will tell.

If you were say to go into acting, will you still be making music? Or is that something you want to set aside?

Everything happens to fast in our culture right now, I wouldn't be able to accurately tell you what's next, and truly believe it. There's so many detours.

Why are you thinking of retiring from the rap game?

I think the people that follow my music really well, they know. I drop a lot of clues in it. I want to kind of leave that up for interpretation.

You mentioned wanted to get into film but facing some barriers. How has the journey been thus far and how to plan on navigating those obstacles?

Everything that you do in life is going to have roadblocks. And real ones persevere. Whatever I do decide to do, I hope that I don't give up. I just keep fighting. Keep trying.

I know you've struggled with mental health in the past. How has music been a form of therapy for you?

Music has been therapy, the music business has been the reason. The cause of the problem, for real. But you know, I get through life by making music. Tomorrow is another day.

I was present when you did the panel for the music video in Hollywood with Karen Civil, Zuri Hall, and others. What did it feel like being the only male amongst all those powerful, black women.

Intimidating, for sure. Black women that are super smart, powerful, and command so much attention, I'll be shy around them. It's a good shy, but I do get shy around women like that. And that's fine. That's just me keeping up with you. Women like Zuri who are super confident, it's not easy. [laughs]

What was the dynamic like creating the "Black Bonnie" record with Jacquees? Were you guys in the studio?

Yeah, we actually created it in the studio in an hour. He's an incredible writer and a really hard worker. We cut about four or five songs that day, and he kept going. I was like, "Bro, we can come back tomorrow. We did a lot." We were in Los Angeles. I think it was Westlake Studios.

You've been in the game for over a decade. Have you had to adapt to this new wave of trap and rap.

See, Gucci Mane was doing trap before I even came here. I don't think there's anything to adapt to. I've always been a very diverse MC. Whatever type of genre or sub-genre, whatever you want to call it, I always work with someone that can finesse a record in my own way without compromising what I stand for.

What can fans expect from the upcoming project?

A wise man named Jermaine Cole told me once, "You don't have to tell people what to expect from your project because then they'll feel like they've already heard it, before they've heard it." I kind of want to stay by that right now. Just enjoy the show. When it comes out, you don't know what to expect.

What's been the best part of joining the Warner Records family?

Having a job. [laughs] I mean, their staff is very friendly. We all learn from each other. It's been a great experience to stand in my own shoes, I guess to say. Compared to Maybach Music, now I have a building that's my own main space to experiment and try different things, which is always dope.

Well, Michael Jackson. [laughs] Dream collab now… I really like H.E.R. I like Bryson Tiller. I like Sade. I've been dreaming for that, but since that would never happen...

You recently created winter ski gear that pays homage to your African roots. Any other ventures in the near future?

A few fashion collabs and definitely more acting. Just honing in on more executive and business ventures outside of music.