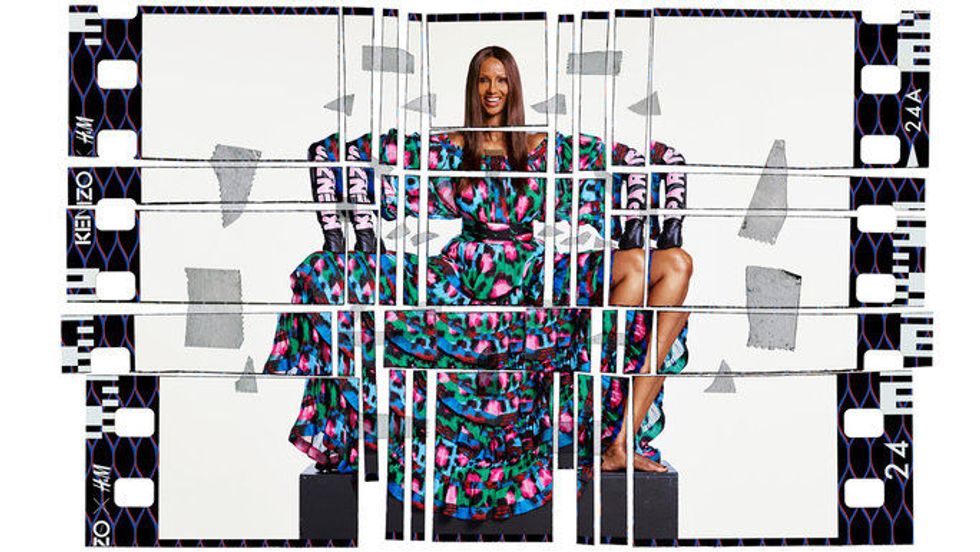 And the 61-year-old model-icon continues to glow as the lead campaign for Kenzo and H&M’s collaboration arriving in stores Nov. 3.

Ahead of the full campaign photographed by Jean-Paul Goude that also features Chance the Rapper, actress Rosario Dawson, Vietnam’s “Queen of Rap” Suboi, and others decked out in coveted dynamic prints from the collection—rolling out on Oct. 17—Iman opens up about her Somalian background as an ambassador’s daughter, and how her life changed dramatically overnight.

“We left Somalia on foot, literally, from Somalia to Kenya and the Kenyan government took us in as refugees. So, I have never forgotten the non-government organizations that really helped me when I was a teenager," she reveals. "I just wanted people, really, to understand, when they think about refugees, cause, you know, I am the face of a refugee.”

The founder of Iman cosmetics and wife of late music legend David Bowie mentions that she may have had a career in politics instead of modeling and entrepreneurship, until she realized that being a private citizen has its benefits.

“I wanted to major in political science,” she says wearing a multicolored, off-the-shoulder design from the forthcoming Kenzo and H&M collection. “I wanted to become part of the politics of in Somalia, but boy am I glad that I didn’t because I really feel if you are within a government, obviously you don’t have your own voice. But as citizen, I find that I have more freedom to speak about anything I feel passionately about.”

You can watch the ever-graceful Iman speak firsthand about her experience below: