We Did It: Three Years of #FeesMustFall Finally Bears Fruit 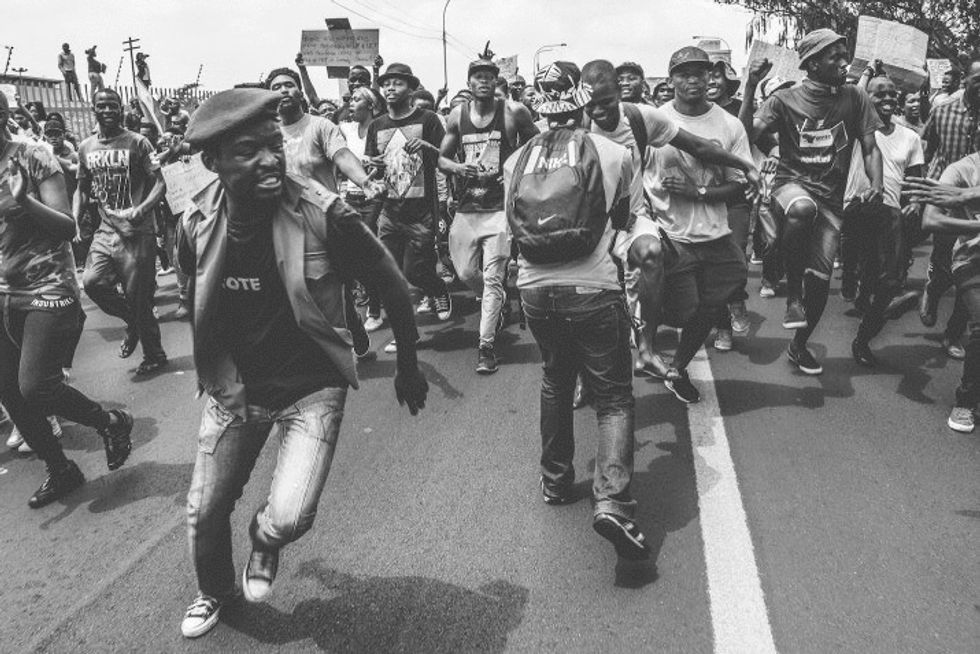 Yesterday, South African Minister of Finance, Malusi Gigaba, presented the long-awaited 2018 budget speech. While he was heavily criticised for increasing VAT and the fuel levy, which will heavily impact the poor, students celebrated the R57 billion that will finally be set aside to fund their studies in their entirety.

It was 2015 and I was at the Union Buildings in Pretoria, along with thousands of students from all over the country, waiting to be addressed by former President Jacob Zuma about our demands for a 0% increase in fees for the following year. We were capable students, worthy of being at universities but we were also black and lacking the money to access institutions which were fast becoming financially exclusive. While our core demand was eventually met, we knew it wasn't a complete victory—what about the fees for the following year and the year after that? I still remember how days after that epic march, my ears were still ringing with the phantom sounds of struggle songs and the whizzing of rubber bullets. I don't know if South Africa or the world will ever truly know how that fight scarred so many of us.

In the years that followed, we watched as the government (which claimed it had no money to allocate to tertiary education) squander state resources time and time again. We protested relentlessly; fiercely. We were shot at by police, our campuses looked like war-zones and we wondered whether we would attain the degrees upon which our families hopes rested so heavily.

After Jacob Zuma's resignation a few days ago, I wrote about how the ANC would embark on a journey of some serious ass-kissing in the run-up to the general elections in 2019. I warned Fees Must Fall activists that if ever there were a more opportune time to act, that it was most certainly now. R57 billion rand has been allocated for the funding of tertiary education for students whose household incomes are less than or equal to R350 000 per annum. This will assist not only the poor black working class but the black "missing middle" as well. The entire duration of their degrees will be funded with the added promise of supporting students in terms of food, transport and accommodation costs, all key to making this announcement a full victory and not just a partial one.

Now does this magically solve all our problems as black students? Does it do away with the rampant inequality prevalent on all our university campuses? No, it does not. But what it is, is a step in a very hopeful direction. Of course, it remains to be seen whether this R57 billion will actually serve its purpose and not be misappropriated like so many of our state funds in the past. However, our acting President Cyril Ramaphosa, is looking to make a big splash. He's looking to garner not only our support but our lasting support, so it would stand him in good stead if he ensures his government keeps their word. He has seen (or at least read about) the destruction, the chaos, the physical and psychological damage to our young members of society following numerous Fees Must Fall protests and clashes with the police.

I will never forget that day at the Union Buildings when the police started throwing stun grenades at us and unleashing a barrage of bullets. I will never forget how a young male student stumbled towards my friend and I, his face completely drenched in blood. I will never forget how my friend and I ran out of sheer, naked fear, blindly into the busy streets of the Pretoria CBD and eventually hid ourselves behind a nearby bus stop. I was not as active on the frontlines as so many other students were, not in the least, so I can only begin to imagine the kind of trauma they still have to wrestle with till this day.

The #NationalShutDown in Cape Town on Wednesday, October 21 2015. Photo by Imraan Christian

That is why this announcement, as much as it was a string of words on a piece of paper for a lot of people, meant so much more to the rest of us. It's a sigh of relief for many black students. It means a glimmer of hope for so many black families. It's a chance to dream and to do so without inhibition. This is all we've been fighting for and it feels so damn good to allow ourselves, even for just a moment, to bask in the light that seemed so elusive back then.

Our fallen comrade Solomon Mahlangu, the young man we sang about in our struggle songs, once said that his blood would nourish the tree that would bear the fruits of freedom. He told us to continue the fight. And so to all my comrades, amandla!