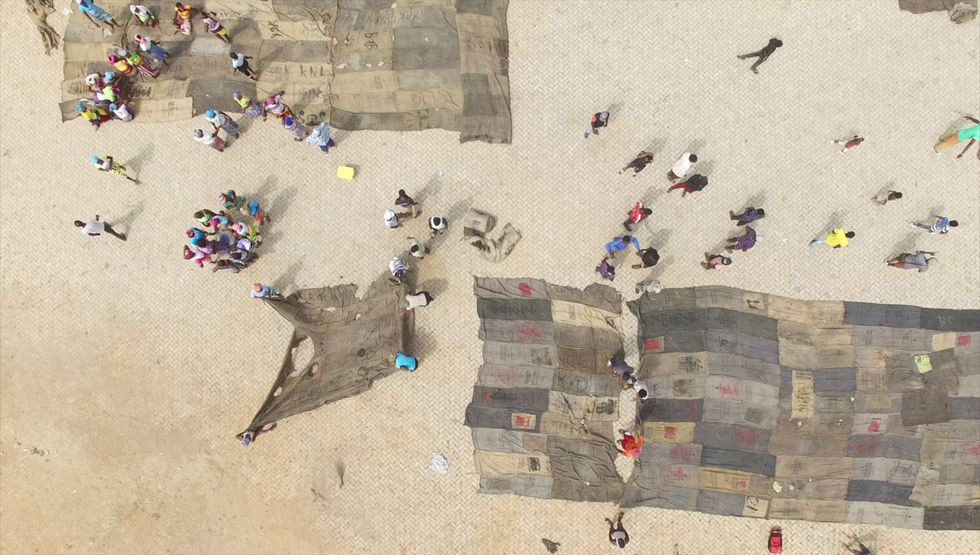 Editors Note: OkayAfrica’s UK correspondent, Sabo Kpade, gets deep with Ibrahim Mahama for our first edition of Sunday Reading. This is part 2 of 4. Take a look at Part 1 here.

A shoe maker’s box is a multi-functional unit usually made from wood and used variously to store cobbling tools, drummed on to solicit business and for some—especially the nomadic ones—as a stool to work on.

These boxes are the fragments that make up the monumental whole that is Non Orientable Nkansa. Its present incarnation at White Cube is composed of about 1 500 boxes from a total of 3 300. The other 1 800 odd boxes are in storage and the entire work is conceived of and sold as one unit.

The near-half that is exhibited in White Cube takes up much of its North Gallery and rises from the floor to the ceiling. I tell Ibrahim Mahama that for White Cube to exhibit all 3 300 boxes, the entire building will have to be expanded and its name changed to White Quartic maybe. This only makes him laugh.

OkayAfrica: Did the shoe makers give up their boxes easily? Is it ever an easy exchange?

Mahama: No, they don’t. Of course they don’t. It’s very difficult. Most of the exchanges in the end are not possible. It’s not a bad thing rather a good starting point.

What are the properties of shoe shine boxes that you’re drawn to?

It was important to somehow refer back to this idea of industrialization within that system, and also the history of architecture. What I was interested in, in the beginning, was exchanging these boxes. Later on, I was also interested in the resemblance between specific structures and the boxes as they are.

When you place them on the ground, several of them, it almost looks like some kind of a city or a town, like various homes and other things. Some of them are open, some of them are broken so you can see the cobbler’s tools within them. I thought it was somehow very interesting, or very representative of modern architecture. I was much more interested in how all these various boxes could come together to form some kind of a structure. The work in the White Cube is just one of those structures. It could be anything.

So you can take apart the boxes and build a new different structure from it?

Yes. It could take different forms. Most of the boxes are made by people who come to the city and they use all pieces of wood, and other things to make these boxes. They use it for material, and when they’re leaving, they give it to people who then give it to other newcomers in the trade. There are dates and markings that are written on it, and it gets transferred from one place to the other. I was interested in also somehow intervening at the point within that system and that’s when producing within old industrial systems became important.

Have the cobblers who have contributed to Non Oriental Nkansas seen the final work? If yes, what has been the general reactions?

Yeah, they’ve seen most of these compositions, and the reason also is because there was a lot of antagonism within the production of this work. Because a lot of the cobblers who were helping me somehow thought that the boxes were linked to present day politics. They thought that I was collecting these boxes for the incumbent government.

There was a rumor that there were traders and other people who were crossing the borders to come and hawk illegally in the country. And that we were going to give it to the Togolese and other people who would cross the border, carry these boxes pretending to be shoe shiners, and then come and vote in Ghana. Isn’t that an interesting fiction? I love the absurdity of these encounters, that’s what inspired the title of the piece ‘Non Orientable Nkansa’.

Why is it called Non Orientable Nkansa?

Nkansa is the young man who is actually assisting me in exchanging many of the boxes and working closing with my studio assistant. He was also the figure helping me to fully build the work over these years so i decided to name the work after him. I have worked with many collaborators on this work but most of it started with him and a few others.

Then also “Nkansa” was important because the antagonisms, and the few forms and their relation was something that I couldn’t just quite understand or place. I thought that was important to combine different views, and to piece it together as a title for the artwork.

It must have taken a huge and concerted human effort to build the work. How many people were involved and did you supervise them all?

I don’t know. I think in general we might have had close to around 100 people involved in the entire production of the work. At various levels over the last three and a half years. Because sometimes I would leave it and then come back to it. Also, I had a lot of various collaborators who were working on this, even at points where I couldn’t quite track.

If only a tracking device could be attached to one of these boxes, it’ll be interesting to see the life cycle they go through before getting to you. I’m sure it will add to the already strong narrative of how Non Oriental Nkansa came to be.

All these things (the shoe boxes and materials found in the old paint factory) were somehow important to kind of expand upon this idea of what each individual object meant, within the system. Somehow, when we come back to the very present day of having to experience the same object within society, we can begin to read a lot of more meaning to it. Not just as an ordinary or a common box.

This kind of heterotopic space almost brings out all sorts of different spaces together, within one specific object that someone carries around the city and contributes to its development, and at the same time doesn’t really have a space within this entity. I thought it was somehow a very, very interesting contradiction. I enjoy the paradoxes within these objects and the other possibilities.

The shoe boxes are cobbled together sometimes from different pieces of wood which you then break down and make into the boxes as they are. The reconstitution is at least two fold before the structure is then assembled and disassembled when exhibited in different spaces. What is it about reconstitution and repurposing that you’re drawn to or enjoy?

In the moment of producing it, it’s not so enjoyable because there is a lot of work with a lot of various characters and collaborators that I give a lot of freedom in terms of deciding what the object becomes. I don’t even personally have a hand in the characteristics of the objects that I make. I thought that was somehow very important, because most of the people that I work with, come into their work with a lot of various experiences. I thought this would open up the parameters of the making of the artwork. Politically it’s important to make these decisions.