Sinkane On Being The Musical Director Of 'ATOMIC BOMB! The Music of William Onyeabor' 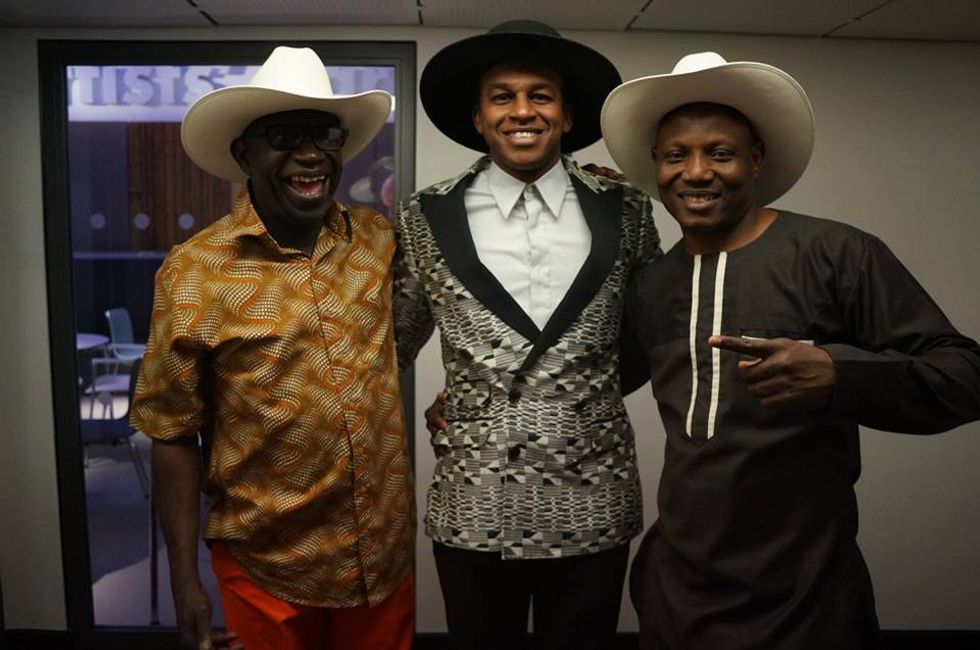 Ahmed Gallab of Sinkane on his role as musical director of Sinkane On Being The Musical Director Of 'ATOMIC BOMB! The Music of William Onyeabor' for RBMA.

The stateside premiere of ATOMIC BOMB! The Music Of William Onyeabor, a two-night live tribute to the music of 1970s Nigerian synth-funk mystery man William Onyeabor, is set to be one of the highlights of Red Bull Music Academy in New York.

We spoke with musical director Ahmed Gallab of Sinkane about his experience and role in this star-heavy project.

Okayafrica: So how did this come about, can you walk us through the steps that made Sinkane the musical director of ATOMIC BOMB! The Music Of William Onyeabor?

Ahmed Gallab: Last summer we played Okayafrica's Summerstage show with Femi Kuti and King Britt. Eric [Welles-Nystrom] from Luaka Bop was there interviewing Femi for the Onyeabor documentary. He asked me if I knew of him at all and I said, "Yes, of course!" We met up shortly after and they asked me if I wanted to be involved in a live show of Onyeabor's music and I said, "Yes, of course!"

OKA: How had you come across Onyeabor’s music beforehand yourself?

AG: I first heard William Onyeabor's music on Luaka Bop's World Psychedelic Classics Vol. 3: Love Is a Real Thing compilation. I had just finished University and was starting Sinkane. That compilation really inspired the vision of Sinkane. When Luaka Bop told me that Money Mark would be involved in the project I was sold.

OKA: What was the process of getting these songs ready for a live band?

AG: Sinkane — Jason Trammell, Ish Montgomery, Jonny Lam and I — rehearsed three days a week for one month alone before working with anyone else. I would play songs from my computer and the four of us would vibe it out until it sounded right. Jonny Lam charted out all of the music on a chalkboard wall in the rehearsal space and then, eventually, on paper. In March we started rehearsing with Pat Mahoney, then, the last week before we left for the UK, Mark came and all six of us rehearsed together. In the UK we met up with Jas Waton (horn section leader), percussionists Lekan Babalola and Ayanwale Ogungbe and the guest singers. It was my job to lead the rehearsals and make it all come together. It was a very challenging task and I'm so happy to have done it.

It's very important to me to stress the hard work all these guys have put into this project. Without the support of Ish Montgomery, Jason Trammell, Jonny Lam, Pat Mahoney, Money Mark and Jas Walton I would've lost my mind.

OKA: The band's roster is pretty incredible — The Lijadu Sisters, members of Hot Chip, LCD Sounsystem, The Rapture, Blood Orange. How did you approach working all those individual talents into a cohesive live band?

AG: Since this music was never played live I felt a lot of pressure to make sure that it was presented well. Having all of these talents involved was like piecing together a jigsaw puzzle. Everyone played a specific role to the project and each other and it was a fun challenge figuring out how.

OKA: Two of the iconic names that have joined the band are David Byrne, for the NYC shows, and Damon Albarn in London. How involved were they in the rehearsal and live band process?

AG: Damon Albarn came to one rehearsal prior to the show. I've been in contact with David Byrne's assistant through out the entire process and his involvement will be special. Both guys are big fans of William Onyeabor and it has been an honor to work with such incredibly gifted people.

OKA: The Onyeabor reissue and shows have been extremely popular. What would you say is the appeal of William Onyeabor's music to a 2014 audience?

AG:It just feels good. There's nothing more to it.

Catch ATOMIC BOMB! The Music Of William Onyeabor live at BAM on May 2 & 3 as part of Red Bull Music Academy New York.