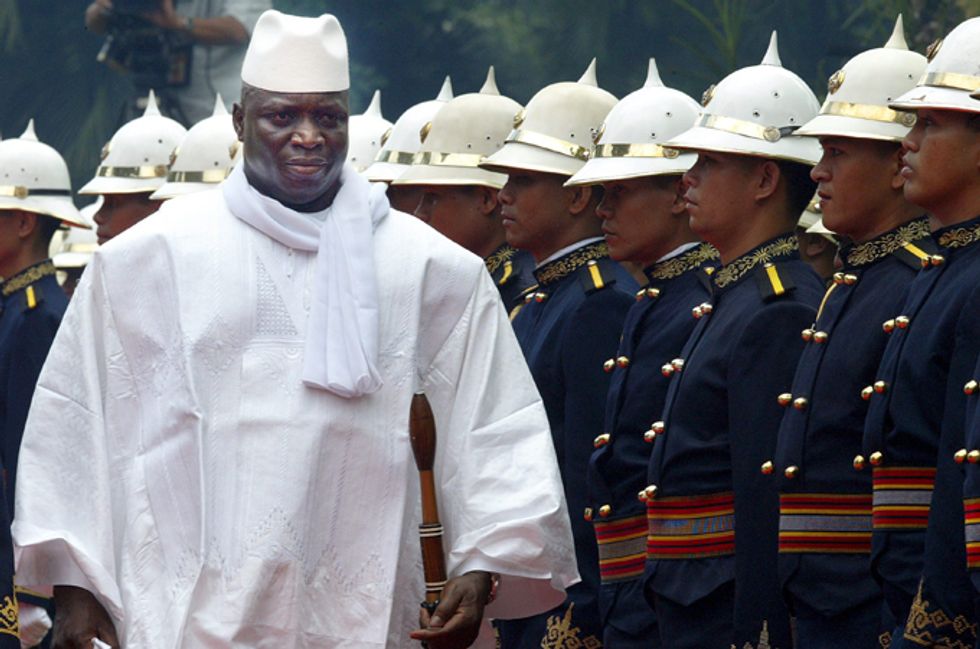 The Gambia, the smallest country on mainland Africa, has a reputation for being the "Smiling Coast of Africa," thanks in part to its stunning coastline and abundance of natural beauty. What many outsiders forget, however, is that the country was at the heart of the trans-Atlantic slave trade. Gambian lore is thus inherently linked to Kunta Kinteh, arguably Africa’s most famous slave whose epic refusal to bow to a slave-owners’ whip and chain is the stuff of legend. Kinteh’s saga has come to symbolize the larger struggle for marginalized peoples everywhere to persevere against oppression and put a name to the thousands of faceless Africans who stood tall and forthright against the colossal aggression of the African slave trade.

For years the Gambian government, under the dictatorship of Yahya Jammeh, has been cashing in on the Kunta Kinteh appeal to boost tourism and guard its image from condemnation over massive human rights abuses. The contrast between the generations of Kinteh and Jammeh is stark, particularly when viewed through the prism of slavery and bondage on the one hand, and post-independence political excesses on the other.

Since 2003, The Gambia’s tourism ministry has been organizing the International Roots Homecoming Festival. The purpose of the event is to act as a staging post for the emotive “homecoming” of people from the Diaspora. Through the years, the festival has become a major international event, attracting a number of renowned black artists.

While the legacy of Kunta Kinteh has been helping The Gambia draw positive attention over the years, the country’s citizens, since 1994, have been suffering under one of the most heinous and unaccountable dictatorships on the African continent. Yahya Jammeh (known officially as Sheikh Professor Doctor Alhaji Yahya Abdoul Aziz Jamus Junkung Jammeh Nasirul Deen Babibli Mansa) has been referred to as a megalomaniacal dictator and is renowned for his bizarre public outbursts. Jammeh also claims to have the power to cure HIV/AIDS, and most recently, Ebola.

During Jammeh’s two-decade reign, the arrest and detention of journalists and regime critics has become the norm. Arbitrary executions, torture, and enforced disappearances are so commonplace that the international community barely bats an eye when information about such crimes trickles out. Gambian torture victims narrate ordeals they have suffered at the hands of a “secret section” of the security forces known ominously as the Junglers, who run covert torture chambers throughout the country. These victims tell spine-chilling stories of electric shock, whipping, and bone-breaking sessions.

Jammeh also stands out in a class of his own for his frequent and menacing anti-gay vitriol. During The Gambia’s independence anniversary in February of this year, for example, Jammeh castigated LGBT people as “dangerous vermin” that must be fought with the same vigor and urgency that the government battles malaria. Most recently, he was filmed during a “Meet the People” tour, exclaiming enthusiastically: “Whoever wants to advocate for gay or lesbian rights, we will kill you like a dog…if the West wants gays and lesbians to have rights, let them get visas and resettle them.”

In the days of Kunta Kinteh, people were bought and sold as slaves. In modern-day Gambia, it’s a different kind of enslavement in which basic human rights are denied or severely restricted, where Gambians are herded as “free labour” and forced to till Jammeh’s land across the country. These scenes are painfully and eerily reminiscent of the forced slave-labor system witnessed on plantations in the American South.

To be clear, some Gambians are propelled by a genuine desire to work for His Excellency, but a great deal are forced to participate out of fear of losing their jobs or running the risk of being branded opposition sympathizers, a transgression that often leads to prison time. In a country where arbitrary detentions are rampant and widespread, and fair trials are the exception to the general rule, Gambians understandably go to great lengths not to cross the Jammeh regime.

Unlike the era of slavery during Kunta Kinteh’s lifetime, no one in The Gambia, save for the country’s ever-rising prison population, is shackled in physical chains. In today’s Gambia, those shackles are more psychological, thanks to widespread fear and anxiety that force people to whisper opinions even in the relative safety of bedrooms. For Gambians today, the choice is between living a lifetime in shackles or choosing a life of exile. To take but one example, over 100 journalists have fled the country due to persecution since 1994, the year President Jammeh came to power through his “bloodless coup.”

The political opposition has no access to the state media, which has become a transparent propaganda outlet for the Jammeh regime. It’s up to the police, an unabashed apparatus of the ruling party, to determine if a permit should be issued for an opposition rally. Several years ago, an opposition leader was jailed for one year for holding a megaphone in public without a permit.

Dissenters are refused travel documents. Even religion is not spared. A prominent imam is currently on trial for holding Eid prayers on a day different from that of the government. A former minister was jailed for life for printing t-shirts with the slogan “End dictatorship now.”

The overseer and enabler of this misery is Jammeh’s National Intelligence Agency (NIA), the omnipresent institution of oppression, which leave their indelible marks on the public mind about what awaits dissenters who refuse to toe the regime’s line.

Taken together, the Gambian government, which is single-handedly controlled by President Jammeh, plays the part of a 21st century slave master. Somehow, there are still apologists who dismiss the mounting human rights abuses as hogwash, as lies fabricated by the “imperialist West.” The Gambia is, by the apologists' reckoning, a land in which people enjoy a culture of free speech and peaceful assembly, a country worthy of the "Smiling Coast of Africa" moniker.

What a tragic misnomer. And what a disservice to the land that gave Kunta Kinteh, and the struggle that he embodied, to the world. Kinteh's story and his legacy collectively appeal to the universal yearning for basic human dignity to which all citizens of the world are entitled to, regardless of race, creed, ethnicity, religion, or sexual orientation.

President Jammeh, and his henchmen in The Gambia, would be well served to recall this enduring legacy and to act accordingly.

Jeffrey Smith is senior advocacy officer at the Robert F. Kennedy Center for Justice and Human Rights. Follow him on Twitter at @Smith_RFKennedy.