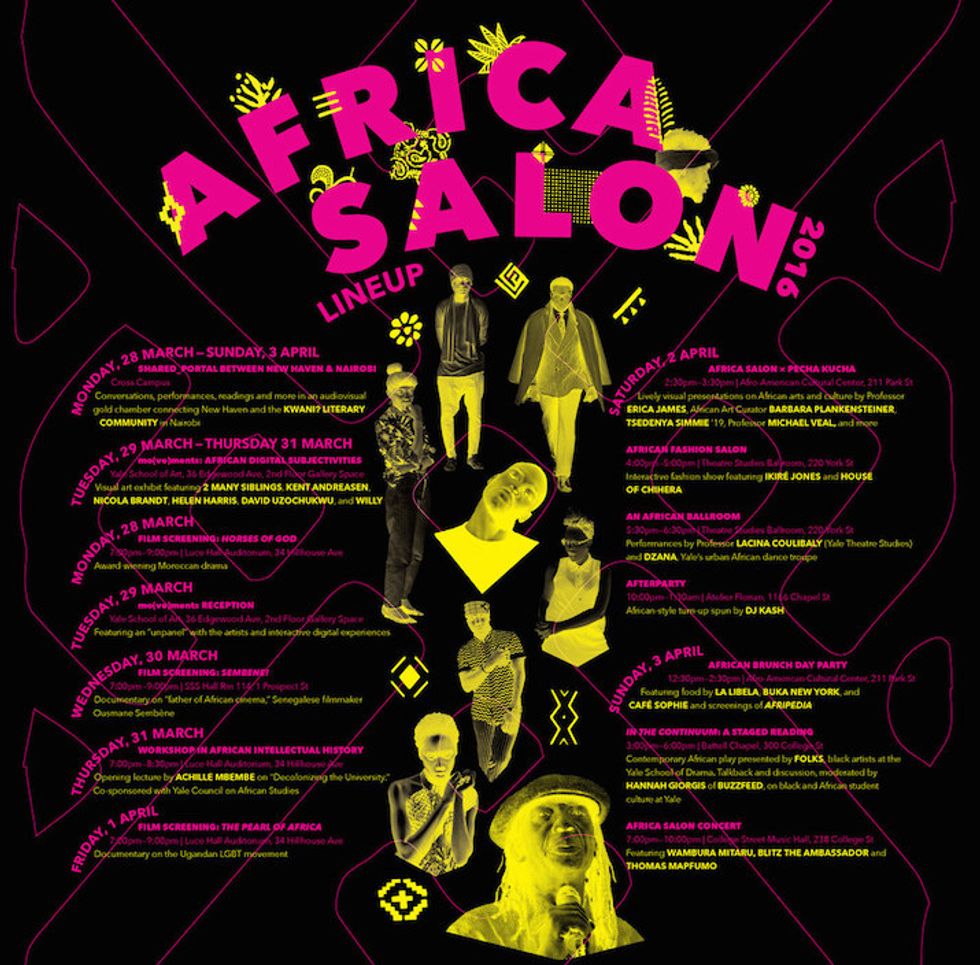 A few of our favorite people and projects are headed to Yale next month for the university’s second-ever contemporary African arts and culture festival.

Taking place March 28 through April 3rd, the 2016 AFRICA SALON features a week’s worth of exhibits, screenings, "unpanels," fashion shows, performances, parties and projects highlighting work by “some of the most consequential artists from the continent and the diaspora.”

This year’s lineup includes the likes of Achille Mbembe, Kwani?, 2manysiblings, Kent Andreasen, Hannah Giorgis, a concert headlined by Blitz The Ambassador and Thomas Mapfumo, screenings of The Pearl of Africa, Sembené, Afripedia and Horses of God, a fashion show with Ikiré Jones and House Of Chihera and much more.

As the organizers explain in a press release:

Contemporary African artists reveal the inaccuracy of images of Africa as a culturally stagnant, tech-less, and solely rural space. From the continent’s biggest cities, the diaspora, and elsewhere, African artists tell stories of urban life, grapple with the complexity of identity, innovate through digital media, and infuse the traditional with their own contemporary references to push the boundaries of the arts and destabilize narrow preconceptions of Africa. Through exhibits, fashion shows, “unpanels,” film screenings, performances, a “Portal” to Kenya, and a tantalizing “African brunch,” AFRICA SALON creates a space where local communities can experience firsthand the stories, images, sounds, and even tastes of Africa’s current artistic and cultural landscape.

Yale's AFRICA SALON returns March 28-April 3, 2016. Check out the full lineup below and sign up for the AFRICA SALON newsletter for information on upcoming ticket sales and updates.

For more, read AFRICA SALON curator Ifeanyi Awachie's full recap from the 2015 edition of the festival.