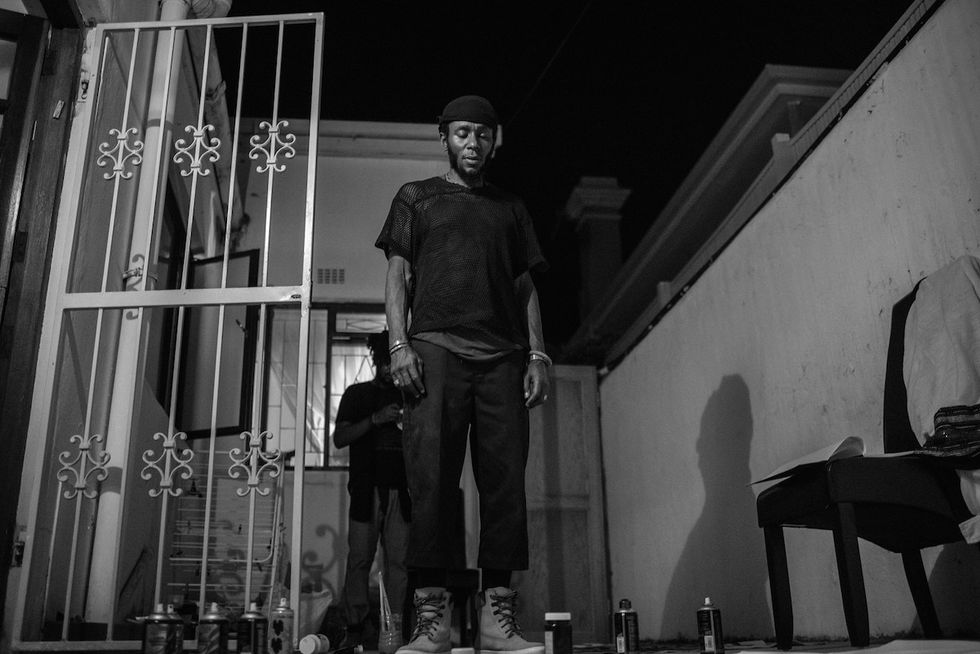 You probably know by now that Yasiin Bey, the artist formerly known as Mos Def, and journalist, artist, and relatively new producer Ferrari Sheppard have released a new album under the group name Dec. 99th. It’s different. And there is a lot of whistling on it... but I digress.

The project is a sharp departure from Bey’s previously released material under the name Mos Def. There are no soulful samples cut-and-placed head-noddingly over boom-bap beats, no rapid-fire raps expertly dismantling decadent institutions and societal practices, no ethereally lush and warm melodies with Mos pleading with a sincerity and urgency that moves, “I want black people to be free, to be free, to be free/ All my people to be free.”

December 99th seems to spiritually draw from and act as an homage to revered Brooklyn born artist Jean-Michel Basquiat. There are moments of no wave and new wave on the album. It tips its proverbial hat more towards post-punk than hip-hop, leaning to the avant-garde and experimental—the genre-melting palettes Basquiat himself dabbled in with the band Gray.

December 99th flirts, or is rather in a serious relationship, with darker tones, ambience, and reverb drenched vocals. The soundscape is industrial or postindustrial, and is further influenced by jazz and rock, disparate elements blended into a dystopian feeling of a devastatingly bleak environment. One where society is dried out from neoliberalism and capitalist over consumption.

Bey’s lyrics are often muttered lazily and hazily, his voice trudges along on a flatline and is abruptly jolted with a yell, scream, a lot of times a whistle, only to return.

The lyrics themselves are uninspired, especially considered it is Bey saying them. They blend into a foggy and indistinguishable blur. Bey’s voice floats in and out, outfitted with delay, at times singing, humming, and rapping.

Religious imagery hangs heavy throughout, “bismillah” Bey often says. Many of the beats have a dull quality. Tracks like “Heri,” an instrumental which Bey does not appear on, thrives. It’s lush and abundant and moody. The chords and drums are emotive and evoke a beautiful melancholy. There is also hella whistling on the album.

The lean, 10-track project feels longer than 31 minutes, like a continuous mix, due to Sheppard’s similar sounding instrumentals. Most tracks barely touch the three minute mark. Despite being recorded in South Africa, the project turns outwards.

Whatever influences that may arise from living in South Africa and traveling throughout the continent are noticeably absent, outside of a few trickles here and there, a sample at the beginning of “Heri,” perhaps. One thing there is hella of is whistling. I ain’t no linguist but the whistles might hold deeper meaning. Maybe they’re a nod to the language(s) throughout the continent that utilize the high-pitched sound. Or maybe not.

Most are more likely to be familiar with Bey’s previous collaborative album, 1998’s classic Mos Def & Talib Kweli are Black Star. Manifest Destiny was more of a compilation album filled with unreleased and re-released boom bap tracks from the early to mid 1990s.

Those keeping tabs will have heard multiple songs on December 99th prior to the album’s (so far) exclusive TIDAL release. The tracks “N.A.W.,” “Local Time,” “Tall Sleeves,” “Seaside Panic Room,” and “Hymn,” which didn’t make the album, were dropped in the months preceding the album’s arrival, offering a clear indication of the shadowy and smoggy sound direction.

Bey, who announced his retirement from the music game (and Hollywood) to focus on other endeavors, will be releasing two more albums before calling it quits. There is another collaborative album, the much hyped and delayed joint OMFGODBKNOLA project with New Orleans' Mannie Fresh which will be aptly titled As Promised. There is also one last solo Bey album coming called Negus in Natural Person. I’m personally not a big fan of the Negus title.

There are few tracks or moments that shine on Bey and Sheppard’s first (and perhaps last) album. In the end, December 99th, though attempting to push itself musically, ultimately falls short. The project feels like a producer and vocalist, blindly reaching in the dark, rapping when there should be singing, a snare when there should be a clap.

The potential in the album’s admirable experimentation is woefully unachieved. It’s off.

Also, there is hella whistling, which is cool, if you like whistling.