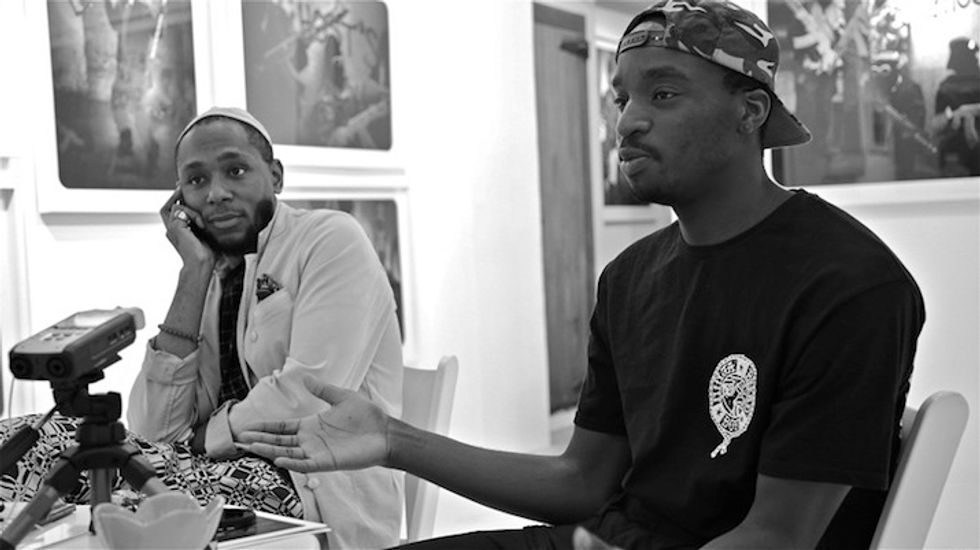 Yasiin Bey and Petite Noir talk Noirwave in an interview with Dazed Magazine.

Back in January Yasiin Bey (formerly known as Mos Def) surprised us all when he announced he'd be performing live from an undisclosed location on the continent to be streamed in real time on Okayafrica and Okayplayer. That location turned out to be a rooftop in Cape Town, the city where Yasiin's been living for just over a year now. During the stream we couldn't help but spot Petite Noir, aka one of our favorite Cape Town residents Yannick Illunga, on deck during the performance. Two months later, Yasiin gave a shout to the noirwave father in his Rolling Stone SA interview and Illunga Instagrammed a photo of "The king of anxiety X Yasin Bey in the studio." All signs pointed to a Noir Star collaboration in the works. Dazed Magazine confirmed our suspicions today in an interview with Yasiin and Petite Noir. "I really wanted to work with this guy," Bey told Sarah Claire Picton for Dazed from a studio in Cape Town. "I found out he was Cape Town-based through Abdi Hussein – a fellow Brooklynite who I’ve known for many years. So it was really quite natural. Yannick asked me if I wanted to do something on (forthcoming album) so he came to the studio and played some of his songs. A lot of the tracks really stuck out, it was incredible. I did a couple of rough sketches on a track and when I came back the following day to check it out I was actually really, really proud of it." Head over to Dazed for the full Yasiin Bey Petite Noir interview, in which the pair discuss "the South African sound," the possibility of Beyoncé and Future becoming hip to the "noirwave shuffles" and more. Be on the look-out for Petite Noir's next album, featuring Yasiin Bey.