Esu is Not the Devil: How a Yoruba Deity Got Rebranded 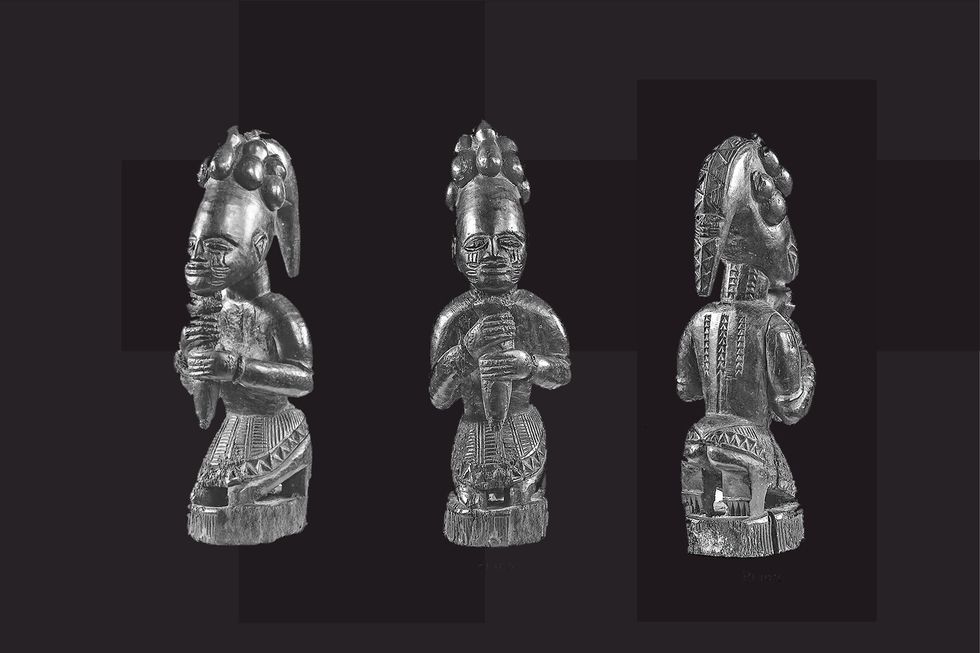 African traditional religions are widely misundertood—none more so than the Yoruba pantheon.

A striking sight greets drivers at Ojuelegba, one of the busy sites connecting Lagos Mainland to the Lagos Island. It is a small white cell with the words "Ojubo Esu" inscribed on its wall. Its presence in the middle of one of the world's most evangelical Christian countries, is a sign that traditional African religion is alive and well on the continent.

Despite its ubiquity, it's also not an understatement to say that most indigenous African religions are widely misunderstood—even on the continent itself, and amongst most "modern" Africans; many of whom shun these beliefs as evil superstitions.

From the sophisticated beliefs of the Dogon, to the sangomas of South Africa, most people have just a vague idea of these religious systems, writing them off as relics of a pre-civilised past. Nigeria, Africa's largest country is no exception to this phenomenon, and nowhere is this more notable than in the recent history of one the country's most captivating deities, Esu.

One of the principal deities of the Aborisa faith that emerged from the Yoruba society in Nigeria, and spread through the slave trade to Cuba, South America and the United States—his name has also been used since the 19th century interchangeably with the devil amongst Yoruba Christians. It's a contentious subject, and one that has increasingly sparked public debate.

The Aborisa religious system, now globally influential, is now a deeply misunderstood and widely disrespected belief system in its country of origin. In brief, this religious system is based on the idea of a supreme deity, and a number of primordial beings, called Orisa that represent elements of nature, as well as human and divine personality and ideas. The belief is underpinned by a divination system through which adherents get advice and guidance from the orisas and their ancestors.

Over the years, the orisas, the gods of this belief system have increasingly entered into the global popular imagination, most recently, Beyoncé evoked the Yoruba goddess Osun in her song "Hold Up"—some of the other gods include Sango, who is increasingly popular, and the subject of a forthcoming animated film made in Nigeria. Another goddess, Oya, is partly the inspiration for storm in the popular X-men series. Less represented is the Orisa known as Esu—which is weird given his prominence within the aborisa faith.

Simply put, in aborisa faith, Esu is the intercessor god, that devotees of all the other orisas have to pay homage to. But nowadays in the religion's native Nigeria, Esu is misunderstood as the devil. "Na devil do am" is a popular saying in Nigeria when someone does something wrong that they can't explain, or wish to disown. In essence, many believe that Esu is the devil that pushes people to do evil. But, according to devotees and most scholars, in the original Yoruba cosmology this wasn't quite the case – Esu was and is a much more complex figure and concept.

Christians argue he is the devil but the Yorubas just didn't know it, until the bible landed in their hands. How did we get here? In 1821, a young boy was kidnapped from a Yoruba town, Osogun in present day Oyo State, Nigeria, along with his mother, sister and baby brother. His name was Ajayi, and his story could very easily have been like the millions of other Africans kidnapped from their homes and sold into slavery in the 19th Century, but a twist of fate changed his fortunes. The slave ship taking Ajayi and other slave to the new world was boarded by British troops. Ajayi, later baptized Samuel Ajayi Crowther was rescued, and became one of the leading missionaries promoting Christianity in West Africa, and crucially, one of the leading figures translating the bible into local languages, including Yoruba.

When it came to finding equivalent names for Satan and Jesus in Yoruba; for Jesus, the name was Yorubanized to Jesu Kristi, but for the devil, the translators of the Yoruba bible chose an existing god in Yoruba belief, Esu. That fateful decision has haunted the understanding of Yoruba beliefs to this day. In an article for Sahara Reporters that sparked furious rebuttal, the journalist, Remi Oyeyemi, argues that Crowther did it on purpose, deliberately slandering and misrepresenting one of the crucial figures of Yoruba belief in an act of revenge against his people for their role in the slave trade.

As he explains, "Esu, in Yoruba cosmology is not the Devil or Satan as has been and is being portrayed by Euro-Christian religious school of thought. Esu, in the authentic Yoruba concept, is the enforcer of the Will of Olodumare and not the equivalent of the Euro-Christian Devil/Satan who is out to undermine the work of the Almighty God." In a riposte, also written for Sahara Reporters, Ayo Turton argues that Esu is the devil, and what Crowther and other missionaries did was to supply the missing link. Crucially Turton suggests that like Satan, Esu was cast out of heaven—but that's not part of Yoruba cosmology.

Whatever interpretation one accepts of Crowther's intentions, the case remains that the introduction of this Yoruba god into Christian theology, led to a misunderstanding of his function in Yoruba belief, leading many people to believe that aborisas venerating Esu are essentially devil worshippers. In concrete terms, it has set up a conflict for many Nigerians between ancestral beliefs and Christianity—rather than viewing both as distinct religious traditions, many see traditional beliefs as the devil's work being done on earth.

Yet, in recent times, it seems people are starting to reject this distorted interpretation and interact with Esu and Yoruba cosmology on its own terms. A group of cultural activists have a launched a campaign, complete with a hashtag, #EsuIsNotSatan; aborisa practitioners are also increasingly vocal and digitally savvy about discussing their faith publicly to challenge distortions. Whether these developments will lead to a better understanding of Esu and aborisa beliefs in Nigeria, only time will tell.

Dele Meiji is a writer. Follow him on @delemeiji. He also runs the blog: www.jebujene.org