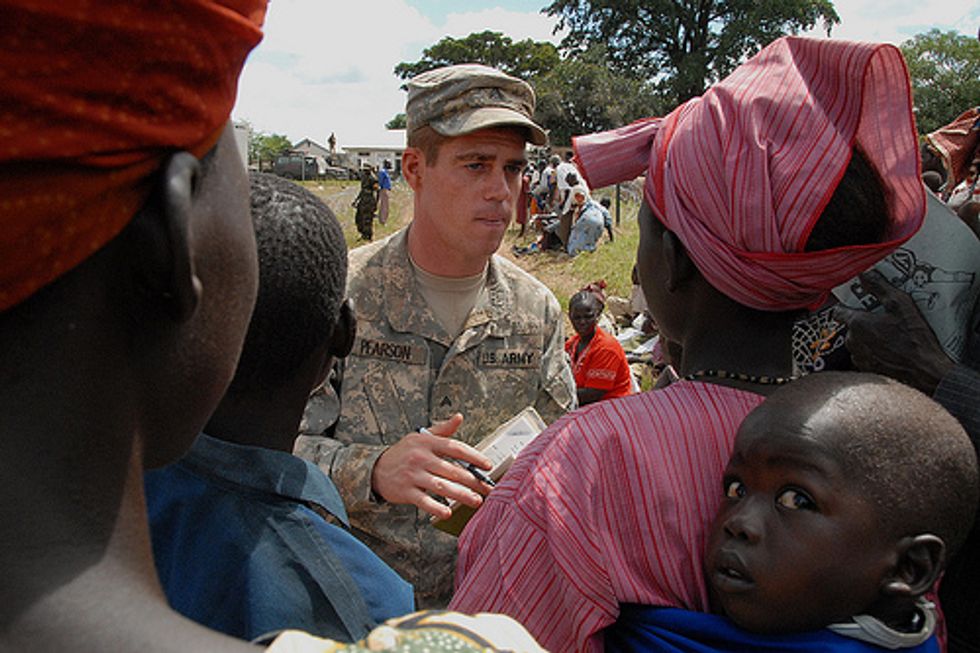 Last week President Obama announced that he will be sending 100 US troops into central Africa to help track down Joseph Kony, the leader of the Lord's Resistance Army (LRA), a militant group that has been waging war on the Ugandan government since 1987. They are perhaps most famous for their kidnapping of children to fill out their army's ranks. The U.S. has somewhat secretly subsidized and 'advised' the Ugandan military in it's efforts against the LRA for years, so it's unclear why there's now the big move to stifle Kony. We're curious if it has anything to do with garnering a stronger hold for Africom - the Bush-era effort to suppress terrorist groups in the region, or as the US government rhetoric states: "Africom is the part of [the Bush administration's] strategy to support African leaders to deal with Africa's problems."

One thing is for sure, this situation is far more complex than any mainstream news analysis would have us believe. Some reports have exoticized the motives of the LRA by calling the group "bush fighters in the middle of Africa," and "bloodthirsty." Awesomely, conservative radio talk show host Rush Limbaugh prefers to call them Christians. Yes, that's right. Check out an excerpt from a transcript of his show:

Lord's Resistance Army are Christians.  They are fighting the Muslims in Sudan.  And Obama has sent troops, United States troops to remove them from the battlefield, which means kill them.  That's what the lingo means, "to help regional forces remove from the battlefield," meaning capture or kill.

It's suffice to say that no one misunderstands the situation with the LRA more than Limbaugh - who will clearly say anything to challenge the Obama Administration. (Although it's true that Kony believes himself to be the spokesperson of God.) In a video posted this morning (above), Evelyn Apoko, who was kidnapped by the LRA as a child and miraculously survived, sets the record straight for Limbaugh.

For more information on the Lord's Resistance Army, we suggest this article on the 'myths and realities' of the group. Read Apoko's full story here.