10 Things You Need To Know Before Practicing Lucumí 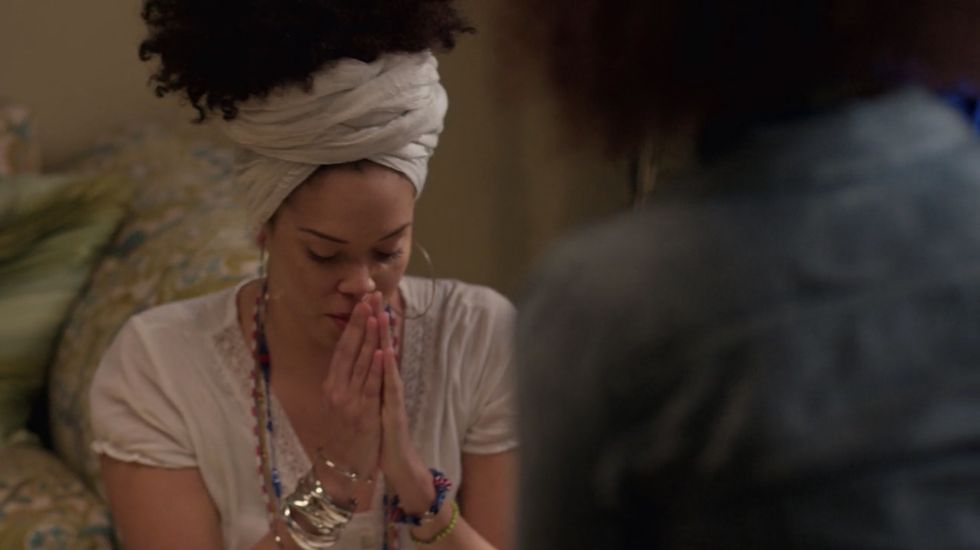 Santana Caress Benitez, who plays Mars' sister Lulu on "She's Gotta Have It," shares what you need to know before practicing Lucumí.

Spike Lee reimagining She's Gotta Have It as a series on Netflix was all we were obsessed over as we closed out 2017.

One stand out character among Nola Darling's lovers is Mars Blackmon, and as we got to know him, we were introduced to his sister, Lourdes or Lulu, a young, Lucumí priestess who we see give Nola some much needed clarity throughout the season.

Lulu's practice of the religion stemming from Yoruba spirituality on the show was as real as it could get—especially since Santana Caress Benitez, the actor playing Lulu, is a Lucumí practitioner in real life. The religion slightly differs from Santería, as it does not incorporate elements of Catholicism that many are familiar with.

Although she was raised Christian, the Afro-Boricua always wanted to be connected spiritually outside of that faith tradition. "I didn't buy the Christianity thing anymore," Benitez says. "And when I was 23 or 24, I met a Babalao, a priest of Ifá, and fell in love with him."

It was through her relationship that lasted over a year that Benitez was introduced to the practice. She then moved to New York after their breakup, wanting to sink her teeth into the practice on her own terms. She's been practicing for five years since, with the help and guidance of her godfather and New York-based professor, Weldon Williams.

A chef with a Chopped championship under her belt, playing Lulu was Benitez' debut role as an actor. She says she kept up with Lee on social media, when a recent exchange on Instagram prompted Lee to message her directly the summer of 2015.

"He asked me if I've done any acting," Benitez says. "At this time, the writers were still developing the show, and he asked, 'Would you be interested in auditioning for this role when you get back to New York?' But you can't say no to Spike, so I said yes."

When it came to filming the scenes that incorporated the practice, including Nola's initial reading and spiritual cleansing, Benitez emphasized that Lee and Iya AkileAshe, the consultant and a Yoruba priestess for 20 years, wanted to make sure the scenes were authentic without revealing too much—and the pressure to get it right was real.

"For me, it didn't matter who wrote the script or who's behind the scenes," she says. "I'm the face of it, and I practice, so of course for me that was a big deal because I'm not yet initiated. I wanted to make sure that everything that I did was within reason, [and] wasn't anything that was going to compromise sacred protocols or rituals that we do. It was really important to me that we only show things that could be accessible to anyone—but also done right."

Being introduced to Lulu on She's Gotta Have It is a big deal, as we don't see the spiritual practices of the diaspora depicted accurately on TV often—if not at all. So in the wake of the show being renewed for a second season, we had to learn more.

For the curious, Benitez breaks down what you need to know before practicing Lucumí with us below.

"Ceremonies, initiations, ebos (offerings, large or small) will cost you. If it requires time and effort or even food, flowers, animals, etc., expect to pay for it. Granted, some priests take advantage of others and will charge crazy fees, but there are many out there who don't.

It's also important to keep in mind that when a priestess/priest provides you a reading, that requires their energy and ashe. The outcome of the reading also often leads to the priestess/priest working on finding follow up solutions for their client; it's an exchange that should be rewarded to keep that balance."

2.It takes time to find the right elder in the tradition who will teach you what you need to know and help you navigate Ocha/Ifa.

"We call them godparents. Spend time with them, learn who they are as a people outside of the practice. A godparent-godchild relationship is supposed to be one for life; be careful about making a major decision about who you align your spiritual path with before spending quality time to understand who they are. You should only connect with who feels right, not who feels forced."

3.Egun (ancestors) are your first line of defense.

"They live in you and they want you to succeed. It's true that we all also have problematic Egun and it's our duty to give them light. That sometimes looks like working in the present to right the wrongs from the past. It's also something as fundamental and accessible as setting up an altar in your home to honor them. A sacred space you hold and keep for only them. You can leave plates of their favorite meals, coffee, liquor, wine, a candle, fresh water, etc. Sometimes they'll tell you want they want. :-)

Sometimes, just sitting at your altar and meditating on whatever it is you need to meditate on can be very impactful."

"It's not always honey baths and flowers—it does get messy. You'll sometimes find yourself in random places or looking for things that seem impossible to find. You'll help out your ilé with ceremony preparations, Ocha birthdays, feasts days, Bembes, etc. You'l have to pull up your sleeves a lot, but you'll gladly do it when you understand the results."

5.It’s okay to celebrate and practice our traditions openly.

"We are not forced to hide our traditions or what runs through our blood like our Egun once were. It's our birthright to find our path and be clear about how and why we are here. Our traditions are STUNNING and too beautiful to not show off."

6.But, some things remain private.

"Lulu's scenes in SGHI were accurate, but may have appeared watered down to some keen practitioners. We showed just enough of the reading and bath without compromising the sacredness of how it's done in real life. That was very important to myself, the Yoruba priestess consultant (Obatala, 20 years) and Spike. We knew we HAD to get it right."

7.F*ck the patriarchy—especially in practice.

"Although some practitioners in the past and in the present perpetuate a patriarchal environment, women and feminine energies are paramount to Orisha worship. Please understand that this tradition is very much a place for women to thrive and grow and be empowered. In fact, women are required."

8.It takes years, and more than initiation to learn to divine.

"Not everyone is born with the gift in the first place, and crowning won't make you a master. Even after some years in, I am still such a baby at this, and am constantly learning from my godfather (Priest of Yemaya, 18 years). He is amazing with the diloggun and I will be learning from him."

9.It’s okay to ask questions and learn why we do what we do.

"If this is something you truly feel pulled towards, there's a reason for that—you're magnetized to it for a reason and you owe it to yourself to have clarity. The right elders and potential godparents won't take curiosity as a sign of disrespect."

10.Practicing won't be a quick fix.

"Practicing these traditions is very powerful and certainly life changing, but it's important to know that it's not an instant fix on life. Nothing in life works that way. It will take 'spiritual work' and will happen on the Universe's time."