8 Reasons Why We're Looking Forward to Season 2 of 'Insecure' 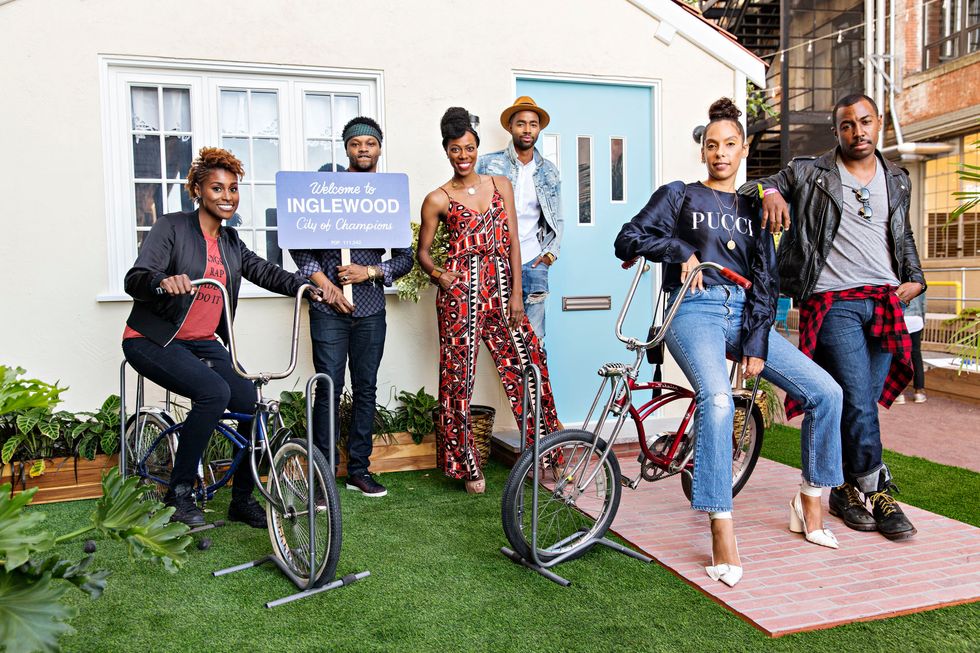 Issa Rae's 'Insecure' returns to HBO July 23—and we have tons of questions and plenty of predictions about what's to come.

Season one of Insecure ended way too soon for me. I was all up in the plot and characters: Issa’s infidelity, Molly’s thirsty dating patterns, Lawrence’s laziness. Right when everyone’s drama was coming to a climactic close, the season ended (after eight 30 minute episodes! Come on, sista Issa) and I was left with several thoughts about the character’s decisions and actions.

I admit that I was so wrapped up in this story because some of it mirrored my life. I too, was facing challenges in my long term relationship, could relate to what it felt like being one of few black women in the workplace, and understood the insecurity of being unemployed. Many of us appreciate Insecure because it illustrates universal truths about adulthood in comedic and honest ways.

The first season, although wildly entertaining, left me with several unanswered questions and hopes and desires for season two, dropping July 23. But that's a sign of a good show, especially a new one: the fact that we’re still talking about the finale shows that it's left an imprint on our minds and hearts.

Take a look at eight questions and predictions for season two of Insecure below:

Issa and Lawrence are broken up. I wasn't surprised that the season ended this way, considering everything that happened in between. Although I have conflicting thoughts about their relationship, I must admit—I'm looking forward to meeting single lady Issa.

There’s so much for the writers to explore now that she isn't in a relationship, especially since both she and Molly will be single now. I see this going many different ways: maybe after some months of healing, she accepts that she and Lawrence aren’t meant to be together (right now?), or perhaps she tries to win him back. Maybe she begins exploring the imperfect yet irresistible world of dating, or she finds fulfillment and empowerment through self love (my personal fave).

The last scene of “Broken as F**K” shows Issa and Molly sitting on The Couch in front of Issa’s apartment (I capitalized The Couch because it was symbolic and foreboding, transcending the role of a typical prop—it almost felt like another character). To end the season with a shot of the two friends sends the message that their love, their bond, is the true essence of the show.

I wonder how their friendship will be now that Issa has exited a long term relationship. Will Molly and Issa grow closer? Will Issa develop some unhealthy codependency habits with Molly because she's feeling especially vulnerable right now (we’ve all been there post-break up)? Or maybe they will online double date together! Now that would be fun to watch.

3. Is Daniel coming back?

I didn't believe that Daniel wanted a relationship with Issa, and the chances of them getting together are even slimmer now since she played him at the fundraiser. But I did enjoy looking at his face and body, and maybe there is more to explore with his character. For one, he is a music producer/engineer. Which leads to my next thought—

4. Will Issa explore her talents and career?

Yo, Issa can rap. Wouldn't it be dope if the storyline took a wild turn? What if she becomes this amazing hip hop artist and she gets all the men and all the moneys and she and Molly take over the world? They'd have to change the title of the show from Insecure to Inspired.

Fantasies aside, it's clear that she was unhappy at her job. In the pre-finale, her boss tells her she's proud of the ambition and effort Issa's been showing lately. Her words gave the impression that all Issa had to do was revision her life and circumstances, and things would be okay. But I'd like them to take that idea a step further and show Issa put that same drive and creativity into taking a leap in her career.

5. Will Molly go to therapy?

Molly and Issa got into a fight last season that was sparked by Issa's implication that Molly go to therapy. I'd be interested in seeing therapy worked into the storyline next season, especially because there aren't many positive representations of mental health care in the black community on television.

6. What about Lawrence and Tasha?

Lawrence damn near broke Tasha at the end of “Broken as F**k.” It seemed like a moment of frustration and enjoyment he needed to experience post-break up, but maybe the writers are working on something deeper between he and Tasha.

7. What about Issa’s friends?

Issa, Molly, Tiffany and Kelli went on a turn-up trip in the finale, and we got the chance to learn more about the four of them as a unit. I’d like to see more dimensional sides of Tiffany, Kelli and even Frieda—Issa’s good-intentioned coworker—who has come quite a long way since the early episodes.

8. What will happen to Issa and Lawrence?

It's the question that's on everyone's minds, and I've read many a think piece on their relationship to know that we all have our opinions about the failed lovers. Whether you’re #TeamIssa or #TeamLawrence, you’re coming back next season to see the next chapter of their story—together or apart.

We’ve seen their storyline before, but this time, the shoe is on a different person’s foot. Issa Rae told EW that she wanted to write a story about a woman who cheats, despite the warnings she received that viewers would find that character unlikeable. I find the storyline more compelling because Issa cheated—although I didn’t agree with her actions—because it makes her character feel human, imperfect and flawed, in ways that we don’t allow women to be.

It would be lovely to watch Lawrence and Issa somehow find their way back to each other, because, let’s face it—we are so used to seeing that on television. But it would be far more intriguing if Issa and Lawrence (Lissa? Isrence?) are done for good, and Issa finds someone or something new. Rarely do we see protagonists end up with someone other than the first lover we are introduced to, and that causes us to become attached to the first relationship we see them in. But I get the sense Insecure wants to be a little more complex and daring. After all, real life is unpredictable in that same way. Sometimes a new flame is the one that burns the brightest.