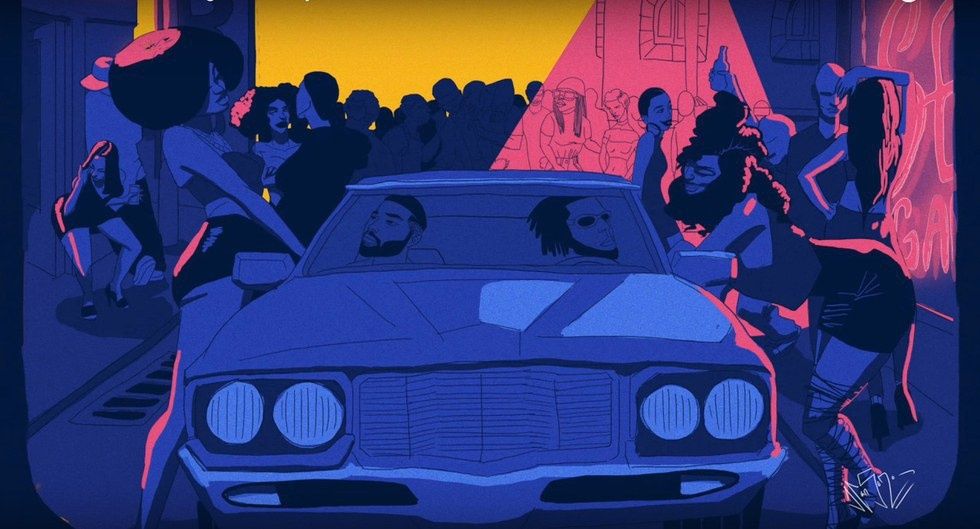 As everything in the music world seems to move towards streaming, the importance and weight of music videos only gets bigger.

2017 saw a long list of artists across Africa and its diaspora share some incredible music videos. Some acts looked towards their background to deliver new takes on their roots, while others broke the mold completely, presenting a visual aesthetic that felt wholly fresh and new.

Buzzing Somali-Swedish singer Cherrie dropped the amazing video for "163 För Evigt" ("163 Forever"), which despite her singing in Swedish, blew up online on both sides of the Atlantic, being posted in several Instagrams, Tweets and everything in between. "163" is the area code for Rinkeby, the largely immigrant populated Stockholm suburb where Cherrie grew up. Throughout the video, she reps Somalia hard—just take a look at the Somali flag waving proudly throughout the whole video or the very first line of the song in which she shouts out Mogadishu. —Kam Tambini

Grammy Award-winning Malian singer Oumou Sangaré teams up with South African director and fashion photographer Chris Saunders in the surreal music video for "Kamelemba." The video features members from the Swaggers dance crew, set before a gloomy, futuristic landscape. The director has mentioned that their performance is meant to portray a varied interpretation of afrofuturism and modern beauty. "The video references traditionally masculine performance cultures, like the competition of the Congolese Sapeur, portrayed here by a group of women in a gender-free setting," said Saunders. —Damola Durosomo

"Gwarn" is the ultra-smooth afrobeats collaboration from British-Ghanaian producer Juls and Nigerian star Burna Boy. It's music video follows an animated Juls and Burna as they serenade their girls in through several hilarious scenes. Watch them both lounge with their girls in this incredible Poka-directed video. —Kam Tambini

J Hus had a breakout year with his excellent debut album, Common Sense. In the music video for "Spirit," one of the release's standout tracks, the UK-Gambian MC heads to Jamestown, Ghana for a lively affair packed with motor bike swerving, boxing, fishing and loads of contagious energy. —Kam Tambini

Yemi Alade's video for "Charliee" is simply a joy to watch. The Paul Gambit-directed clip is a bright and vibrant deep-dive into the sweet pop sound and aesthetic of this Nigerian diva. Yemi had a good year marked by the recent release of her highly-anticipated third album, Black Magic. Even more so, her old video for "Johnny" became the most watched Nigerian video on Youtube ever earlier this year. —Kam Tambini

Kelela serves all kinds of looks in her sultry music video for "LMK." The energetic video begins with the Ethiopian-American singer offering chic, 90s "it-girl" looks as she enters a packed club in a shiny blonde wig and statement frames. She then dons fiery red tresses for a dance number in a flashing hallway, before switching back to her signature locs during an all-white party. It's all major hair and style inspiration in just under four minutes. —Damola Durosomo

The highly-buzzing young rapper MHD celebrates his roots by making West African-inspired "Afro Trap" music—an eclectic mix of hip-hop and afro-pop styles that's gone viral. The French rapper of Guinean and Senegalese descent has sparked an "Afro Trap" phenomenon in the past few years, with each one of his songs and its accompanying videos typically gaining tens of millions of views when he uploads them to Youtube. MHD continued his impressive Afro Trap series with Part 9, which follows the young rapper flanked by two amazing kid dancers and some goofy CGI effects across the streets of Paris. —Kam Tambini

Olamide's video for "Love No Go Die" is the perfect meeting of animation and Nigerian pop music. The video, which was produced by the YBNL Toons, begins with Olamide's 3D avatar, in his signature black shades, lovingly staring at a girl in a hospital bed. The segment then cuts to better times—a flashback of the two animated characters playing video games. Their gaming session soon escalates as they start getting more intimate, while a larger-than-life portrait of Olamide hanging in the background looks on. Everything then turns to a spy-meets-Casino Royale ordeal. There are levels to this thing. —Jacqueline Traoré

When Wizkid dropped an alternate music video for his Drake-assisted hit "Come Closer," we have to say, we enjoyed it much more than the first. The video—directed by the acclaimed video director and husband of Solange Knowles, Alan Ferguson—sees Wizkid and some stylish friends at a dreamy summer get-together, brimming with rich color, bold fashion, and gorgeous melanin. The 3 and-a-half minute music video boasts features from Khoudia Diop (aka Melanin Goddess) , and even Davido's reported ex-girlfirend Sira Kante, who plays Wizkid's love interest. With its fun dance numbers and vintage Malik Sidibé vibes, the video is a visual stunner that had us wondering why Starboy didn't just drop this version in the first place. —Damola Durosomo