We spoke to Africans in New Zealand about their reactions to the Christchurch attack.

Just over a week ago, Samantha Kutesera was scrolling through her Facebook feed like many of us do on a daily basis. She was catching up on news and liking a few posts here and there —nothing out of the ordinary—when she came across the news that there had been a mass shooting in two Christchurch mosques. Kutesera, who relocated to New Zealand from South Africa when she was just 7-years-old and has lived there for 16 years, was shocked and angered but not surprised. "This is what happens when we give all those people who discriminate against others and troll on the internet, without consequences, a gun," she says.

On March 15th, Australian-born Brenton Tarrant, who was armed with a semi-automatic rifle, shot and killed 49 Muslims during their prayer session. Among the deceased were women, men, children and even a toddler as young as 3-years-old. Even worse, Tarrant live-streamed his terrorist attack for all to see.

While the Christchurch shooting was horrific and unimaginable, discriminatory and racist attitudes are not uncommon in New Zealand. According to Kutesera, "Casual racism, blatant racism and intolerant attitudes are very much alive here. Some experience this more than others, but everyone has a story. A story that is usually ignored."

Most people are afraid of what they really don't know and understand says Kutesera. Ordinary Muslims especially, have been painted with the same brush used on jihadists, terrorists and extreme Islamists. "With all that has been going on in the world people in most countries have been associating the actions of terrorists and extremists with all Muslims. New Zealand included. Especially those who hold white supremacist and racist views," she adds.

African Communities Forum Incorporated (ACOFI), which is a community of Africans who are part of the broader diaspora, issued a statement where they expressed their grief and condemned the tragic loss of life, especially in a place of worship. They also commented on how encouraging it was to see the overwhelming response to the terrorist attack as well as support from the global community. In a message to their fellow Africans in New Zealand they added, "We know this is a tough time. ACOFI is here for you. If you are concerned about whānau (family) and friends in Christchurch or just feel shaken, please contact us. We will get you help."

In the wake of the attack, ACOFI posted updates on their social media platforms of Africans who had been confirmed dead and of those they were waiting for information on. Three adult Somalis and a child as well as two Ethiopians were killed in the attack. A Somali man who was travelling to support his community after the attack, died in a car accident. The organization subsequently held a vigil for all the victims involved and their families. 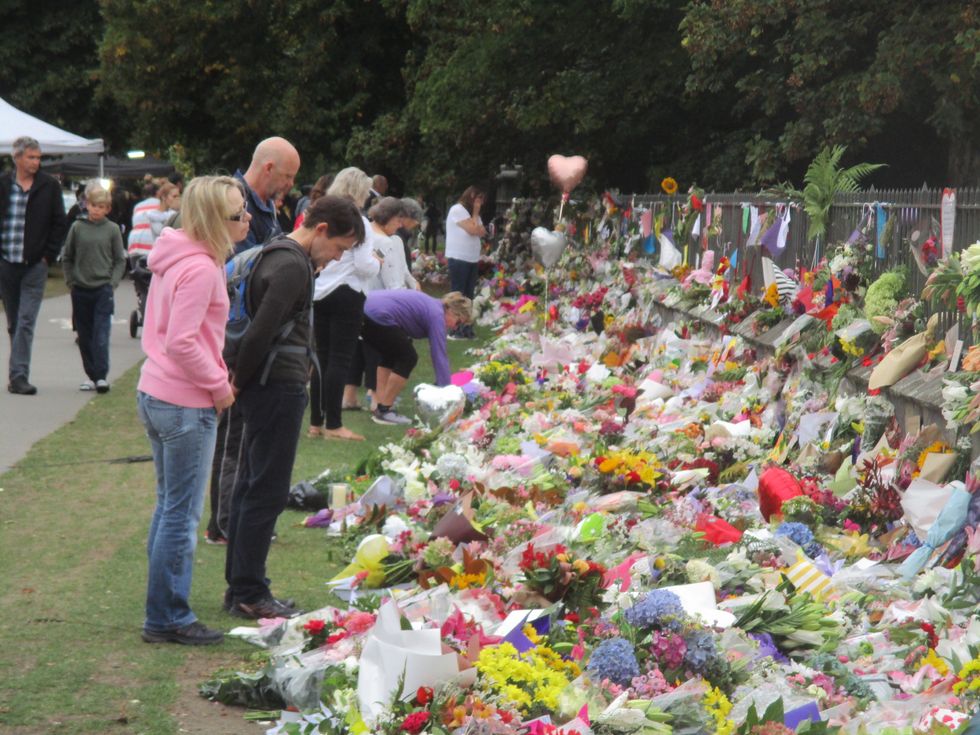 Members of the public lay flowers down for victims.Via Wikimedia Commons

While many have been quick to highlight the act of terrorism as "not New Zealand," members of ACOFI disagree. According to them, Tarrant's callous actions are the result of extremist far-right views being allowed to be propagated with reckless, and now lethal, abandon. Kutesera believes that Tarrant was simply a manifestation of what happens when the voices of the people who are being discriminated against are repeatedly not being heard or taken seriously. She adds, "This white-supremacist terror attack was a manifestation of allowing this. Of not listening to people who are being discriminated against and taking them serious or holding them at the same level of respect and importance as everyone else."

In the run-up to the mass shooting, Tarrant was able to express blatant hatred on social media platforms like Twitter, posting several links to his hate-filled manifesto and writing about his reverence for white nationalist terrorists like Anders Breivik. Tarrant's narrative of white victimhood sees "white survival" hinging on the targeting of Brown and Black immigrants. As if that weren't enough Tarrant even likens himself to the anti-Apartheid struggle veteran, Nelson Mandela, who fought for the liberation of Black South Africans.

Shortly after the terrorist attack, the Prime Minister of New Zealand, Jacinda Ardern, announced that the country's gun laws would be changing. Following her announcement, assault rifles and military-style automatic firearms were banned entirely. Echoing the belief of many New Zealanders since the attacks, Kutesera believes that the only use for semi-automatic weapons is to kill people. "There is no need for semi-automatic weapons in this country," she says. "Only the military or police should have access to these weapons."

When asked about what needs to drastically change in New Zealand from preventing anyone else from being victimized, Kutesera says the answer, or at least part of it, lies in the world listening to the stories of intolerance and discrimination of so many as well as speaking out against the perpetrators. "The biggest lesson and way to move forward is hold people to account of the words and actions," she says. "Letting these things slide has given birth to these terrorists."

Togo's electoral commission has just released the preliminary results of the first round of the presidential election.

Former South African president F.W. de Klerk has stirred controversy after he made claims that "Apartheid was not a crime against humanity".

The former statesman made the comments during a number of interviews held amid events last week which were commemorating the 30th anniversary of Nelson Mandela's release from prison.