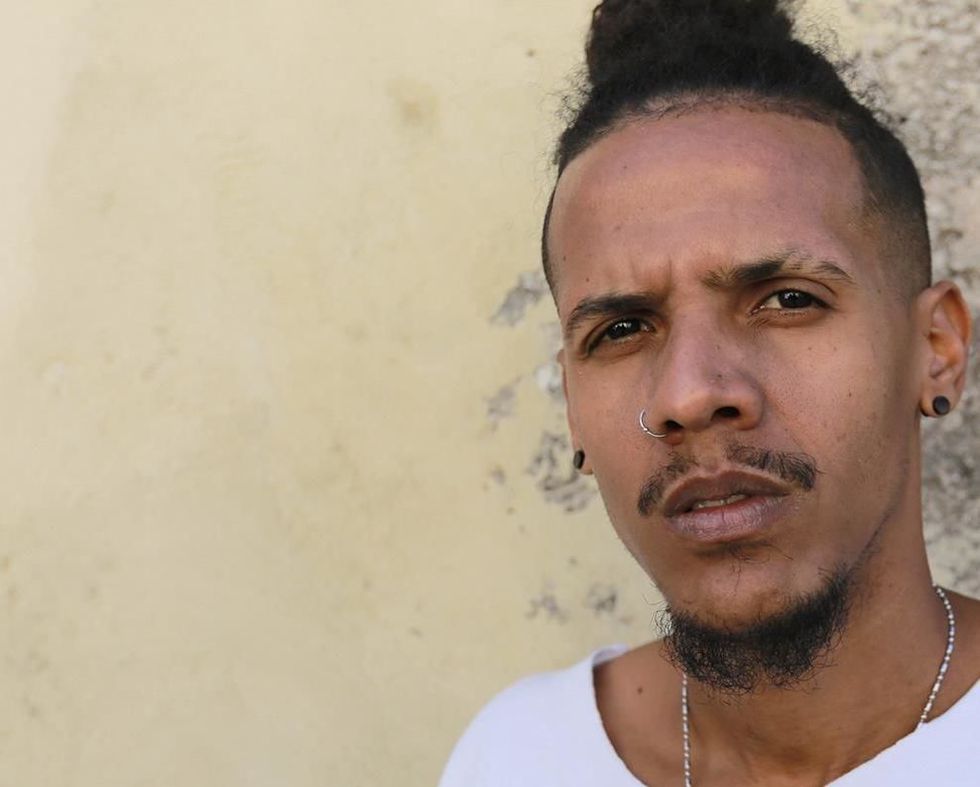 The new compilation, AfroRazones, is a much-needed Afro-Cuban response to the cultural trends connecting the diaspora today.

The new compilation, AfroRazones, is a much-needed Afro-Cuban response to the cultural trends connecting the diaspora today.

AfroRazones is the brainchild of Luna Olavarria, a student at New York’s New School, and DJ Jigue, founder and director of Guampara Productions, Cuba’s first independent urban music label. The album, which features rap, R&B, and spoken word, comes out as an element in a larger archival project that attempts to showcase Afro-Cuban identity expression as part of ‘a global black resistance.’

An inheritor of the golden era of conscious Afro-Cuban rap (1995-2004), AfroRazones also aligns itself with what has been called The New Afro-Cuban Movement; the recent presence of several antiracist activists and organisations in Cuba’s public sphere after recent understanding of the delicate future of race relations in post-socialist Cuba.

In the lyrics and the music of "Mi Raza" by El Individuo, one can clearly sense the vision US-Cuba team uses to rewire the consciousness of blacks in the island with that of the rest of the African diaspora. El Individuo symbolically draws on power from the legacy of Afro-Cuban and African-American freedom fighters:

Clever mixes of the Afro-Cuban musical heritage with some of the current flavours of urban music are a definite update to the scene of emerging black Cuban music from both Santiago de Cuba and Havana. This album is a jewel that challenges Cuba’s regurgitation of salsa, timba and the dominance of local and international reggaeton, by asking and answering rather successfully: ‘how can black Cuban music be new again?’

It's very refreshing to witness DJ Jigue’s growth as producer and label head. For this effort, Guampara Productions curated music from local beats strongmen DJ LPZ, DJ Drew, Kamerun and Jigue himself. Here are some of my personal favourites:

Kamerun’s "El Viento" (The Wind), a chanted-rap prayer to Oya, the Yoruba deity of rebirth, the lightning bolt and the hurricane. Kamerun has mixed the strength of a contemporary Hiphop beat with his skills a trained vocalist to mesmerizing results.

"Remember" by Havana’s local Mutila and DJ LPZ is a song with an incredibly eclectic Havana rap style. Mutila did his homework studying the greats of the golden era of Afro-Cuban rap. "Remember," in this album, is that track that follows on the steps of what I would call a male, ‘Afro-Cuban hip-hop standard.’

Also from Havana and with formidable power, female rap duo La Reyna y La Real are featured with their badass "Si No Te Gusta OK" (If You Don't Like It OK). This is what La Reyna had to say about their track:

"I found inspiration in my experience of racism growing up Here [in Cuba], people always say there’s no racism, but as a black woman, I have been a victim of it myself. It doesn’t happen as much anymore, though […]. I don’t get it. [As black people] we are criticized, we are told we must be better, we should study more, because we have less privileges. This album is necessary."

I asked her to tell me how discrimination is different now and what has changed. "Well, I used to cry, but I don’t take it the same way any longer. Now I know how to defend myself. This song is one of my replies to racism: I’ll keep my head up/ those who mean me harm will be pushed out of the way/ if they don’t like it, then next time they’ll know what to do. La Reyna is very clear that their music will help other black youth in Cuba who are not yet woke to the realities of local racial discrimination.

R&B meets Cuban filin and nueva trova in Sigrid’s "Iyami." Sigrid has taken her healing chorus from one of the Yoruba oriki for Oshun, the orisha of love and sweet waters. Iyami also refers to the primordial mothers and the divine feminine.

Solo Dios sabe porque me hizo asi/ Y yo correspondo cada mañana al mirar al sol/ (Only God knows why he made me this way. Every morning, when I look at the sun I acknowledge [her] will)

I must agree with Eli Fantauzzi (of Fist Up), who did the photography for AfroRazones; this song is a diamond. But like I said earlier, so is the whole album. It would be incredible if she had the opportunity to produce a whole album in this style.

Production-wise, beyond the great choice of beats, the live drumming gives every record the Afro-Cuban accent DJ Jigue and Olavarria’s team wanted. However, I would have loved to hear the congas integrated into the beats themselves.

At times, the drumming presents itself as a remote layer in some of the songs. But this is so minor, AfroRazones comes with strong recommendations from critics and the press. Anyone looking to be up on the latest Afro-Cuban or Afro-Latino music should look no further.