Black Is Viral: What You Missed At Afrofuturism 2016 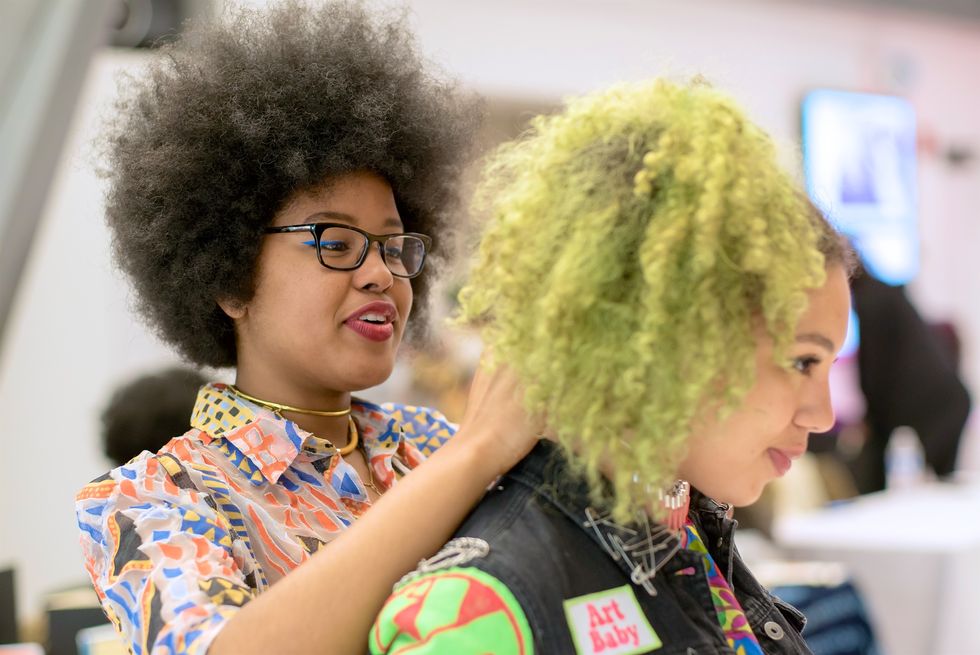 This year’s Afrofuturism conference—April 29-May 1—at the New School in New York City, explored the virality of blackness with a cutting-edge mix of artists, and scholars exploring how Afrofuturism relates to the liberation of black people and people of color.

The sound collage is set to the experimental, futuristic r&b sounds of artist, Norvis Jr.; this audio is part explainer-part pontification on the term “Afrofuturism.” It also explores the ongoing phenomenon of this year’s Afrofuturism conference: “#BlackIsViral.”

We first hear from New School senior and multimedia producer, Ladin Awadwho was principal organizer of the conference. Awad played a key role in creating the programming for the weekend and in selecting the participants for panels and workshops.

Then Yarminiah Rosa, co-founder of Purpose Rosa (a jewelry line made of re-purposed materials) discusses how Afrofuturism is “a state of mind,” and that it is the “audacity for brown lives to imagine a future that isn’t necessarily secured for us.” Sudanese poet, Safia Elhillo, who was on the panel “Screaming into the Void: A Conversation on Presence and Erasure In Contemporary Black Writing,” says that Afrofuturism is to “conceive of a world where you don’t have to tell people black lives matter.”

Gabriel Teodros, an Ethiopian-American hiphop artist who co-facilitated a panel with Selam Bekele on Ethiopian Surrealism, pushes back on the term and suggests Afrofuturism is more of a label that has been placed on something black people throughout the world have been doing “forever.” We also hear a clip from Daniel Mekonnen’s magical saxophone.

New School seniors and filmmakers, Yeelen Cohen andJazmin Jones who co-curated the Afrofuturism film festival and the video installation, “By Any Memes Necessary,” question what it means to be black and viral in the digital age. Their video installation which consisted of viral short videos made “by black people for black people” was an attempt to make the conference more accessible, and by bringing such viral videos out of context, into a public space; they argue, is a new way to create community.

Finally ruth gebreyesus, who moderated the panel, “Black Technologies of Affirmation and Resistance,” spoke about the online exploitation that can happen to black people, while also recognizing the “ingenuity of black folks” in spaces that were never built for them in the first place.

Inye Nosegbe, a New School senior and designer, created the stunning visuals and branding for this year’s entirely student run effort. Writer ruth gebreyesus sums of this year’s theme as: “To be black is to be black and viral is to be remarkable. To be infectious and influential in spaces never designed for black, queer, immigrant, low-income voices, is a testament to the ingenuity of black folks.”

Last year's conference created a space in which people could be in conversation with one another dissecting and understanding Afrofuturism as potentially integral to new narratives of the African Diaspora. This year’s conference was taking it a step further; celebrating blackness, while thinking of new ways to protect, attribute and build from the beauty of black virality. There was an incredibly uplifting energy in each room celebrating black brilliance and creativity. There was also conscious community building: bringing those online spaces where so many of the panelists, featured artists, and attendees had communicated, were now meeting - some for the very first time - in the physical world.

The programming this year worked through a range of topics like; the impact of online black subcultures, the future of black movement making, commodification of the black image, black hyper visibility online, the importance of making space for marginalized and oppressed peoples, bodies and narratives.

Some of the titles of the workshops and panels were:

- Black Technologies of Affirmation and Resistance

- In Search for Black Time and Temporality

- Screaming into the Void: A Conversation on Presence and Erasure in Contemporary Black Writing

- Alone We Play: doxxing the kid

- How to Decolonize Your Heart

- Hotboxing in Cars with Boys: A Memoir

- My Vision Manifested: Pushing Past Fear + Getting What You Deserve

- Towards a Black Speculative Design Pedagogy

- The Impact of Black Subcultures in the Digital Age

- Hyper Visibility of the Black Image

The weekend also consisted of an Afrofuturist After Party during the after hours of Saturday Night. New School alum Kevin Ewing curated the event bringing in black artists like DJ Masc Error, Suzi Analogue, Don Christian and Tribe Indigo.

Shiva Bayat is a multimedia producer and researcher in New York City.
Alejandro Jaramillo is a visual anthropologist and media project manager based in Brooklyn. Follow him on Instagram and Twitter.
Popular
Culture
spotlight