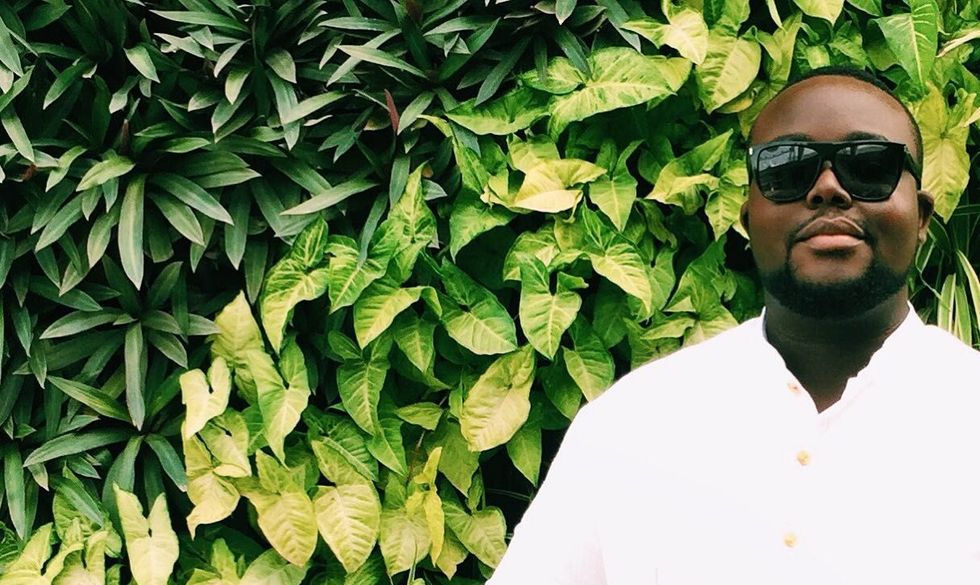 Ghanaian chef Fred Apaloo is serving up elaborate brunches at his Accra pop-ups. He’s part of a budding fine-dining scene in the Ghanaian capital that emphasizes international flavors.

With a growing number of Ghanaian professionals returning home from abroad, Accra’s food scene is in the midst of a revolution. Alongside newly launched restaurants—Tea Baa, Neem Grill and Café Kwae—Villa Grace, Apaloo’s boutique dining company, is leading the charge to help more Ghanaians rethink their relationship with food.

Villa Grace has quickly become one of Accra’s most exclusive and unique dining experiences. Through intimate pop-up brunches, the brand has gained a large following, selling out tables weeks in advance. And yet, despite the careful preparation that goes into each Villa Grace event, its creation happened almost by chance.

When Apaloo moved home from Miami in 2015 to spend more time with his mother, he spent much of his downtime experimenting in the kitchen and documenting his creations via Instagram. “As I posted the photos, I had a lot of people message me asking if I’d cook for them, so I started a series called ‘Brunch Friends,’” he says. “I’d lay out a spread every Saturday, and I’d plate it nicely as if we were in a restaurant in the comfort of my home.”

After two cousins encouraged him to create an Instagram page as a platform for a social media blog, he launched Villa Grace as a food photography project. The overwhelmingly positive response led him to develop a pop-up dining experience a few weeks later.

“I studied hospitality management and I have a background in hospitality and service, so the whole concept wasn’t brand new to me,” Apaloo tells Okayafrica. “In Miami, pop-ups are common, but they’re still a new concept in Accra. Our first brunch, the ‘Genesis’ brunch, featured six courses and went extremely well. After I saw the reviews, I realized I could really launch it into a concept.”

In West Africa, where the kitchen is often perceived as the domain of women, some might view Apaloo’s choice to branch into catering as unusual. He dismisses such comments with a laugh. According to him, “Skills aren’t gendered. You don’t have to be a man to be a doctor or a woman to cook. Culinary skills are about artistry and individual talent.”

Named after his beloved grandmother, Villa Grace celebrates her painstakingly meticulous approach to entertaining. Apaloo credits his appreciation for presentation, excellence, and natural ingredients to time spent following his grandmother around the kitchen and garden growing up. “I saw the love and the care she put into the food she made, and at a young age, I made the connection between effort and product when it comes to food,” he says.

For Apaloo, brunch is not just about food, but also an opportunity for friends and laughter.

Having lived in Miami, the land of boozy brunches, the self-described gastronomist keeps the champagne flowing at most events. Moët & Chandon, one of the world’s largest champagne houses, sponsored Villa Grace’s most recent pop-up, “Endless Summer by Fred Apaloo.”

Now, Villa Grace has over four public brunches under its belt, and a burgeoning clientele of private catering clients. Down the road, Apaloo sees additional room for growth. “The Villa Grace concept is ultimately a boutique restaurant – a home-away-from-home space with good food, good company, and good laughs. Our pop-up dining series is paving the road for that.”

While Villa Grace’s price tag ($80 to $100) may be out of the reach of most locals, Accra’s rapidly rising middle class may deem the luxury of experiential dining well worth the cost. As Ghana’s food industry continues to grow, Villa Grace is poised to take over and re-define fine dining, Africa-style.

Follow Villa Grace on Instagram to see some of Apaloo’s work and to learn more about upcoming events.