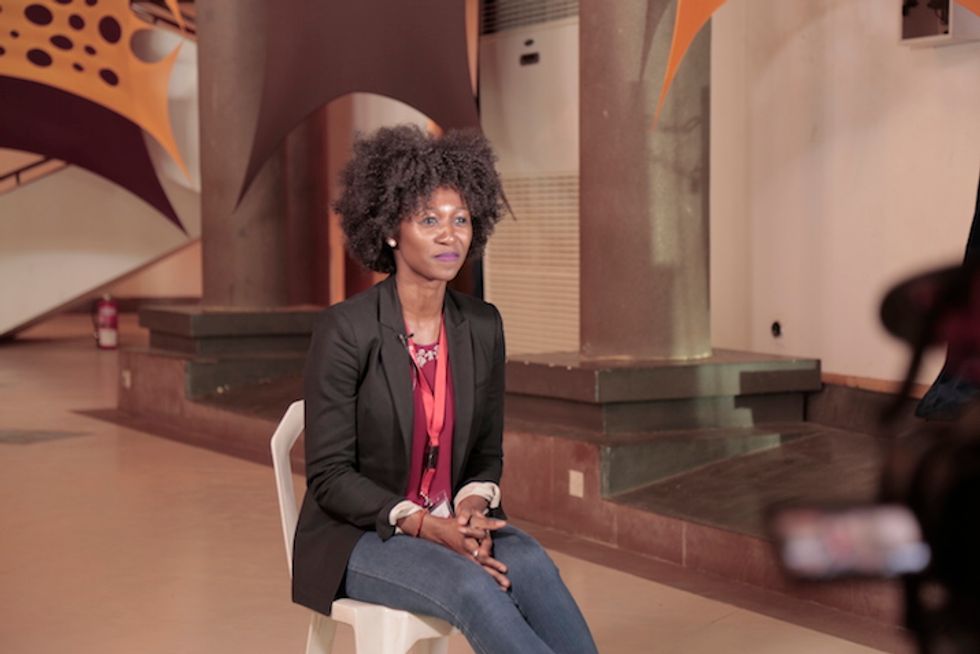 Last month, Nigerian and international writers, poets, artists, filmmakers, academics, authors and some of the world's greatest thinkers alike converged in Abeokuta, the largest city and capital of Ogun State in southwest Nigeria, for the third edition of the Ake Arts and Book Festival. Opening November 19, the festival featured a five-day program of cultural, artistic and literary events with the likes of Chris Abani, Mona Eltahawy, Nnedi Okorafor and Taiye Selasi.

Ainehi Edoro, founder and editor behind the African literary blog Brittle Paper, was invited to attend and participate in this year's festival. Below, Edoro shares her firsthand account from Nigeria's largest literary festival.

The moment the plane takes off from O'Hare international airport, I perform my cure-all ritual for anxiety. I read. Amitav Ghosh's Flood of Fire, the third and last installment of the amazing Ibis Trilogy was decided upon months in advance. Nothing can take my mind off the claustrophobia of economy cabins like an epic tale about opium, British gunboats, and 19th century Guangzhou.

Yay! I make it to Lagos.

I am the woman with the crazy hair reading her way through the immigration cue at Murtala Mohammad Airport.

It's a sea of people at the one functioning baggage carousel. I let out a kooky yelp when—an hour later—I sight my massive grey suitcase trundling down the carousel.

Lagos is a gust of hot air. My nose tingles from air smelling of cologne, sweat, and petrol. I am immediately lost in the chaos of smells, sounds, and bodies.

“I don reach Lagos!" I text my friends.

I wake up suddenly to an owl squealing by my window. Can't fall back asleep.

I facetime with my husband and 6 month old daughter. Everything is good on the home front.

Sleep eludes me, so I read The Flood of Fire some more until the sounds of cocks crowing and of a Benin woman belting out gospel songs tell me it is dawn.

Out and about town. It takes only a couple of hours of being stuck in Lagos traffic to get me high on petrol fumes. But the cab driver is playing Hausa remixes of Bollywood classics, so it's all good.

In a Danfo—the ubiquitous yellow buses in Lagos that inspired the alien spaceship in Nnedi Okorafor's novel Lagoon. In the novel it's called “the Devil's Danfo"—with good reason, as I quickly find out.

Ideally, I should be scared for my life. The driver is heading down a one-way express lane in the opposite direction.

But I'm busy itemizing the reasons why it would be near impossible to read while commuting in a Danfo: The heat inside the bus is so intense it could set the book afire, otherwise, the reader is perspiring so much that the book is drowned in sweat. The bus is a metal skeleton of loose parts. Can't imagine reading through all that clangor. Balancing the book would also be tricky in an overcrowded bus listing violently from side to side. So much for Lagos as a literary city!

My pre-Ake exploration of Lagos is over.

It is dark by the time I join the Ake Festival convoy at the airport.

It's pretty surreal to be riding off into the night on the bus with all these really cool people, some of whom I know but have never met: Wanjeri Gakuru of Kwani Trust, Novuyo Rosa Tshuma, Katie Haines, Bisi Alimi and other super-awesome invitees.

I am sitting next to Adeola Fayehun of Sahara Reporters—one of my all-time female crushes. It's get better. Hearing her talk passionately about Nigeria is restoring my faith in humanity.

When we arrive at Abeokuta, it is too late to get any sense of the city, but the soothing night breeze gives me a good feeling.

We are ushered into a hotel that looks like the set of Mad Men. But I'm way too sleepy to take in all the swankiness of the brightly colored hallways and 1960s inspired furniture.

It's the last day off before the festival begins proper. The morning has been reserved for visiting secondary schools. Lola Shoneyin addresses us before we set out. Inspire them to become readers, she says. That's how to break the cycle of bad political values ingrained in our communities.

I'm in the same group with Kenyan fantasy writer Mehul Gohil who is also an Africa 39 alumni. Also in our group is Ugandan poet Gloria Kiconco. We've been assigned a Baptist girl's school.

A large assembly of neatly uniformed schoolgirls welcome us with a roaring “good morning." We introduce ourselves. Kiconco gives a beautiful spoken word presentation. The students break out in a million applauses. I'm thinking to myself that now that we've made such a good impression, we can now begin the grand literary indoctrination we've been sent to do. The literature teacher corners me as I walk to the stage. The students have something quite different planned.

A cast of students between ages 11 and 14 are lining up. I soon realize that they are about to present a play. It's titled A Drop of Bile and directed by the English Teacher Mrs. Ojo.

Students from the Baptist girls school act in a play (Credit: Afrodisiacbay)

We are being treated to a full-blown literary extravaganza, and I am simply blown away. A student is reciting Birago Diop's “Viaticum." This student can't be more than fourteen. She is delivering Diop's classic poem with precise gestures and a nicely cadenced elocution. She isn't just acting. She gets the poem, the power of its incantatory verses. I all but lose my mind.

So much of the visit has not gone the way I imagined—and thankfully so. I thought I was here to give a group of minors a pep talk on cultivating a love for reading. Was I humbled! I've never seen a group of young girls this literary and passionate about ideas. Feeling inspired.

The day is speeding off to an end. We make a quick stop at Olumo Rock. According to our lovely guide, Kazeem, nearly 200 years ago, a group of villagers escape war to settle in the dark caves of this rock formation. The city of Abeokuta—which means “under the rock"—is the outcome of this determined search for survival. Five rooms were built in the interior of the caves to house the runaways. I can't believe we are squatting before the only remaining one of the five. The room is small, possibly 5 feet x five feet and the door is so small it looks like it opens into a dollhouse. I feel blessed to be granted this rare access into the intimate lives of our ancestors.

The day ends by the pool with Zukiswa Wanner, James Murua, Obinna Udenwe and chilled bottles of Gulder.

It's the first day of the festival, and the excitement is palpable. Novelists, poets, artists, bloggers, academics, publishers, corporate representatives, politicians are all gathered to think one thing and one thing only—African literature. The feeling that Ake Art and Book Festival represents something remarkably new in the global literary landscape is overwhelming.

The opening ceremony is in full swing. A string of speeches is punctuated by stirring performances by Efe Paul Azino, Qudus Onikeku and Aduke.

The show is finally on. I'm sitting on stage with E. C. Osondu, Chris Abani, and Taiye Selasi about to moderate a session titled “Call and Response: African Writers Writing Back."

We begin the conversation exploring Africa as a spatial imaginary in fiction. The chemistry among the panelists is great. Conversations quickly shift to questions about identity.

I listen to each of the panelists speak, and it strikes me that precisely because Africa—as an idea and as a form of identity—is so highly contested, it means so many different things to different people. The beauty of this fact is demonstrated in the response of each panelist.

Selasi shares her now familiar position that since everything—countries, Africa, etc—is invented, we should let our private experiences define us not—what she claims are—dubious political monoliths like Africanness and so on. For Chris Abani, it isn't so much “let's do away with categories" as it is critiquing our attitude towards cultural and political identities. It is not that identities are outdated and superfluous but that we need to stop using things like “Africanness" as grounds for exclusion and for fostering a culture of intolerance. E. C. Osondu ties things up nicely by insisting that as problematic, complicated, evolving as terms such as “African" may be, there is a need to preserve something of them. He has no qualm whatsoever thinking of himself and his work as African.

The panel is soon over. My stomach is screeching for food. But I'm being waylaid for interviews. As a literary blogger, I live for African literature and love talking about it, so I'm having fun chatting with interviewers in spite of the biting hunger.

I finally make it to the green room where I wolf down a plate of Ofada rice.

Side note: I've developed a bit of an obsession with this heaven of intense peppery goodness wrapped in green leaf. You have Bisi Alimi to blame! He got me hooked even though I have to admit that I don't eat it with half the suave he does—he eats it with his bare fingers.

Time to moderate a panel with Igoni Barrett and Nnedi Okorafor and talk about fantasy and science fiction.

In their first set of responses, both authors redefine popular assumptions about fantasy. Fantasy is not illusion—a conception of life that is separate and secondary to reality. Fantasy is something that emerges organically out of reality. The gap between the two, they insist, is not as wide as we imagine.

We turn to Blackass—Barrett's new novel. It's a Lagos remix of Kafka's Metamorphosis. Taking Barrett for an ersatz Kafka, I pummel him with question I'd have loved to ask Kafka if he hadn't gotten sick and died in the 1920s. Barrett is kind and patiently answer my questions.

There is this character in Okorafor's alien encounter story Lagoon. He is a Ghanaian rapper, and his super-hero power is rhythm. I ask Okorafor what inspired such brilliant idea. She explains that there is something super-hero-ish about rappers being able to transform simple ideas into powerful messages.

I am having so much fun asking both authors to elaborate on a few really weird moments in their novels. Barrett explains why he includes “himself" as a character in the novel. Okorafor explains why, in the dedication of the novel, she defines “the people of Lagos" as animals, plants and spirits.

It's a wrap for me! The festival continues until Sunday, but I have a plane to catch that same night.

I'm outside thanking the amazing Lola Shoneyin for inviting me to the festival and telling her how great an experience I've had.

I say my goodbyes and begin my 30-hour journey to San Diego to present a paper at the African Studies Association Conference.

Ainehi Edoro is the editor of Brittle Paper, a literary blog for fans of African literature. She is a doctoral student at Duke University where she studies African and British novels. Her doctoral dissertation is a study of Africa's formal contributions to the novel. She lives in Chicago.