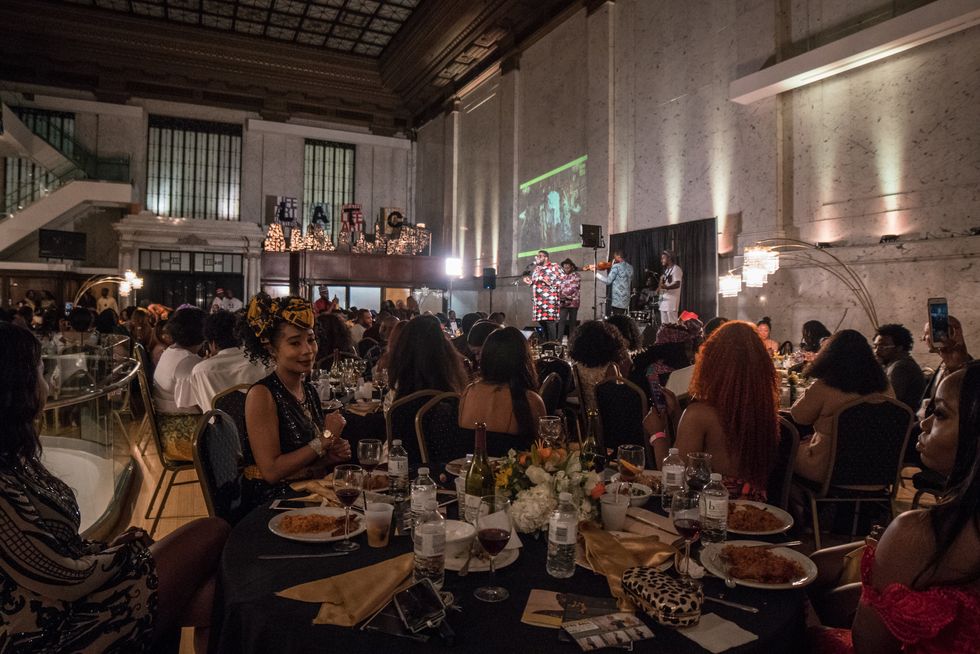 The awards event was a celebration of excellence and ambition in the African community.

On Saturday, May 19, the Los Angeles Theater Center in downtown LA became a mecca for idealists and dreamers from the African diaspora.

The casual passersby would've been greeted with an effusion of bold prints, intricate headwraps and color coordination—the likes of which had not been seen since their favorite 90s music video (or church, or a wedding for some of us). And though the festivities might have vaguely resembled a film set—as is all too common downtown—this moment wouldn't be rehashed months later in a movie or television show. Attendees were flocking to Amplify Africa's inaugural Afro Ball. With the support of BET International, Buzzfeed, OkayAfrica, the GEANCO Foundation and more, Afro Ball lived up to its name as a "for Africans, by Africans" awards event, celebrating excellence and ambition in our community.

The evening was hosted Seyi Brown, Justin Spio and Mame Adjei; featuring a special appearance from Congresswoman Karen Bass, who gave a thoughtful speech about the significant influence of African immigrants. Bass, who spoke from a low-lit podium at the center of the hall, detailed how African ingenuity and passion had enriched American culture and innovation throughout the years. The politician also touched on how African immigrants and first generation children are fighting dated and pervasive narratives that they come to America purely to exhaust its resources.

Arrivals began to trickle past the step and repeat into the venue around roughly 6:00 p.m. Guests included honorees such as Wondaland Records virtuoso Jidenna, stylist and philanthropist Ugo Mozie, entrepreneur Samuel Desalu, neurosurgeon Muri Raifu and tech guru Ori Ayonmike. Soon after, the audience settled into their assigned tables to watch Amplify Africa co-founder Damilare Kujembola deliver the evening's opening remarks. Kujembola's light-hearted speech was followed by the presentation of awards in the education and science categories. Guests were then treated to a special performance by Aizehi Nomo, who opened with renditions of "One Dance" and "Work" as waiters and waitresses replaced the salad course with hearty plates of jollof rice, chicken and plantain. Over dinner, attendees sipped wine and chatted before the evening again shifted tone to honor creatives like stylist Ade Samuel, director Daps, who is the man behind Migos' most popular videos, and OkayAfrica's own CEO and publisher, Abiola Oke.

The evening ended on a high note with a special performance from Wale Ojo, followed by an after-party where attendees could continue to dance the night away.

Take a closer look at Amplify Africa's inaugural Afro Ball in our slideshow below, with photography by Farah Sosa.