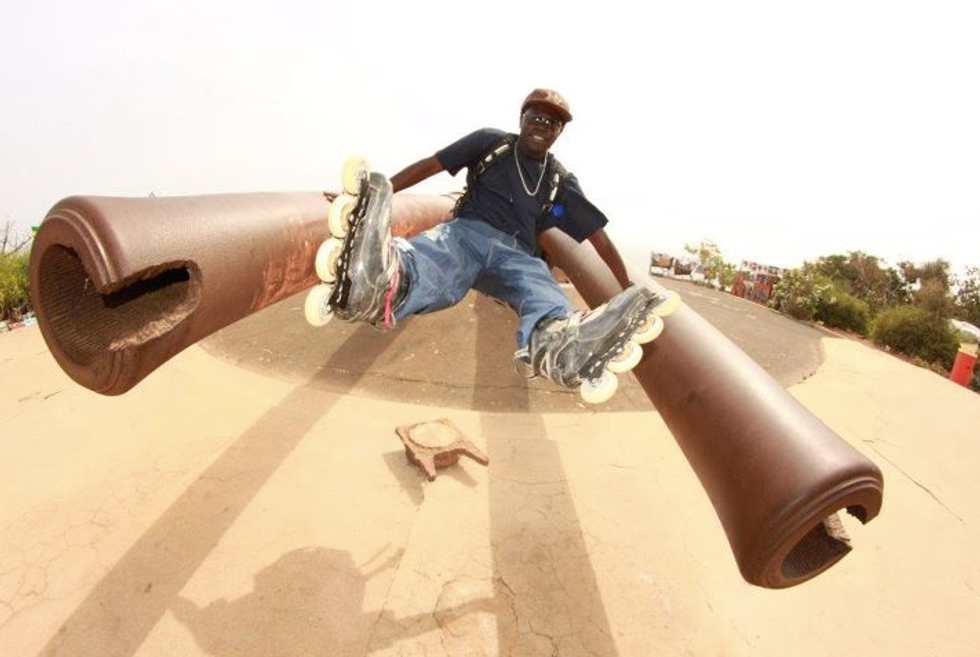 OKA contributor Kate Bomz takes "An African Minute" with DJ and global powerblader Oli Benet to ask him about the thriving skate scene in Dakar, Senegal.

Over a year ago a friend called me and told me that there was a group of skaters coming from Dakar to do a show in 'Parc de la Ciutadella' as part of a Dakar/Barcelona collaboration of culture. There was a meet the day before, and the skaters asked if I would join them. I arrived at this palace of a house in the centre of Barcelona, and found no-one related to the event. I was underdressed and considering leaving, feeling rather out of place. I decided to wait it out and how glad I am that I did. A group of Senegalese skaters entered this house with music playing, and all wearing their skates, bringing with them some great vibes and smiles, and we immediately started communicating with broken English on their part and broken French on my part. Their skating and story was inspiring, and their shows the next day were incredible.

2. You've mentioned you had fear due to ignorance & preconceived notions, how were those shattered upon your arrival in Dakar?

When I say preconceived notions I mean in the sense that I have been travelling for many years, and you learn to keep your head down and push on when people try to talk to you. Avoid eye contact and mind your own business. Dakar was full of people trying to talk to you all the time, and at first I just did the whole “Avoid everyone and march on” technique. However, the Senegalese skaters with me were very friendly to everyone. At first I thought that they must all be friends, but when Eli Manel told me that everyone should be nice to everyone always in this life, I realized that many of the people were being far more welcoming than I had realized. What I had understood as “hassling” was more just friendly human contact, and there is an overlying social openness which really inspired me.

3. How long has rollerblading been a part of youth culture in Dakar, and what lead to the popularization of this activity?

The skate scene there is huge. I guess skates taking 80mm wheels and above means that it might well be the one extreme sport that can be done on such poor paving. Also they have “Street Marketing” programs where skaters skate the streets throwing flyers through car windows, so there's work in skating. They are also very well organized, and very welcoming to new skaters. Accro-Rollers have a school where everyone is invited to learn, and this means that the scene is always healthy and growing. We could all learn a lot from Accro-Roller.

4. It is evident that fashion is an integral part of the events with people using designs as a form of cultural expression to accompany the artistry within the rollerblading scene, what are your observations of this form of display?

In the case of this event there was visual arts, skating demonstrations, music, artists, and fashion all combined. This is the first time I have seen this type of combination event, but it meant that it was really a visual feast from start to finish. There are some incredible fashion designers in Dakar – I met a couple. Creativity, colour, flair...the lot!

5. What are the perspectives of the participants, what do they think about the opportunity to combine athleticism, innovation and collectivism?

Well the event aims to stimulate these poorer neighbourhoods and bring in a hurricane of inspiration and creativity. All the different elements have been combined in the past by the different groups of artists, and you found that some of the fashion designers also skated, and they had all travelled together to dislplay their skills together as a group. There is a really great sense of harmony between the different disciplines and a lot of “love” compared to other similar events where different sports or activities feel the need to “beef” on each other.

6. From the pictures of the Dakar event, it appears that there are far less women that rollerblade, do you think that the movement will become inclusive with time, what can be done to encourage more female rollerbladers and strengthen the visibility of the ones that exist?

Actually the percentage of woman rollerbladers is not so low in certain styles of skating. Slalom is a popular type of skating that attracts women, also of course the Fitness aspect of skating has always been popular with women. Aggressive inline skating doesn't tend to have many female fans (allthough there are some really great women aggressive skaters) it's really is very hard on the body, and not much of a “sport.”

7. You get a sense that audience participation has a distinct role in creating a sense of atmosphere, could you describe the different reactions that the audience has and how the participants interact with them?

Depending on the type of person you are, it's nervewracking. Some people love being the centre of attention, and grow while they skate in front of a crowd. Others just turn into a nervous mess that cant even roll straight. It helps when a crowd is watching and enjoying the show, because in some cases you can find that you are in front of a hostile group of people that can't wait to see you fall. It's a very different energy! In Dakar the crowd was made up of about 100 children who LOVED everything, the jumps, the falls, the skaters...claps and screams of joy for everything, and that's never a bad crowd, that's when it's really fun!

8. You're a great DJ, tell us a bit more on the deejay scene in Dakar, your perspective?

Scary as it gets. The crowd know exactly what they want to listen to, and don't have time for anything else. A really great DJ from Spain was playing before me, and they decided after about 3 tunes they didn't like what he had to play, and they “removed” him from the decks. Neither of us had ever seen anything like that and it meant when it came close to my time to play I was 10 times more nervous than I had ever been. In every other country I have played the crowd will give you a good chance to show what you have, in this case it was “If you haven't played the exact tracks I want in the first 5 minutes you are getting booed off.” Luckily, it worked out great for me and my set went down a storm...phew!!!!

Find out more about Oli and his sport at USD Skate, The Conference, or his sponsor Inercia.

Check out all of OKA’s African Minute interviewees – folks whose work reflects a new perspective of Africa: