Apple's Black Emojis Are Coming (But They're Not The First) 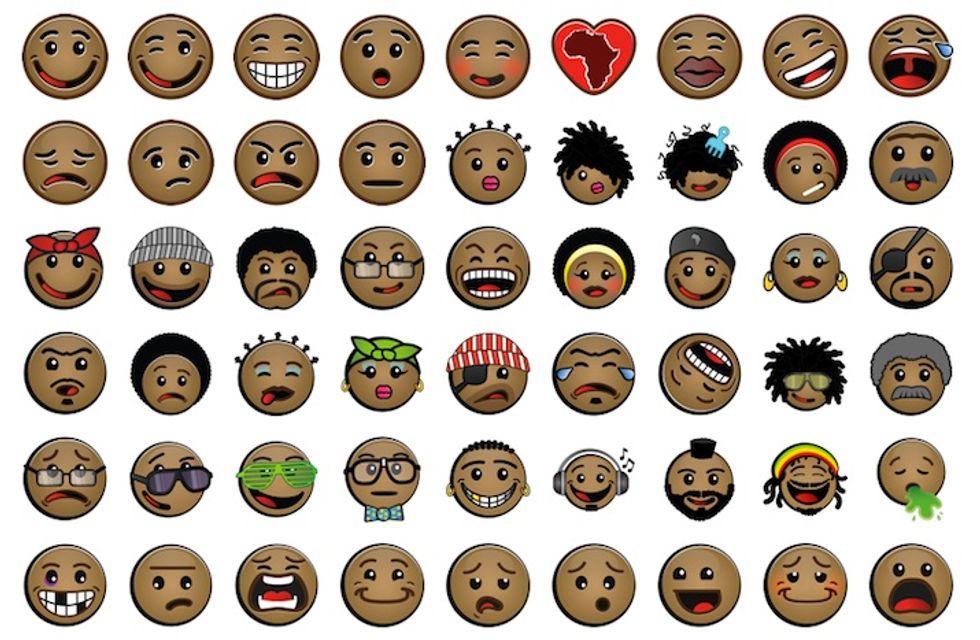 Apple's black emojis are on their way. As 9to5mac reports, this morning Apple released a new beta version of iOS 8.3 for testers that includes a more racially diverse character set, which allows users to pick from a palette of skin tones on several different emojis. Users will soon have the ability to click and hold on emoji characters (the ones intended to be people) and select from an option of six skin tones-- which we presume are along the Fitzpatrick Classification Scale. According to The Next Web, there's still no release date for the new emoji features, but Apple is reportedly planning a public beta program to kick off in mid-March. Regardless of when they do launch, though, Apple still won't be the first company to introduce black emojis.

Last April, Mauritius-based app company Oju Africa launched a range of 65 "Afro Emoticons." At the time of their release, Oju (Yoruba for "face") touted their afrocentric emojis as the first ethnically diverse emoticons. "It's very important for us, as a small African company, to make it known to the world that we were the first to do it," the company's Ugandan-born chief executive Alpesh Patel told CNN.

Patel, whose company began developing the icons in late 2012, says they moved up the release date for their Emoticons in response to a public demand for Apple to diversify their emojis — a call that began with a tweet from Miley Cyrus ("RT if you think there needs to be an #emojiethnicityupdate," Cyrus wrote on December 18, 2012). On March 25, 2014, Apple's Katie Cotton (VP of worldwide corporate communications) told MTV the company is working to diversify their emoji character set. As discussions surrounding an "#EmojiEthnicityUpdate" began to spread online, Oju announced they'd already been working to develop black emojis. According to Patel in an interview with CNN, "The reason we launched it [the Afro Emoticons ahead of schedule] is because of this petition from Miley Cyrus and MTV — petition to Apple CEO complaining about the lack of racially diverse emoticons and Apple said 'yes, we're going to look into it.' But within a couple of hours of seeing that, we put our press release out and already claimed ownership — that we have actually developed this already." The first version of the Oju emoticon app has been available for download via Google Play since April (almost a year ahead of Apple's forthcoming black emojis).