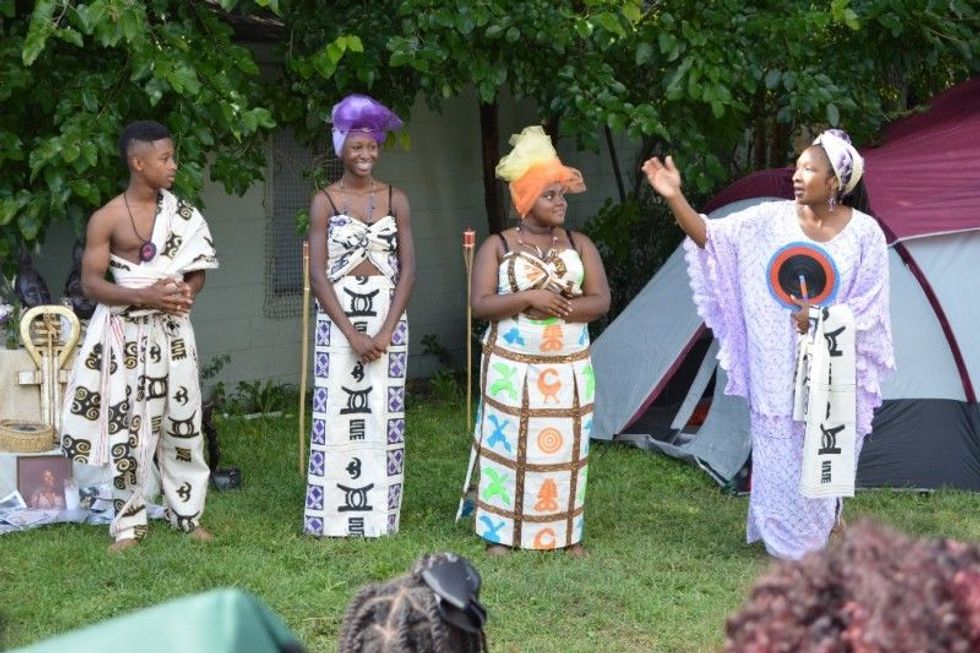 We talked to the mom in the viral video "Family dollar fiasco (Sandra's Racist Ass)" about the outburst and Indiana's Wakati tribe.

Last week, a video went viral of a mother confronting a Family Dollar employee about a racist comment aimed at her kids. “You are going to apologize to my children for your little racist-ass comment,” she says before raising the volume. “Did you ask my son if he was about to go trick-or-treating because you saw him in cultural wear? Fucking apologize. Get your manager on the phone,” she yells.

Some shared it with a sense of wonder. Others with outrage. Many, especially outside America, simply expressed confusion. With over 22 million views on Facebook and over 146,000 views on YouTube the three minute video certainly struck a nerve.

In the video Mabilijengo is with her three children (including her 20-year-old daughter doing the recording) who are dressed in the West-African looking garments that spurred the comment from the cashier. Many online commenters, in the grand tradition of respectability politics, felt the need to condemn Mabilijengo’s way of handling the situation. But after a 30 minute conversation with her, it’s clear she was doing what any other mother would have done in her situation—protecting her kids.

“The manner in which I addressed the cashier is not my norm, and although that is not a primary concern, I think it is relevant,” she tells Okayafrica. “I chose to address the cashier the way I did because I felt it warranted that type of response.”

For Mabilijengo, what could’ve been a teachable moment was instead an opportunity to teach the cashier to think twice before approaching her children, and other people’s children the way she did.

“We expect children to be adults, and they are not—they are children,” she says. “We have a real problem with not checking—particularly white America—when it comes to its lack of tolerance of other cultures. The arrogant idea or notion that simply because you are present in this country, you must assimilate and look at all times like the people who are the 'ruling class' of this country, is appalling to me. At some point, the responsible adult needs to be response-able.”

Mabilijengo is a member and chief of the Wakati community—“a tribe of Afrikans born in the Diaspora with ancient matriarchal values.” The community connects to a diasporic network from across the country of communities who are interested in connecting their lives with African cultures and traditions prior to the Trans-Atlantic Slave Trade. Her home-schooled children wore those particular garments into the Family Dollar store for a reason, that if the cashier had just asked with mere curiosity, she would know that reason too.

“They recently completed their rights of passage,” Mabilijengo says. “They sacrificed their summer, where they spent three months hand painting their first ceremonial garments—it was tedious to say the least. Once completed, they designed and created the garment they wore. We just finished doing a photoshoot with their garments on before I sent them to the store to run a simple errand.”

A very proud mother, who emphasized throughout our conversation that her children are well on their way to do wonderful things in life, she finds comfort knowing that they know that she will be there to defend them at all costs.

“They are feeling thankful, one of my daughters said just that—'Thank you, I’m so glad you’re my mom,’” she says.

However, along with the virality of the incident comes with backlash and negative response that moved another one of her daughter to tears, especially regarding speculation that this incident was a setup for people to donate to her GoFundMe campaign where she’s seeking support to send her children to study abroad for a year.

“I did start a GoFundMe because they were already scheduled to go to Belize for a year, this coming year, and a lot of people think, ‘Oh, she is trying to exploit these children,’” she says. “That just goes to show a lot of people don’t take the time to know what they are talking about.”

Reactions to viral content on the internet—whether positive or negative—have an impact on those appearing in the videos. Mabilijengo ultimately wants the hype and focus around her actions to be redirected to the potential of her children.