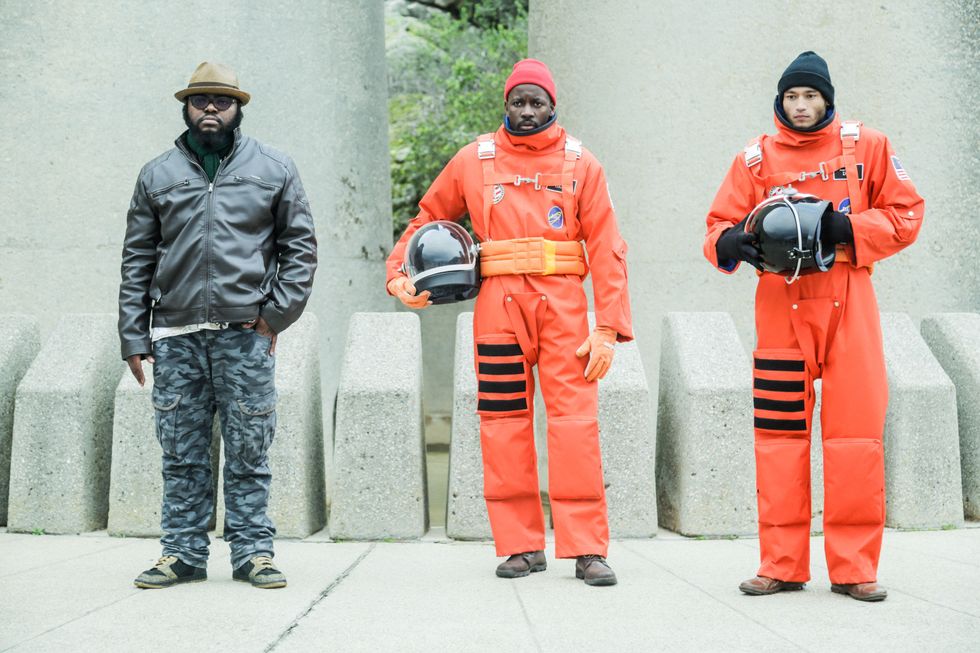 When futuristic Namibian rap trio Black Vulcanite burst onto the southern African hip-hop scene in 2013, they brought with them an air of consciousness that had been missing for some time. Ever since Tumi's Once Upon a Time in Africa and Zubz's Get Out, SA hip-hop had been missing the unspoken truths we were all witnessing but could do little about. Black Vulcanite's Remember the Future, however, foreshadowed a rise in black consciousness throughout southern Africa. They've been relatively quiet since then, but with the rise of #FeesMustFall in South Africa, #ThisFlag in Zimbabwe and various other protest movements throughout the region, there’s perhaps no better time than now for the group’s return.

Despite the distance now between them – Ali is in Namibia, Mark has been travelling throughout Europe and Niko is in Beijing – the trio is back this month with another thought-provoking catalogue. Black Colonialists, their 22-track sophomore effort, is gutsy, sincere and insightful, peppered with intergalactic fiction and time travel.

The first track they recorded for the album, “Jupiter’s Love,” is an ode to the ever-elusive “woman of their dreams.” The song’s video, which we’re excited to premiere here today, is an exquisite reclamation of space at the Afrikaans Language Monument, also known as the Taal Monument in Paarl, Cape Town. It sees the group team up with Zunaid Green and the rest of The Visual Content Gang. In the conversation below, Black Vulcanite take us inside their galvanizing new project.

The title track, “Black Colonialists,” opens the album. Can you elaborate on your intent with this project.

We chose the title “Black Colonialists” to set the theme for what the entire album is about, namely the occupation of economic, cultural, futuristic and historic spaces that haven’t always welcomed a black presence. The words often carry a negative connotation, so using the title is a repossession of meaning in itself. It's an ode for all the people of different cultures who are defying stereotypes and taking on complexities that are not afforded to people of color. We are forced to rest in places with limited mobility, told what we are and what are are not.

This album, in the words of Saul Williams, speaks truth to power structures that box us in. The theme of course also forces us to reimagine the colonised and coloniser dialectic, using afrofuturism to reconcile challenging historical realities, forcing us to confront victimhood and instead imagine the diaspora not as a tragedy of stolen human potential but an unwitting invasion of all the places where black people had little influence.

Choosing this title was also about holding Africa’s enemies accountable while reclaiming narratives, looking at the transatlantic slave tragedy, Haiti, Jamaica, Portugal, Spain, as our own unique opportunities to influence culture and ultimately the future of our civilization.

Why did you pick “Jupiter’s Love” for the first video?

"Jupiter’s Love" is the first song we wrote specifically for this album. We wanted to shoot it because it is sublime in terms of subject matter. A compromise between our staunch political stance and playing to the taste of the market.

Shooting at Taal was of course very significant, especially given how problematic brutalist architecture can be. The monument is often seriously implicated as a vestige of apartheid modernity that locates past-aggressor political communities in “post-apartheid” society. Although the monument is much more than a commemoration to Afrikaans culture and settler history, we felt that it was important to perform our song there to dismantle the grip of the apartheid legacy and give way to a more progressive conversation on land and citizenship.

On the first track, you mention an “African Student Socialist Space Program.” What’s the link between this very afrocentric narrative and thoughts about space and futurism?

The African Student Socialist Space Program is an extension of the Zambian space programme of 1964, something that is seen as Africa’s laughable attempt to participate in the space race.

We decided to build on this idea and revitalise it because we felt it had a strong mythology, something that would inspire the very capable Africans of today to start dreaming again, to unite and collaborate towards a viable space programme which from a world view demonstrates the full scientific capabilities of any group of nations. We are still hopeful that one day we will see a concerted effort from African scientists to do something great. Of course these days, space is the place. Futurism just so happens to be the most effective lens of imagining and inspiring this kind of future.

What are your thoughts on African identities? What does it mean to you to be African?

Well at least to us, identity is about shared values... it’s hard to think of shared values for Africans in this colonial hangover that we are currently in though. There is a deliberate effort from the part of white capital to see that any ideas of a shared African identity remains fragmented.

The closest we’ve come to a shared African identity is Ubuntu, which is supposed to be the characteristic spirit of the African zeitgeist, but we wonder if it didn’t come a little too late. We’d like to think that being African is supporting all the positive values of African society, things like Ubuntu and self-determination, but in truth it would need to be a negotiation of African greatness in antiquity, colonial trauma and the idealism of present day.

It goes beyond [Thabo] Mbeki’s speech. To call it one thing would undermine the plurality of cultural values and identities that exist in different parts of the continent but to call it constructed also de-legitimises one shared African identity which exists for most parts of Africa. A more personal definition would be to say being African is viewing the unique culture and history of this continent as an opportunity and using it to become difficult to exploit.

Black Colonialists is out now and available for purchase on iTunes here.