How to Rap About Africa: Remembering When Binyavanga’s Iconic Essay Was Turned Into a Scathing Rap Song By Black Vulcanite 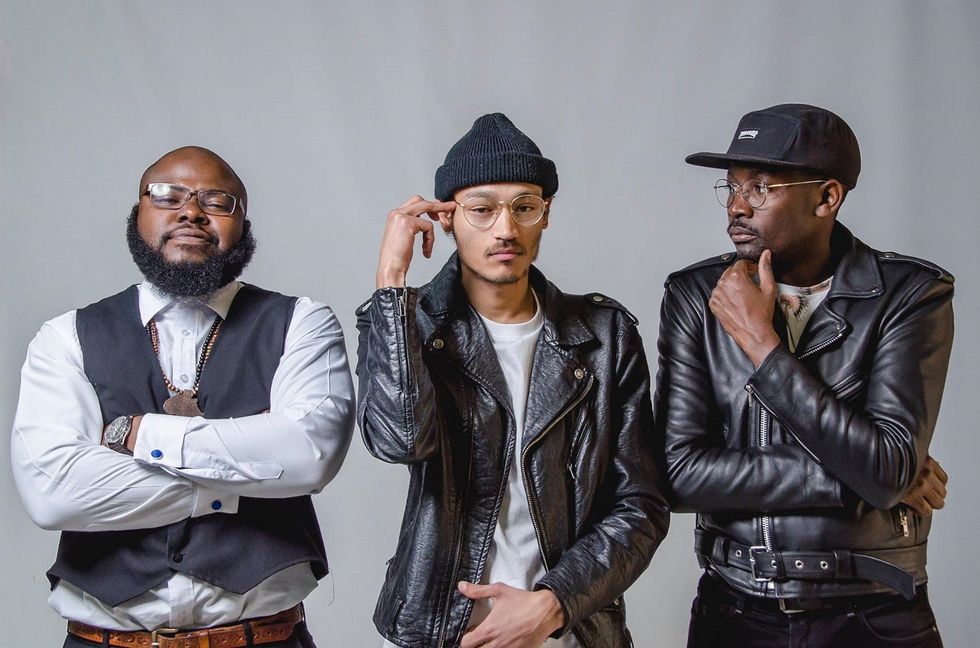 In 2016, the Namibian hip-hop crew Black Vulcanite turned Binyavanga's iconic essay into a scathing rap song 'How To Rap About Africa.'

One of Binyavanga Wainaina's most popular essays, 2005's How To Write About Africa, which was later turned into a book, is one of the most effective pieces about the stereotyping of Africa ever published.

In it, the author, who recently passed away, gave a tongue-in-cheek guide to writing about Africa for foreigners.

"Always use the word 'Africa' or 'Darkness' or 'Safari' in your title. Subtitles may include the words 'Zanzibar,' 'Masai,' 'Zulu,' 'Zambezi,' 'Congo,' 'Nile,' 'Big,' 'Sky,' 'Shadow,' 'Drum,' 'Sun' or 'Bygone.' Also useful are words such as 'Guerrillas,' 'Timeless,' 'Primordial' and 'Tribal.' Note that 'People' means Africans who are not black, while 'The People' means black Africans," he wrote, adding, a few lines later: "In your text, treat Africa as if it were one country. It is hot and dusty with rolling grasslands and huge herds of animals and tall, thin people who are starving. Or it is hot and steamy with very short people who eat primates."

Eleven years after Binyavanga's essay, three Namibian writers—rappers Mark Mushiva and AliThatDude and poet Okin who are collectively known as Black Vulcanite—took a leaf from the author's book in their song "How To Rap About Africa," a title that's an obvious nod to Binyavanga.

On "How To Rap About Africa," a deep cut from their debut albumBlack Colonialists (2016), the trio deliberately make reference to the stereotypes the West has about the continent. But the twist is, unlike the essay, the song isn't a guide, but an interrogation of the continent's present.

It's the MCs' choice of words that references How To Write About Africa. The most obvious is on the hook, performed by Okin; he chants most of the stereotypes Binyavanga brought up in his essay: "Black, genocide, famine, apartheid, kaffir, safari, Buddha, slavery, Namibia, civil war, Congo, primordial, poverty, gorillas, malaria, AIDS," as a group of protesters join in between every word.

The imagery deployed by Mark and Ali paints a grim picture, the point is that Africa is a seriously complex continent, and shit can get real for you if you don't watch yourself.

On "How To Rap About Africa," Mark talks about the ills faced by modern Africans, from corrupt politicians, who he refers to as "hyenas," to the taxing effects of capitalism. He raps:

"This is Africa, and here the currencies favour/ The hippos that it made, tell me what you have to trade/ You wanna build a pipeline, you have to wash some hands/ Hyenas manage tenders, eat meat by the gram/ Eat meat like the lamb/ NGOs don't stand a chance"

And then later, "Ain't shit changed, we got this independence of ours/ Cuz the zookeeper simply extended the bars/ We're still caged, debt unpaid, more aid/ Home sweet home mortgage/ Got two more days till the last payment."

In the last quoted lines, the MC talks about how our leaders are our new oppressors—the word "hippo" is a play on the safari concept, but it also refers to the wars that are still ongoing in some parts of the continent. "Tender" is cleverly placed just before the MC mentions "meat" and "lamb."

But what hits home is how he dispels the concept of freedom in a system where we have to depend on money to even have a place we call home. The continent is in huge debt, and so are most individual middle and working class Africans.

When he raps, "Went from the bushveld to the harsh pavement," he is speaking to how civilization brought with it a lot of suffering, as many Africans find themselves in the fringes of the system, both physically and systemically.

He further looks at how media is still biased towards western standards of beauty, rapping: "They say we light years from Kwame's dream/ There's only light women in magazines/ Man, I don't even like women in magazines/ But it seems, western vaccines all we need."

Ali's verse is scathing towards politicians, he labels them "the African black mamba" (because really, they are), and describes a hostile environment in which the rich (lions) hang out with your woman (gazelle) in a watering hole.

Both Ali and Mark refer to places like clubs and bars as "watering holes." While Mark refers to politicians as hyenas, Ali speaks of criminals as hyenas—great imagery considering the predatory nature of politicians and criminals of all sorts.

Ali raps, "One drop from his venom, make your body go numb/ The African black mamba, scaly politician/ Hyenas never wander far, they out to mission"

Unlike a tour guide, he will take tourists to parts of the continent where it's not safe for them and anyone else. He will take them on a "a slum safari, no white sand beach" where "every white man out here is just fresh meat."

After all, these tourists stand out and are easy targets, no matter how hard they can try to blend in with their surroundings—a zebra always stands out because of its stripes. He raps:

"European looking zebra tryna blend in the grass/ This is not your habitat and we all can see/ The scent of fear in the air every time you breathe/ It wouldn't happen to me, my wild dog pack deep/ Four claws, four paws, set of canine Gs"

"How To Write About Africa" plays out like a fable, which is a prominent literary genre that has been widely deployed by Africans for the longest times in educational fairy tales and literature. Just like many folk tales, the song "How To Rap About Africa" is up to the listener's interpretation.

Black Vulcanite are among many rappers who have used jungle imagery to interrogate their surroundings. Pharoahe Monch also did it on "Jungle" when he played around with the concept of crime riddled cities being jungles: he mentioned Chicago, Cape Town and Joburg among others. Stogie T, while still rapping under his birth name, opened The Journey, his collaborative EP with Chinese Man with the song "Jungle Boogie," where he raps as a satiric tour guide that will show you around the safari.

The progressive politics and nuanced views of the continent on "How To Rap About Africa" make more sense in the context of the album the song is a part of. Black Colonialists, the trio's debut, explores the position black people occupy in the world today with our history of colonization and displacement. In the album, the trio break down how us finding ourselves in the diaspora could be leveraged towards our advantage, hence the term "Black Colonialists."

In a 2016 interview, Mark Mushvia put it this way:

"The title was to set the theme for the album which pronounces a massive economic occupation of our artistic, economic, cultural, futuristic [and] historic spaces which have been traditionally overtly white. And we also wanted to upend the dialect of a colonizer and shed this cloak of victimhood that we're always draped in, and saying we are viewing all the tragedies that happened — the transatlantic slave trade, Haiti, Jamaica, Portugal, Spain — not as tragedies but as unique opportunities for the diaspora and African people to go out and influence the greater parts of the world. In a way, colonise them."