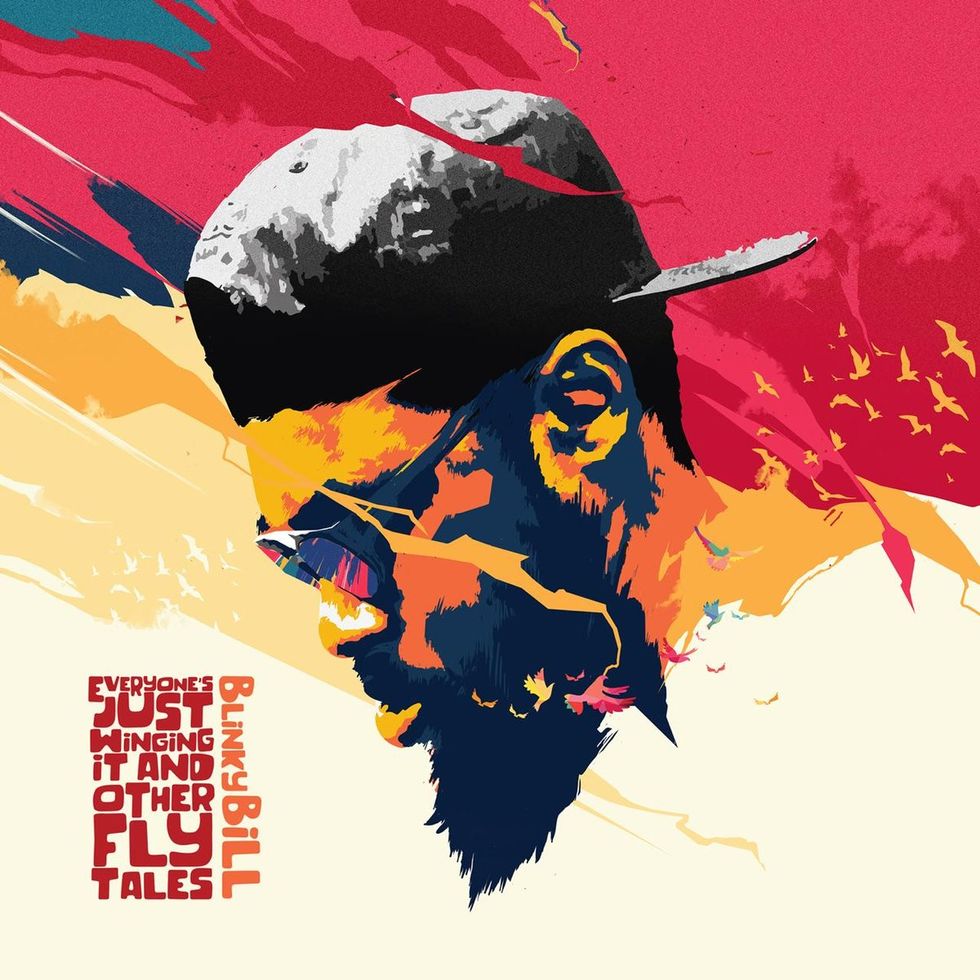 The prolific Kenyan beatmaker Bill Sellanga is back with his eagerly-awaited debut solo album, Everyone's Just Winging It & Other Fly Tales.

Blinky Bill is not new to the game. As one of the founding members of Kenya's most famous alternative music collective, Just a Band, he already has an extensive body of work under his belt.

In their heyday, Just a Band revolutionized the Kenyan music scene with their genre-bending style and uniquely-produced visual treatments. Their avant-garde approach to music and art led to global recognition, the production of Kenya's first viral video and a direct influence on the next wave of Nairobi's creative daredevils. Now on hiatus, the band members have set out on their own solo endeavors. For Blinky Bill—DJ, rapper and producer extraordinaire—a solo album has been a long time coming.

On Everyone's Just Winging It & Other Fly Tales, Blinky reinvigorates his passion for experimental beat-making. He weaves African rhythms together with electronic cuts, hip-hop and funk in order to attain a hard-hitting, inventive and sublime body of work.

Though lengthy, the album title is catchy. It presents the simple idea that no one really has it all figured out, that human beings are moving through life as they cope with the ups and downs of the world we live in.

The album opens with an upbeat, bass-heavy intro titled "Lwanda Magere," an ode to the mighty warrior famous in traditional Luo folklore for having unearthly supernatural powers.

On the next track, Blinky surprisingly leans to the mainstream more than ever,"Continue that way and I think I'll wife it/ I need someone I can face real life with." With its towering horns and heavy percussions, "Atenshan" is a flamboyant centerpiece that will get the dance floor bubbling.

Blinky plays around with his vocals just as much as he does with his beats. He alternates English and Swahili lyrics, while skating between singing and unvarnished rap-talk in a way that does not seem forceful or contrived. He comes across as if he is freestyling the entire time.

On "Bills to Pay" he laments about people owing him money over a tasteful hip-hop production that evokes some '90s nostalgia. The album accelerates once again with the droning and pulsing electronic beats of "Don't Worry," which along with songs like "Feelin' It" and "Atenshan," is one of the louder cuts in the project. These songs jump out of the speakers with a rage that would probably translate spectacularly on the stage.

The album is garnished with a number of impressive and spontaneous collaborations that include Sampa the Great, Petite Noirand Nneka. He also enlists his protégé Sichangi, and Kenyan sensations like Muthoni Drummer Queen and Sage in the 12-track project.

In Nairobi, Blinky is also known for his bold and colorful taste in fashion. His bright-side personality and authentic charm also manifest themselves in his music. He creates vibrant, energetic and groovy soundscapes with fun-loving tracks like "Happy", "Winner" and the album's first single "Showdown"—a deftly-produced banger that is only let down by lackluster guest verses.

It's hard not to be spellbound by Sampa The Great's poetic and thought-provoking delivery on "Let That Go" or the uplifting nature of "Mungu Halali"—a semi-gospel beauty bursting with soulful optimism.

The album takes a socially-conscious turn on "Oh Wah" as Blinky reflects on Kenya's unhealthy politics and the inaction of the government and its citizens to make integral changes. Nneka's plaintive vocals contribute to the striking intimacy of this crucial track.

This album has a sound that is both similar to his older work and a musical representation of a creative evolution. He draws from a range of influences stemming from eras both old and new. For him, the only rule is that there are no rules, and in that sense this makes for a brilliant and comfortable debut.