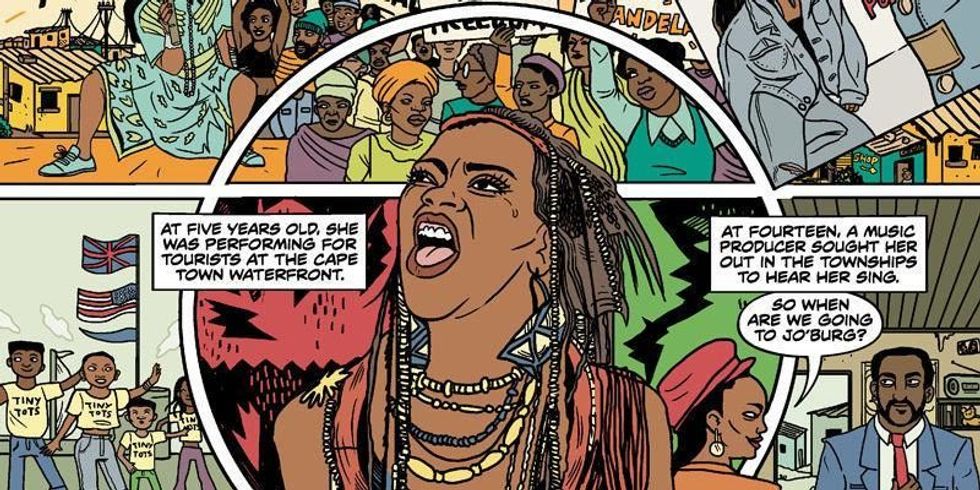 Femme Magnifique: A Salute to 50 Magnificent Women, a collection of "comic-book stories [that] celebrate women who crack ceilings, take names, and change the game," as described in their Kickstarter page, also highlights the likes of Nina Simone and Michelle Obama through animated anthologies, reports Konbini.

Beukes had many women to choose from, of course, but Fassie's one-of-a-kind persona and unparalleled contribution to pop culture made her an obvious choice.

🔥 @laurenbeukes and I in the paper today for our contribution to #femmemagnifique - a short tribute to South African pop star legend #brendafassie aka #mabrrr. edited by #shellybond and coloured by #brianmiller. 🔥

“I had many to choose from, from Lilian Ngoyi to Ruth First, Krotoa Eva and Sara Baartman," she told Brand South Africa. “But Brenda Fassie worked on so many levels, as a provocative pop star, as a lesbian icon, as a black woman who lived through apartheid and sang about the personal and the political.”

Cape Town-based graphic artist, Nana Venter, is behind the intricate illustrations which accompany the 3-page story. "Brenda was the first person to say that she ultimately ‘belonged to the people," says Venter. "She had an immense celebrity which has always been well-documented, and part of the public domain in South Africa.”

We named Fassie in our list of 12 Iconic African Women Who Have Shaped Our Culture back in May.

Check out a preview of the story below. The full Femme Mangifique installment is out September 27.