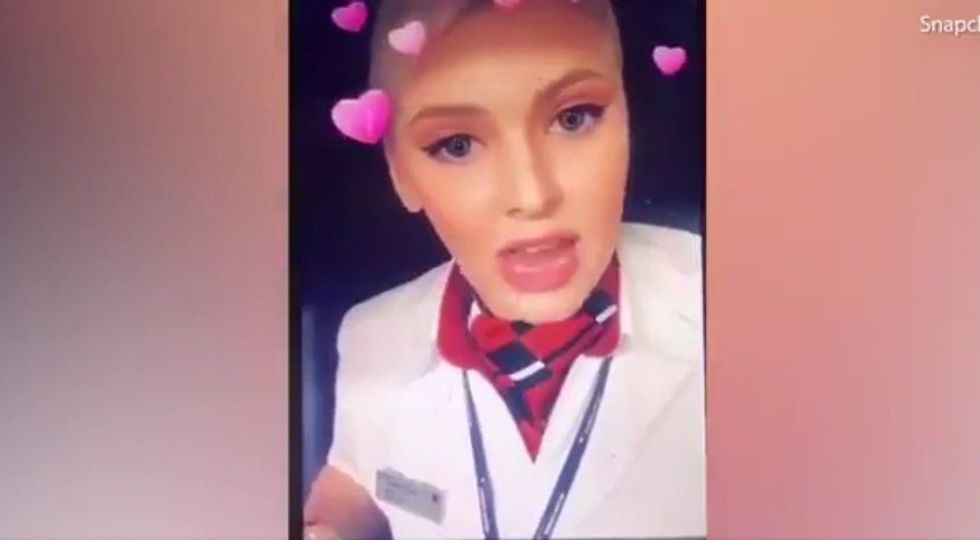 A British Airways employee who posted a video on Snapchat of her mocking Nigerian passengers has now been sacked.

A British Airways flight attendant who came under fire yesterday for posting a derogatory video showing her mocking Nigerians and making vulgar remarks about the size of Nigerian men's genitalia has now been fired, reports Daily Mail.

In a series of videos posted on Snapchat on Friday, Joanne Wickenden, a 23-year-old hostess and aspiring actress, can be heard complaining about Nigerian passengers asking for upgrades. "All the Nigerians are gonna be there like "gimme Coca Cola, gimme me beef, why you have no beef left? I want beef'," she said using a much Nigerian accent. She proceeded to make crass jokes about male body parts, claiming that Nigerians would ask for more leg room to accommodate oversized genitalia.

Wickenden is now claiming that the rant was a joke, and that she was provoked by her coworkers."I have been framed by another BA employee. They were encouraging me, egging me on to say things. They were recording me and sent it around to our friends," she told the Daily Mail. "I am not a racist."

Her claims of innocence did not stop the airline from sacking the hostess this morning, confirming that "she no longer works for British Airways."

"We expect the utmost professionalism from our staff when they are representing British Airways," said the airline in a statement on Tuesday. "We will not tolerate offensive comments about our customers and will always take the appropriate action."

Several folks have reacted to the crude and racially insensitive video on social media on Tuesday.

For one, I and a lot of people I know avoid flying @British_Airways from and to Nigeria becuase of how they treat Nigerians.

If you're Nigerian and you have any sense, you would have stopped flying @British_Airways long time ago. Way long before this in any case

@British_Airways clearly you guys have seen this disgusting video? How exactly are you investigating? #britishairways #baraciststaff pic.twitter.com/r4hf355n4y

What's the difference between the @British_Airways hostess who made racist comment against Nigerians and PMB who called Nigerians criminals?

This Queen language sef, it can make somebody get headache. This should be subtitled in English. pic.twitter.com/TrozMRvblR

If you simply don’t know what to say please keep quiet. By all standards this is racism. She went too far wth this nonsense @British_Airways

This is what @British_Airways have come to?

As a Nigerian, and a gold card holder, this makes me sick @British_Airways !!! 😡😤https://t.co/mcga6TzjJp via @MailOnline

While we've seen airlines ignore such incidents in the past, we're glad that, at least time around, action was taken. Good luck with your acting career, Wickenden—or not.