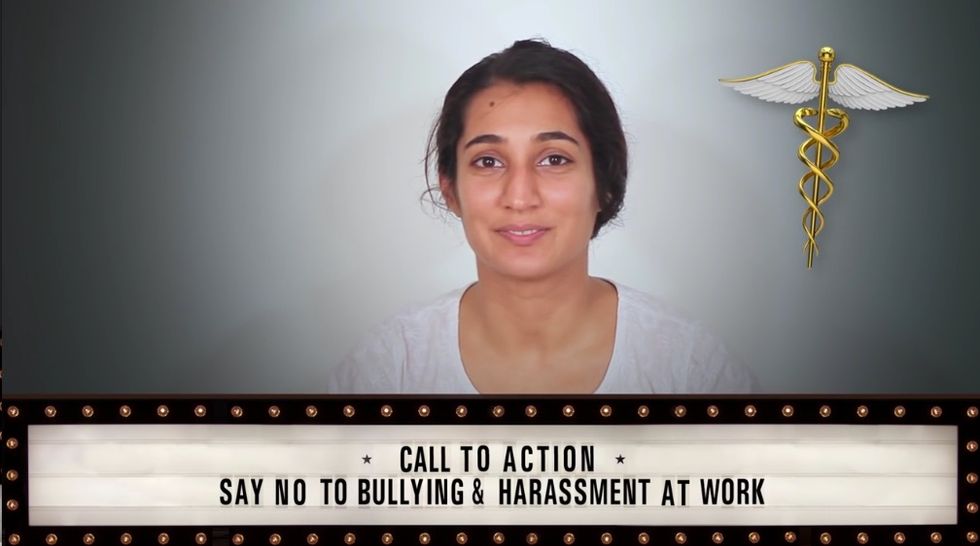 One brave junior doctor in South Africa has taken on the task of raising attention to the medicine world’s systematic culture of abuse.

Being a medical doctor doesn’t always equate to human decency. And it certainly doesn’t exempt you from sheer idiocy and maliciousness.

One brave junior doctor in South Africa has taken on the task of exposing the medicine world’s systematic culture of abuse.

Yumna Moosa, a 2012 medical graduate of the University of Cape Town, had just started an internship at a hospital in KwaZulu-Natal when she began to experience harassment at the hands of her supervisor. In an interview with The Daily Vox, Moosa explains that she responded to the incidents, which started during her first week at the hospital, by speaking to the individual perpetrator, then the head of the department and then eventually via written feedback.

“Things became more formal after the conversations in which I was told that if there was only a written complaint, then it did not really happen," she tells The Daily Vox. “There were many, many incidents. He said my body was a distraction... He touched my chest... He quizzed junior colleagues about their pornography and suggested that Muslim doctors were bad at their jobs and should become terrorists instead." In that same interview, Moosa mentions she overheard another senior doctor tell an intern “You’re being stupid like a black person."

Her complaints were brushed aside.

On Friday, Moosa shared a video that has many South Africans in shock. And for those inside the medical world, perhaps less shocked. The video, titled “Secret recordings EXPOSE bullying of junior doctors,” has already surpassed 40 000 views.

It opens with a call to action: “Say no to bullying & harassment at work.”

Moosa proceeds to explain why she no longer wants to be a doctor. “Last year I worked under a man who sexually harassed me,” she begins by stating. “It wasn’t only me; it wasn’t always sexual; it was open; and it was everyday.”

“Humiliating and degrading lower-ranking doctors is a big part of medical education,” she explains. Her harasser is an award-winning teacher. “I had to say something,” she shares. “I had my phone with me while the hospital management explained that actually, there was nothing wrong with my supervisor’s behaviour.”

Throughout the rest of the video, senior staff members at the hospital can be heard rebutting Moosa’s complaints. Their reasoning? The most illogical, immoral excuses imaginable.

Racism is the first beast the video tackles. The two doctors can be heard telling Moosa her supervisor’s comments are not in fact racist because, according to their logic, there’s a difference between racism and individualising.

They move on to sexual harassment. “If he makes the remark and I’m comfortable with that remark, then it’s not sexism,” insists the female doctor. “Friendly banter,” adds the male doctor. Moosa asks if that means that in order for sexual harassment to have occurred, every woman that has ever spoken to the doctor needs to feel uncomfortable. “Yes, that’s the definition of sexism,” the male doctor responds matter-of-factly. According to that same logic, if a single woman doesn’t mind being told that women are stupid, irrational and incompetent, then it’s not actually sexism.

Moosa speaks to the head of the department next. He contends that if an incident doesn’t result in a formal hearing, then it didn’t really happen.

After that conversation, Moosa found five separate junior doctors who had submitted written complaints about the behaviour of senior doctors at the same hospital. Yet none of these complaints became formal. Why? The next asshole of a staff member Moosa speaks to makes it perfectly clear. According to this doctor, she shouldn’t want to be “the loner” who speaks up when everyone is “happy with the current setup.” According to this doctor, sexism in the workplace is a problem only for Moosa.

“I’ve been in this game a long time. I’m telling you, grow up. Act like a doctor and you’ll be treated like one. Act like you’re a little spoiled brat and you’ll be treated like one,” he says before advising Moosa to purposely lose her medical internship experience logbook. It’s the same book that contains feedback about the harassment, and it’s the only book that contains the full record of her two years of supervised medical work as an intern.

Moosa opted not to throw it away. But then she was told she couldn’t continue with her career. The head of the department called her “unsafe.” Her career was sabotaged. The Health Professionals Council of South Africa ultimately overturned the department’s decision, thus meaning Moosa could in fact work as a doctor. But she didn’t want to.

Which leads her to the next question. Why would she go to the lengths of posting an entire video explaining why she doesn’t want to become a doctor?

“I’m doing this publicly because I want to raise attention,” Moosa shares. “Every day, other junior doctors in South Africa and around the world are subject to the same kind of institutional coercion that I was. Stop putting up with this. As a former doctor, I have nothing left to lose. I can take some risks and hopefully show how the law will provide support. Meanwhile, those with influence must deal with the systematic culture of abuse in medicine.”

She goes on to liken medicine to a military hierarchy. “Juniors are constantly told this is what your seniors went through, and we must just do our time and get it over with,” says Moosa. And while some think the ‘just obey orders’ approach is the best way to deal with emergencies, Moosa genuinely believes in the healing power of kindness and mutual respect. “And the importance of honest communication for avoiding deadly mistakes, or learning from them.”

Ultimately, Moosa hopes to prevent others from having the same experience. And while she’s no longer pursuing a career in medicine, she’s ready for a new path. She’s currently registered to do her PhD in Bioinformatics at UCT.

In a statement, UCT’s Faculty of Health Sciences professed their support for Moosa.

“Racism and sexism have been embedded in the health services environment for too long. This is abhorrent and unacceptable. Senior doctors have the responsibility for coaching and mentoring junior doctors, nurturing values and practices imbued with the highest ethical care,” writes Interim Dean, Professor Gregory Hussey. “In a country where there is a critical shortage of doctors, where our juniors are the future of the health system, we can ill-afford to lose young newly trained doctors. We must build a health system based on equity and justice where everyone is treated with dignity and respect.”

Viewers are encouraged to share their own experiences with bullying and harassment in professional workplaces by heading to a Facebook page, Respect Your Juniors.